The Lost Generation: Forget Hillary Clinton's millennial problem — millennials have a problem we all need to fix

As both Clinton and Trump woo younger voters, we must recognize that millennials need an America that's yet to be 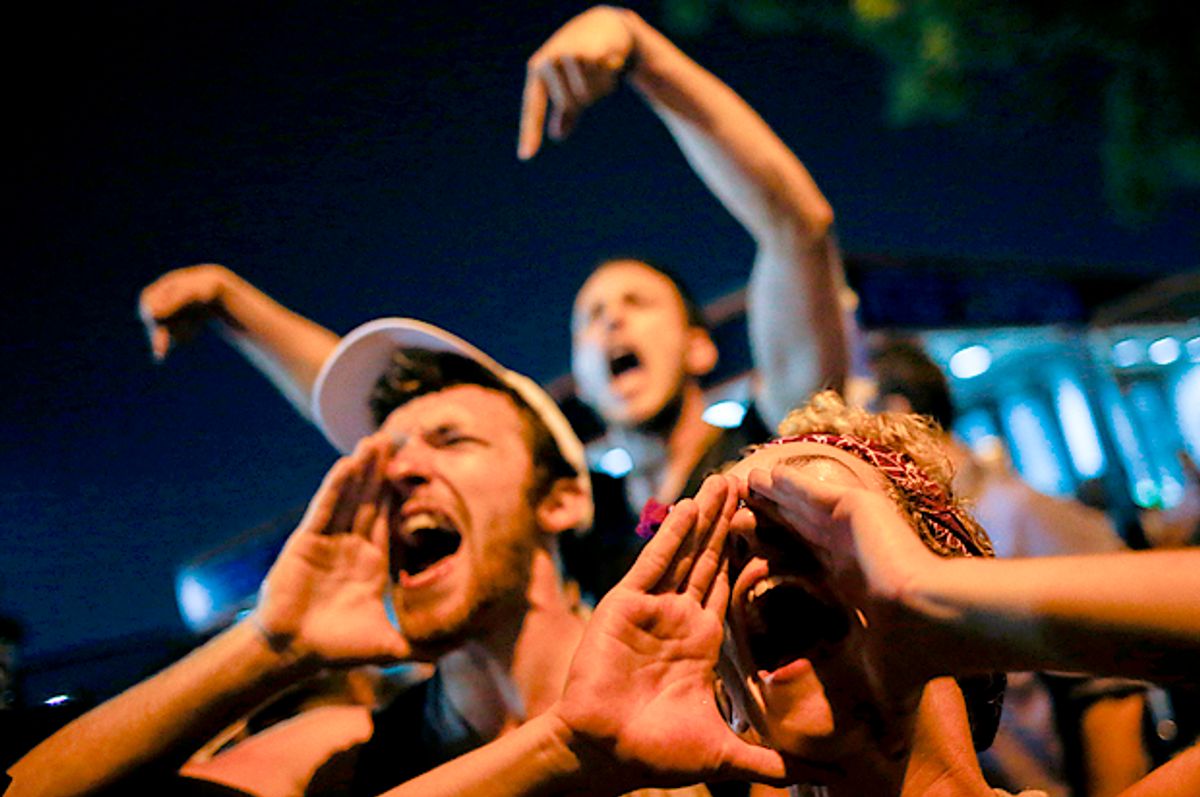 As Donald Trump and former Secretary of State Hillary Clinton prepare to debate later tonight at Hofstra University, multiple surveys indicate that the voting group most up for grabs is composed of the nation’s millennial voters, who could likely decide who is the next president.

They are also the most racially diverse. Almost 1 in 5 is Latino or Hispanic, 13 percent are African-American and 6 percent Asian, according to the GenForward Survey, produced by the Black Youth Project at the University of Chicago and the Associated Press NORC Center for Public Affairs.

While the same survey indicated that Clinton is favored by these younger voters, it also showed that “nearly a majority” of those surveyed perceived her as dishonest. A majority of the young voters surveyed consider Trump a racist.

So Just Where Did the Optimism of Youth Go?

Where Trump may have a small opening is in the collective assessment, across all racial categories in the GenForward Survey, that the United States is either falling behind, or outright failing.

Among whites, 56 percent say the country is falling behind, while more than 1 in 4 said the country is actually failing. The story isn't so different with African-American, Asian and Latino millennials: Two-thirds said they think the nation is losing ground or failing.

This pessimistic outlook is completely understandable.

For these younger  voters their American experience has been defined by the 9/11 attacks, the never-ending war that followed and the Great Recession, the worst economic decline since the Depression.

In 2014, the Council of Economic Advisors identified lingering impact of the Great Recession on the millennials as a long-term issue: Millennials “lives were shaped by the experience of establishing careers at a time when economic opportunities” were “relatively scarce” even though the economy was “well into its recovery” leaving its mark on this age group for years to come according to the panel that advises the president.

While boosters of President Obama pointed with pride to the latest federal data that showed a decline in poverty and an increase in the median household income, household incomes were still below their pre-recession level and well shy of their 1999 historical high.

The American Dream Is Deferred as Capital Screws Labor

This aggregate national data does not capture the sorry state of the millennial cohort nor offer insights into the sense that for members of this generation the so-called American Dream has been deferred.

For decades, as a nation, we emphasized just how essential a college education was to a successful life and then made it so expensive that college debt has exploded from $260 billion in 2004 to $1.36 trillion.

No doubt younger workers have not been exempt from the broader betrayal of the American worker since the 1970s. This year the Economic Policy Institute reported that from 1973 until last year, while productivity had increased by more than 73 percent, hourly pay for workers had only gone up by 11 percent. Or more precisely, productivity had grown by more than six times the wages earned by workers.

The confluence of these historical trends, which have been in many cases decades in the making, has radically altered the American household. According to the Pew Research Center for the first time in 130 years, millennials  are now more likely to be living at home with their parents than “with a spouse or partner in their own household.”

In the most recent American Community Survey, out earlier this month, New Jersey led the nation in this mega trend, with 47 percent of millennials living at home with their parents.

In New Jersey’s Hunterdon County, more than 60 percent of millennials are still at home. “When you extrapolate the trends in Hunterdon County you’ll have two types of adults in the future; the unwed and nearly dead,” said James Hughes, the dean of Rutger’s Bloustein School of Planning and Policy and a expert on economic trends.

Hughes said the aftermath of the Great Recession has been particularly hard on millennials. “Basically, we have a situation where millennials have heavy student debt which takes a big bite out of their monthly paycheck,” Hughes told Salon. “They have very high bills in information technology for their cell phones and [laptops] and tablets and the job market has not been particularly kind to them.”

“You put that together in the context that NJ has some of the highest hosing costs in the nation and they are stuck home with their parents,” said Hughes.

All totaled the states above the national average have 205 electoral votes.

A Crisis in Affordability That Pollsters Are Missing

The delay in household formation among millennials has generational consequences and is playing out in the context of a continuing affordability crisis that the federal poverty data misses, according to John Franklin, CEO of the United Way of Northern New Jersey.

Franklin said what has not been taken into account is that many of the post-Great Recession jobs that have been created come with lower wages, irregular hours and often no benefits.

“What we have learned is that the opportunity for improving your life is very difficult because 52  percent of the population in New Jersey is living on less than $20 bucks an hour income," Franklin told Salon. "And three-quarters of them are living on $15 an hour or less.”

Franklin said the United Way’s research has identified a major percentage of the population, in New Jersey and several other states, whose income may not fall below the poverty line but who never the less struggle paycheck to paycheck. In an effort to put a human face on this stressed cohort the United Way calls these kinds of families ALICE households.

The United Way’s ALICE research incorporates the cost of day care, shelter, taxes, transportation — all the things not captured in much poverty data that varies greatly between different states and even within cities in the same state.

“If you look at Connecticut, for example, the ALICE population is 34 percent below what we call the ALICE threshold but 68 percent in Hartford, 46 percent in state of Florida,” Franklin said. “Brackets change a bit, so what defines  an ALICE threshold in Indiana is not what it is in New Jersey.

Concluded Franklin: "But you still end up with the same phenomenon, which is more than a third of the population is living below what we call the ALICE threshold, which is a very bare-bones budget.”

A Single Mom and the Faded Urgency of Now

Last week Michelle Leonard sat outside her place of employment, a supermarket in New Jersey's Morris County where she works full time. A single mother, 35-year-old Leonard struggles each week to support her 4-year-old, Claudia Rose, and herself on less than $9 an hour. She said she is constantly battling with welfare officials to not penalize her for working, even though she’s just barely making over the minimum wage.

“They will pay for my day care but I just received a letter saying because of how much I make now I now have to pay $18 a week for my day care,” Leonard told Salon. “I no longer get housing because they say I make too much at $8.98 an hour. I don’t know how they figure that but they did.”

Leonard said she doesn’t think news media reports reflect the reality of her day-to-day struggle and as a consequence politicians don’t address it either.

“Most people who report on these things have never lived the life: They don’t know what it is to grow up poor — living paycheck to paycheck,” Leonard said. “They don’t understand what it is to struggle to make ends meet or to make sure that your children are fed while you sit there and starve. Because you can’t afford a meal for two, you would rather your child eat. You can go for days with out eating because of the struggle of the finances. It is so hard.”

Leonard said if she were to be paid $15 an hour — the rate now being touted as a national living wage — her life, and her daughter’s life would be radically transformed.

“If I made $15 an hour, that would pay my rent, provide food in my house for a month and that would give me a little extra money to save in the bank for some type of emergency,” Leonard said. “That’s what $15 an hour would do. It would help me tenfold.”

Millennials at the Crossroads

Historically, younger Americans lag in voter participation, but in 2008 the watershed candidacy of Barack Obama inspired a majority of them to turn out and support him in his presidential bid.

By 2012 the enthusiasm of younger Americans had waned with just 45 percent bothering to vote. The fact they did turn out strongly in Ohio's Cuyahoga County, Philadelphia and Florida's Broward County, however, gave the president his electoral margin of victory.

For contemporary millennials, America is very much a “stucknation” mired in intractable wars overseas and in a model of global trade that puts capital over labor, delivers increasing wealth inequality at home and environmental degradation around the world.

For most of millennials’ adult life, Washington has been mired in a scorched earth battle where the opponents fund themselves by vilifying one another on a daily basis. For America’s boomers, like myself, our memories include moments memorialized by those now faded black-and-white photos of members of both parties flanking President Lyndon Johnson as he signed the 1964 Civil Rights Act.

Today's millennials were not alive for that national can-do moment in 1969 when we all stopped whatever we doing to watch our fellow Americans walk on the moon.

Unfortunately, merely repeating the bromide “make America great again” over and over will not transport us back to the time in the 1950s when the American middle class was thriving. The circumstances that produced those huge gains in household income included a world war and the decimation of rival industrial powers who relied in us to restore them.

We were masters of that universe, but we can’t bring it back.

Millennials know better than most that automation is radically changing the world of work in ways that are already causing major economic dislocation. As polar ice caps melt, and the signs of global warming become increasingly manifest, we have to reframe what we mean by prosperity.

No, this is about imagining an America yet to be.