When Trump wasn't name-calling during the GOP debates, his rhetoric was nonsensical — but difficult to rebut 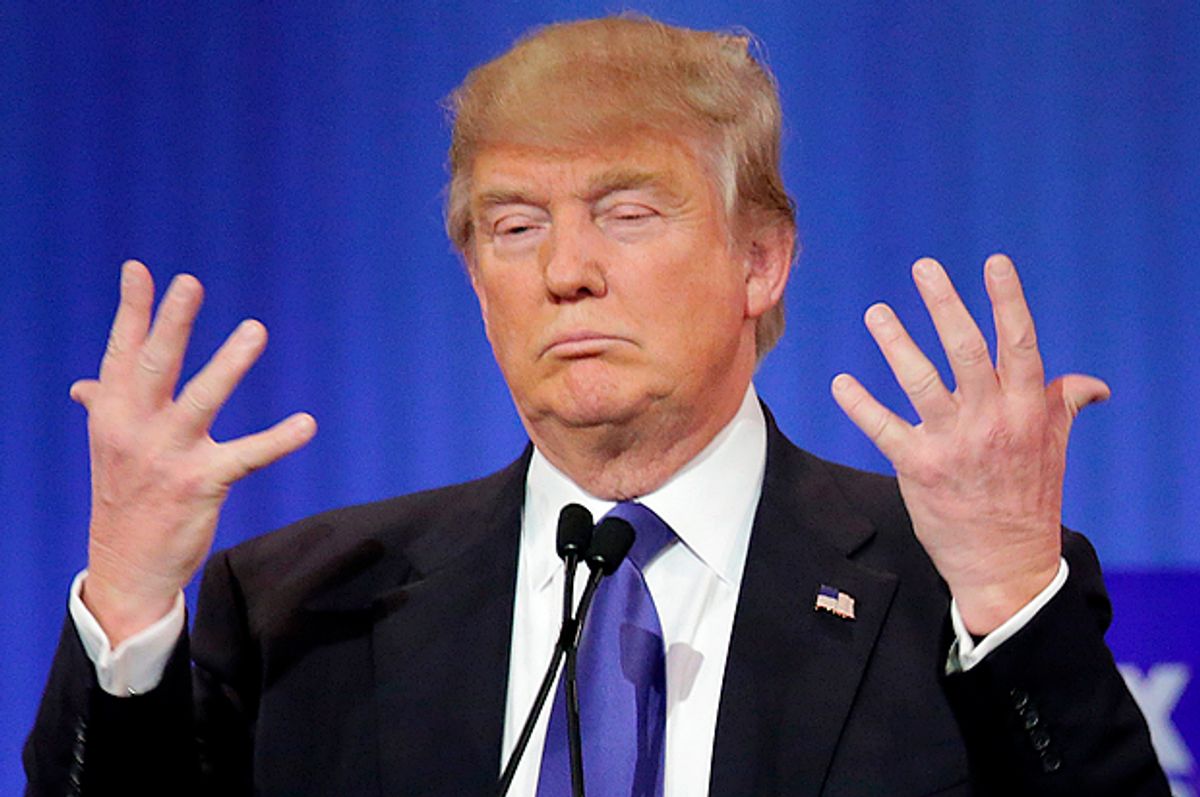 What a long strange trip it's been since I wrote about the first GOP debate in August 2015. The stage was so crowded with Republican all-stars they couldn't fit them on the same stage. The anticipation of seeing amateurs like Dr. Ben Carson and Donald Trump face off with seasoned pols like Gov. Chris Christie and former governor Jeb Bush, and the fringier Sens. Rand Paul and Ted Cruz, was thick enough to cut with a knife.

Trump got off to a great start and set the tone for the rest of the debates when he responded to Fox News' Megyn Kelly quoting him saying women are “fat pigs, dogs, slobs and disgusting animals" by replying, to the great amusement of the crowd, that he had said that only about Rosie O'Donnell. It's doubtful there were more than a handful of people in the country that night who dreamed that a little over a year later he would be standing on the stage facing Hillary Clinton.

There were 12 debates and seven candidate forums during the Republican primaries. Trump participated in all but one of the debates and three of the forums, and he dominated all of them. After Trump was asked a tough question early on about the nuclear triad and looked like a deer caught in headlights, he learned to take advantage of the time constraints by volleying insults and crude zingers to avoid answering difficult questions. He found that he could deflect and distract by being outrageous.

But the final debate between the last four standing, Trump, Cruz,  Sen. Marco Rubio and Gov. John Kasich, was different. It may be the template for what we're going to see tonight. Trump wasn't his usual garrulous self. He was "serious" in that debate, no name-calling, no acting out. And he made absolutely no sense.

Take just this one question as an example:

Moderator: Mr. Trump, you don't want to raise the retirement age, and you also don't want to cut benefits, even for wealthier Americans. But according to the Social Security Administration, unless adjustments are made, Social Security is projected to run out of money within 20 years. So specifically, what would you do to stop that from happening?

Donald Trump: Well, first of all, I want you to understand that the Democrats, and I've watched them very intensely, even though it's a very, very boring thing to watch, that the Democrats are doing nothing with Social Security. They're leaving it the way it is. In fact, they want to increase it. They want to actually give more.

I will do everything within my power not to touch Social Security, to leave it the way it is; to make this country rich again; to bring back our jobs; to get rid of deficits; to get rid of waste, fraud and abuse, which is rampant in this country, rampant, totally rampant.

He babbled on for some time about how he would get rid of deficits and how China is ruining everything and how he will cut all the fat and make America great again. It was a simple bold promise to "fix everything" and voters don't have to worry their pretty little heads about the details.

But you'll notice where he also said, "the Democrats are doing nothing with Social Security. They're leaving it the way it is" and "that is what we're up against" but then immediately said, "I will do everything within my power not to touch Social Security, to leave it the way it is." It's a bizarre, contradictory statement that allows him to have it both ways, to criticize the Democrats while taking exactly the same position.

The confused moderator let that go but followed up with facts and figures suggesting that "waste, fraud and abuse" would only amount to about 2 percent of the money needed. Trump replied that there's plenty of money if we stop being the policeman of the world — and said in the same breath that we must spend whatever it takes to build up our military. He ended with:

If you wrap all that up, what Trump was apparently saying is that we're going to "negotiate deals" to "bring back" wealth and make other countries pay for the massive costs of building up our military, shoring up Social Security and everything else. This is inane twaddle, but it isn't name-calling. He sounded serious.

When Trump's numbers were challenged by Marco Rubio, this was how he responded:

Look, I'm just saying very simply we have a country that I've never seen anything like it. I've been going over budgets and looking at budgets. We don't bid things out. We don't bid out, as an example, the drug industry, pharmaceutical industry. They don't go out to bid. They just pay almost as if you walk into a drugstore. That's what they're paying.

I'm self-funding my campaign. Nobody is going to be taking care of me. I don't want anybody's money. I will tell you something. We're going to go out to bid in virtually every different facet of our government. We're going to save a fortune.

That is nonsense word salad worthy of former vice presidential candidate Sarah Palin. (He's going to "bid out" the pharmaceutical industry? Even in Trump's fantasy universe, what does that mean?) Word salad is very difficult to rebut, particularly if it is delivered with a confident attitude. Sure, it's incoherent gibberish, but because it's all over the place it's difficult to nail down specifically what's wrong with it without getting lost in the weeds. Former secretary of state Hillary Clinton is a skilled and seasoned debater, but she's never dealt with anything like this.

It's possible that Trump will lose his cool on Monday night and demonstrate to the world that he is temperamentally unfit for the presidency. But it's unlikely. He's already proved that he is capable of keeping it together if he has to. What he has not been able to do is demonstrate that he knows what he's talking about. The question is whether a majority of the American people can see that, or perhaps more important, whether they even think that matters.