A memo from hell: Donald Trump says I live there, along with every other black and brown American — but here’s the true hell he'll never understand

Black people and Latinos are "living in hell," Trump says. Time to tell Donald what our lives are really like 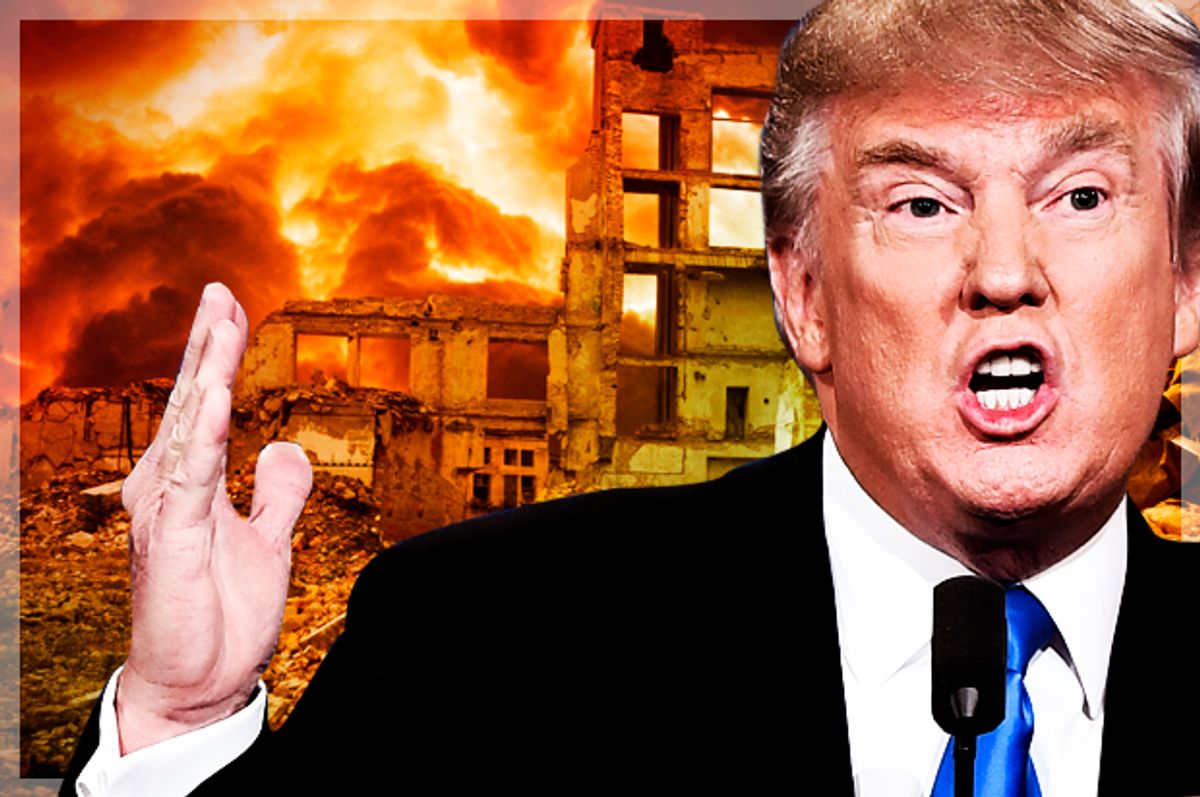 I was one of the millions of people who tuned in to the highly anticipated presidential debate on Monday night — and according to Donald Trump, I live in hell, right next door to the Hispanics. A place where any and every person of color will be shot or will shoot someone.

Trump’s black and Hispanic hell is a dirty, trashy, rat-infested neighborhood full of barefoot, unemployed dark-skinned people who are all high off crack and strapped with state-of-the-art automatic weapons. These are very dark places­ — the darkest of the dark. Sunny days don’t exist. Now, there may be fresh watermelon in Trump’s hell, but there are no schools, no churches, no scholars, no grandmas, no block parties, no cookouts, no dessert, no family structure, no success, no love, no hope.

He’d probably say, “These places are worthless, the best at being worthless! And only I can fix them!” But, of course, he has no real plan. Trump’s black and Latino hell has a 100 percent unemployment rate. Everyone is on welfare and a social fabric or mobility don’t exist. Murder defines the state of these African-American and Hispanic hells: Every community of color is the worst neighborhood in Chicago, a “war zone,” as he called it.

We don’t read books, do yoga or eat salads in Trump’s black and Hispanic hell. Hard work is a myth. These people are lazy and incapable of being educated, innovative or inspiring. Their only talents are frying chicken, rolling burritos and making babies whose lives are financed by the taxes he doesn’t pay.
 
We never started, ran or owned Fortune 500 companies, like Reginald Lewis. Or ran major sports franchises, like Magic Johnson or Bob Johnson. We contributed nothing to art, like Jacob Lawrence or Romare Bearden. Misty Copeland was never born. Charles R. Drew or Vivien Thomas didn’t advance science or medicine. We set zero trends and are not a part of American history or culture because all of us are too busy living in hell.

Contrary to what many people like Trump believe, all black and Latino people don’t live in hell and a few bad news stories can’t define a whole race. Talk to some Morehouse College students about random drive-bys, walk through the offices of Def Jam and 300 Entertainment and ask about welfare handouts, and then finish your trip with the suburban African-Americans of Maryland's Prince George’s County, where the median-family income is roughly $85,000 a year. Maybe they’ll take you to Crate & Barrel.

Trump’s stereotypical black and Latino hell is a world that only exists to people like Trump — and that’s the real hell we’re living in. That’s the hell that Donald doesn’t understand. A place where African-Americans are nothing more than a political idea. A group to be tossed around during election time. An irrelevant box on a Republican political checklist, next to restricting a woman’s right to choose, denying global warming, cutting taxes for the rich and justifying the death penalty. That’s the hell we live in.

Regardless of what African-Americans accomplish in this country, people like Trump and his brain-dead supporters always try to reduce us to gang-banging stereotypes — like Ronald Reagan, who coined the insulting term “welfare queens” for African-American women, when there were (and are) more white people on welfare.

Trump is so profoundly disrespectful and so deeply out of touch that he thinks his hateful synopsis of the entire black community and his stupid church visits will win him African-American support. His comments, his rallies, his staff and his overall pattern of actions clearly shows the level of respect he has for African-American and Hispanic voters — reasons why he’ll never receive anything but the racist vote, which is exactly what he deserves. Because the hardworking black and brown people I know would choose burning in hell over voting for Donald Trump.