Belittling and "braggadocious": Donald Trump was Donald Trump — the only surprise is that anyone is surprised 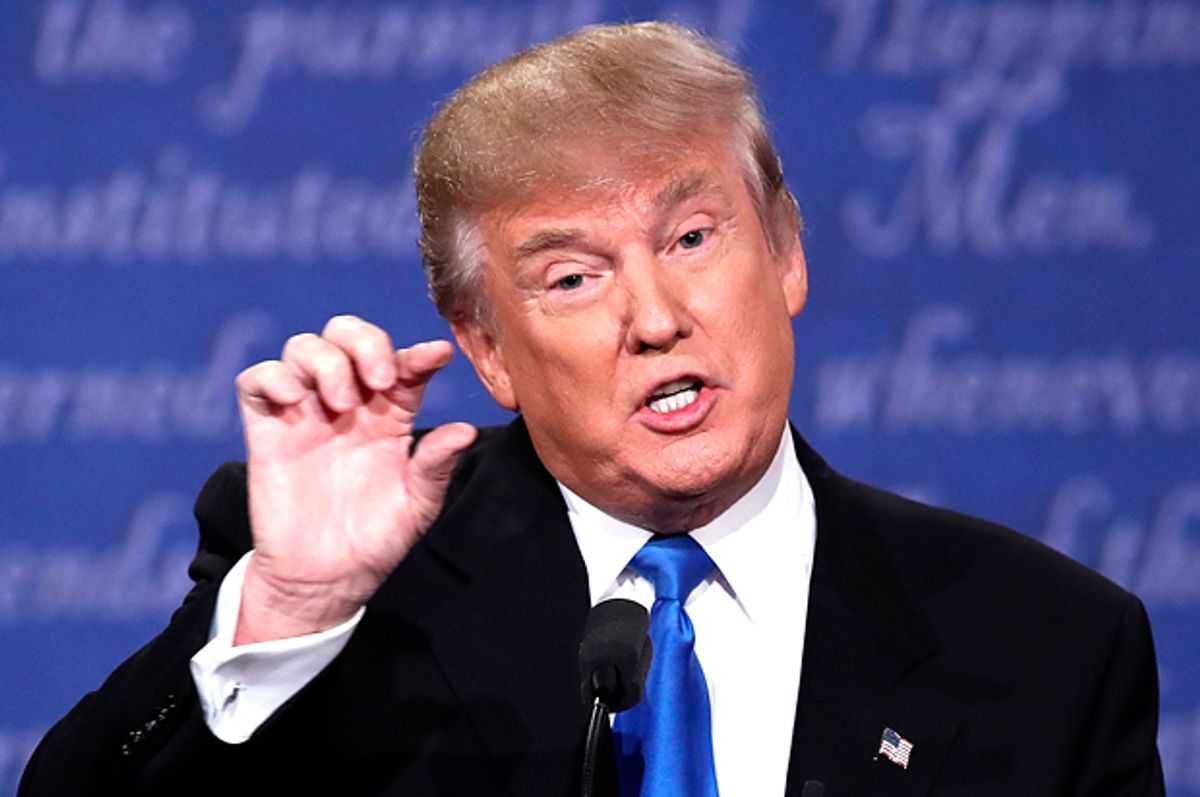 About 15 minutes before the debate began on Monday night, Newt Gingrich tweeted out a very accurate summation of the low expectations that Republican presidential nominee Donald Trump was going to have to hurdle to “win” the evening’s festivities.

Trump “will pass the test of being adequately competent and will get a big boost in acceptability,” Gingrich announced. Adequately competent! Was the former House speaker being sincere or snarky? Or is he still wounded because Trump passed him over for vice president and engaging in a little passive-aggressive behavior like a man stuck in a loveless marriage?

In any case, Trump failed to even clear the low bar of adequate competence that Gingrich set for him. He failed to pass the simplest of tests — stringing together coherent thoughts that more optimistic observers hoped he could get over. He was rude and pugnacious and so dishonest that he had George Washington spinning in his grave at 1,000 revolutions per minute.

In other words, Trump was everything he has been for the past 15 months. The only surprise is that there might be someone in America who is surprised.

It is not just that Donald Trump is incapable of even taking what little he knows about any subject and adding to it, filling out his knowledge base with facts that he can weave into a narrative. We already knew that. But as last night's debate made clear, he is also not even capable of restating old positions so they sound new in a way that discombobulates his opponent when said opponent is more competent than the rogue’s gallery of morons he faced in the primary.

So Trump’s team was stuck trying to cram his same old stump speech lines into tiny, two-minute bites. Early on, he recited these soundbites with all the enthusiasm of a 12-year-old practicing his Torah portion for the thousandth day in a row. Trump’s great strength as a candidate — the practice that made him a hit with the GOP’s rabid and angry base — is his ability to freestyle in front of an audience. He chases after an idea, hits a bump in his train of thought and veers off in another direction, careening from one theme to the next like a smooth silver ball bouncing off the bumpers of a pinball machine.

With these thoughts sanded and shaped and forced to fit into a finite window, Trump sounded off his game. And once Clinton took her first opportunity to jam a couple of white-hot needles into his orange skin, he abandoned all pretense of being even minimally prepared. He became belligerent, in a most braggadocious way. He interrupted the Democratic candidate dozens upon dozens of time, making himself look like an internet troll who has wandered into an intellectual cul-de-sac and can’t find a way out except through sheer force of his bullying.

That was when the debate became a tour through the fever swamps of nearly every right-wing trope and personal grievance that Trump has publicly nursed on the trail for the last year. He snarked at President Barack Obama for playing a lot of golf. He claimed America’s inner cities have become literal war zones.

He said that New York’s old stop-and-frisk policy had not ended because courts had found it unconstitutional but because the legal case against it had landed in front of a judge who was “a very against-police judge,” a dog whistle to conservatives who blame all of society’s ills on the soft-hearted liberal squishes who preside over the nation’s courtrooms. Corrected on the legal history of stop-and-frisk policy by moderator Lester Holt, Trump still refused to believe it. Not believing clearly correct information was a theme for him throughout the evening.

Trump even congratulated himself for being mean to Rosie O’Donnell. About the only right-wing trope he didn’t bring up was Benghazi, but maybe he’s saving it for the second debate.

For her part, Hillary Clinton did fine. She seemed a little halting sometimes as she tried to tie disparate policy points into a story for the audience, but she has never been a gifted orator. Over 90 minutes, she alternated between smiling and looking unflappable, shooting Trump the same bored glance she kept fixing on Republicans at last year’s 11-hour congressional Benghazi hearing. She reminded everyone just how much time she has spent in the arena of high-level politics, in the rarefied air where world-changing decisions are made — whereas Trump seemed confused about aspects of American diplomacy like honoring treaties. No biggie!

Not that any of this is likely to make a difference in the polls. Why would it? Trump is an obvious charlatan, but he has gotten this far partly because a badly polarized electorate means he could count on 40 million or so votes from the moment he won the nomination. That is one reason this thing has remained close, and will stay that way for six more weeks.

It is frightening to realize a man so obviously unfit for the most powerful office on the planet can do so little to hurt his chances. But if there was anything Trump could have done tonight to help himself, he failed. Luckily for us, there is no reason to believe he’ll learn from this.