Donald Trump may love stop-and-frisk — but it was unconstitutional, racist and ineffective

"No one misses the days of stop-and-frisk in New York," says Center for Constitutional Rights that led legal fight 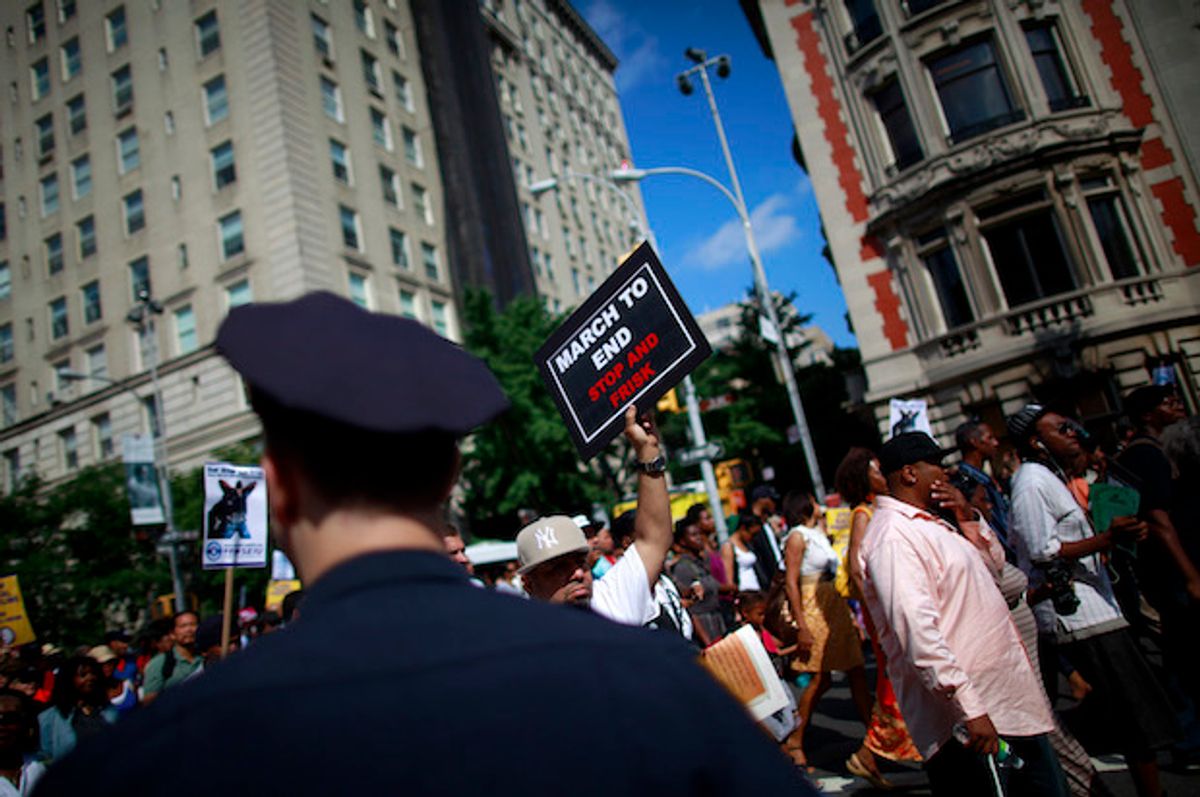 Demonstrators march in a protest against stop-and-frisk in New York City on June 17, 2012 (Reuters/Eric Thayer)
--

A legal group that fought the landmark civil-rights case in which the New York Police Department’s stop-and-frisk policies were found to be racially discriminatory and unconstitutional is once again emphasizing that the program was a failure.

In the presidential debate on Monday night, Republican nominee Donald Trump claimed that stop-and-frisk policies "worked very well." He insisted they "brought the crime rate way down" and called for such programs to be implemented in cities like Chicago.

Trump's assertions fly in the face of facts, however. The Center for Constitutional Rights, a nonprofit legal advocacy group, released a statement on Tuesday morning stressing that the stop-and-frisk policies had been a disaster.

In 2013, a federal court found that the NYPD's harsh stop-and-frisk policing was unconstitutional and racially discriminatory in a case brought by the Center for Constitutional Rights known as Floyd v. City of New York.

"Stop and frisk has long alienated the city’s black and Latino communities — who continue to this day to be disproportionately targeted, even with lower rates of stops overall — and contributed heavily to their sense of being under siege and their distrust of the police," the legal group said in a statement. "No one argues these facts."

Darius Charney, the Center for Constitutional Rights' lead attorney in Floyd v. City of New York, told Salon that even putting aside the discriminatory nature of the program, there is still no evidence that it was effective.

"There has yet to be a credible criminological study demonstrating that stop-and-frisk, as practiced by the NYPD, contributed in any meaningful way to the crime rate decline in NYC over the past two decades," Charney said.

"Moreover, as we have seen over the past four years, the number of stops conducted by the NYPD has drastically declined while crime has continued to fall," he added.

Falling crime rates in New York City have corresponded with a drop in crime throughout the country, even in cities without stop-and-frisk programs.

Supporters of the program have warned that abandoning it would lead to a rise in crime, the Center for Constitutional Rights noted, but the facts show the opposite has happened.

In 2011, when New York City's stop-and-frisk program was at its peak, there were 515 murders. In 2015, after the program had been found unconstitutional, the number of murders decreased to 356.

"The vast majority of those stopped did nothing wrong, received no summons, were not arrested or found with contraband," the Center for Constitutional Rights' statement explained. Police were operating based on racial profiling not probable cause or reasonable suspicion.

A staggering 83 percent of the people stopped were black or Latino. Yet blacks and Latinos make up just over half of New York City's population.

The Center for Constitutional Rights pointed out in 2012 that confiscation of guns resulted from only 0.15 percent of stops — a rate that would have been roughly the same for stops at a random checkpoint.

"By 2013, the NYPD’s stop-and-frisk program had so alienated New Yorkers of all races that clear majorities of them said, both in polling on the issue and at the voting booth during the mayoral election, that the program was illegal, racially discriminatory, and needed to be drastically changed," attorney Charney told Salon.

Federal Judge Shira Scheindlin ruled in Floyd v. City of New York that the city's "highest officials have turned a blind eye to the evidence that officers are conducting stops in a racially discriminatory manner." She added, "In their zeal to defend a policy that they believe to be effective, they have willfully ignored overwhelming proof that the policy of singling out 'the right people' is racially discriminatory and therefore violates the United States Constitution."

After the ruling, the New York Times editorial board called the practice of stop and frisk a "corrosive and socially damaging program."

"The evidence clearly showed that the police carried out more stops on black and Hispanic residents even when other relevant factors were controlled for, and officers were more likely to use force against minority residents even though stops of minorities were less likely to result in weapons seizures than stops of whites," the Times editorial board wrote.

The Center for Constitutional Rights noted that the NYPD is now undertaking a variety of court-ordered reforms.

"No one misses the days of stop-and-frisk in New York," the legal group stressed. "It is not a policy that should be expanded in any other city."

In its statement, the Center for Constitutional Rights also said the "black men and women killed by police again and again, from Ferguson to Charlotte are victims of the very same systemic racial bias" seen in stop-and-frisk policies.

The Center for Constitutional Rights has a long history of pushing back against this type of systemic racism. It was founded in 1966 by attorneys who fought on behalf of the civil rights movement in the South.

Charney elaborated, "Stop-and-frisk, as practiced by the NYPD up until 2014, was at its root about equating blackness with criminality and dangerousness, which is exactly the same kind of thinking that has led to all of the horrific and avoidable police shootings of people of color that have captured the nation’s attention over the past few years."