In the fight of his life, Donald Trump was brought down by his basket of deplorables as much as Hillary Clinton 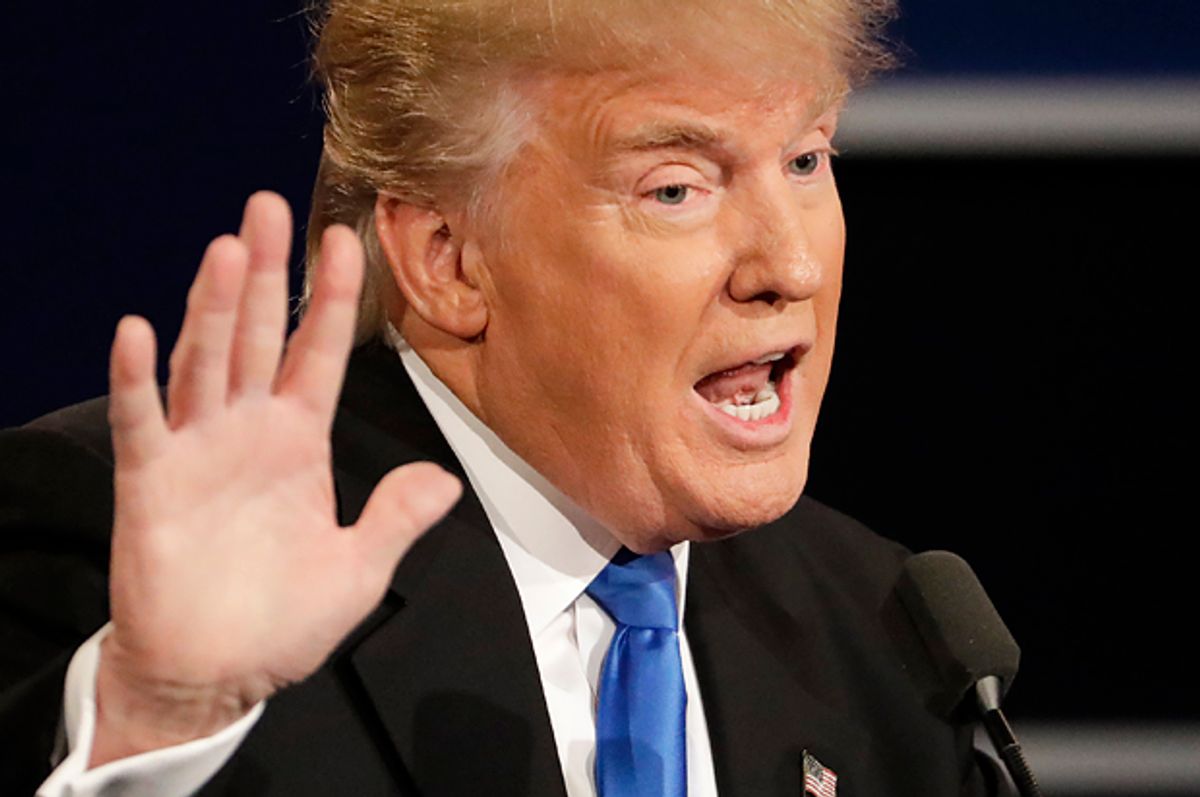 Watched by more than 80 million people, last night’s first presidential debate between Hillary Clinton and Donald Trump had the feel of a heavyweight title fight. Donald Trump the boisterous, blustery, mean, undisciplined, heavy-hitting and much-hyped brawler has destroyed all his previous foes.

He is a bully who embraces his role as a destroyer of men. Across from him stood Clinton, an uninspiring, uninteresting and yet undeniably talented pugilist. Trump is a political bar fighter. Clinton is the measured political technician. Styles make fights.

The introductions would be made and the bell would ring. Trump threw haymakers and huge lazy punches. Clinton dodged and counterpunched. Trump became frustrated and angry. He desperately clinched. Clinton toyed with him. Trump looked to Lester Holt, the referee, for help. Little assistance would be forthcoming. Trump became increasingly flustered and angry that Clinton would not do him the kind favor of allowing herself to be hit.

Clinton would score punch after punch on the flummoxed Trump. She smiled and grinned. He sniffled; his skin possessed an unhealthy pallor. At a certain point in the 90-minute bout one could almost hear Howard Cosell bellowing from another time, not about Smokin' Joe Frazier but the Donald: “Down goes Trump! Down goes Trump!”

Watching Trump stammer and in a discombobulated state, I was reminded of the following passage in Richard Hoffer’s great book “Bouts of Mania: Ali, Frazier, and Foreman — and an America on the Ropes”:

There were two more knockdowns — six in all — before the fight was finally called at 1:35 of the second round. None of the knockdowns was conclusive in itself; none showed the neural disconnect, a man going suddenly vacant, as if a switch had been flipped. But each showed a steady degradation of the nervous system, Frazier in less and less control of his body, his legs almost palsied, wobbling, as he attempted to keep his ground, assault after assault. Knockdown by knockdown, he was being reduced from heavyweight champion to a clumsy and helpless husk. It is a sad corollary. A fallen fighter is not simply defeated; he must look ridiculous as well. "A pitiful sight," the local paper proclaimed. It was only after the sixth that Foreman, forever wary of Frazier, a kind of undead the way he kept getting up, allowed himself to believe he'd won. It was only after the sixth that Mercante stopped it.

Lester Holt did not possess the authority to stop Clinton from thrashing Trump. Nor did Trump have a corner man to throw in the towel. Neither Gennifer Flowers nor Corey Lewandowski would be so kind as to volunteer themselves as human shields for Trump’s benefit.

Trump would be defeated, and the end of the contest was a merciful thing that stopped the bloody beating.

I predicted that Donald Trump would defeat Hillary Clinton in their first presidential debate. I am so very glad that I was wrong.

I suggested that in order to defeat Trump, Clinton must undermine his ego, encourage his overreacting and ignore his bullying and brawling style. Clinton would also have to use the facts to repeatedly expose Trump as a liar. Clinton could also easily bait Trump because of his insecurities about women and his own masculinity. She did all of these things exceptionally well.

Clinton’s performance was not perfect. (She missed opportunities to highlight how his comments about being “smart” for not paying taxes imply that “regular Americans” are stupid or “losers.” Likewise, when Trump said Obama is “your president,” she could have countered with, “no, he is our president.”)

But overall, Clinton’s performance was still devastating. What should be terrifying for Donald Trump and his minions is that Clinton, having now tested him, will be even more dangerous and effective in the future.

Several weeks ago, Clinton signaled to one of Donald Trump’s greatest weaknesses — which she exploited to full effect Monday night.

During a fundraising dinner Hillary Clinton described Donald Trump’s racist, prejudiced, bigoted, white supremacist, misogynist, nativist and sexist supporters as a “basket of deplorables.” The American corporate news media and many pundits were stunned that a presidential candidate would describe millions of voters in such stark terms.

In reality, Clinton was quite kind and modest in her description of Trump’s supporters as human deplorables. Public opinion polls and other data show that Trump voters — and Republicans en masse — are authoritarian, motivated by overt racism and anti-black animus, believe that President Barack Obama is illegitimate because he is a secret “Muslim” who is not really an American citizen, and possess other noxious beliefs that are antithetical to a cosmopolitan, inclusive and forward-thinking democracy.

In all, to support Trump is to support racism, nativism, white supremacy and sexism. To describe only half of Trump’s supporters as a “basket of deplorables” is in many ways too kind and undercounts the number of white voters who are infected with his politically necrotic ugliness.

This was repeatedly shown during Monday night’s presidential debate. When asked about his racist birtherism campaign and how it was disrespectful to both Obama and the African-American community, Trump declined to apologize for his behavior. When asked about the racist police state and new age black codes he wanted to institute across the United States against African-American and Hispanic “inner city” communities, Trump doubled down on his plans.

Unmoved by how “stop and frisk” and other hyper-aggressive policing policies are racially discriminatory and have done little if anything to reduce urban street crime, Trump insisted — contrary to the facts — that such programs are effective and are acts of love and concern for black and brown Americans.

Trump is a racial fascist, who when asked about African-Americans, continued to insist that their lives are a living hell because of Obama and the Democrats. Trump continued his white supremacist fever dreams with claims that mobs of “illegal” immigrants from Latin America roam the streets, raping white women, killing at will and generally running amok. Trump would crescendo during the debate with a healthy dose of sexism and misogyny where he would not apologize for calling women he disapproved of “pigs, slobs, and dogs.”

These claims and behavior are highly disliked by a majority of American voters: In a recent Post/ABC poll, 60 percent of respondents described Trump as “biased against women and minorities.” Trump’s sexism and racism are also hurting his support among white college-educated men, as well as women more generally — groups he needs more support from if he is to defeat Clinton in November.

While some have joked that Trump’s chronic sniffling during the debate was a sign that he was on cocaine, it is much more likely Trump is just addicted to the political meth of the world inhabited by the white supremacists, white nationalists and right-wing news entertainment disinformation machine to which he is beholden.

Although he was defeated during the first debate, Trump is still the biggest villain in American politics. As he is already doing today, Trump will, in keeping with that role, claim that he was treated unfairly, the game was “rigged” against him and that a conspiracy is afoot.

Trump is also an avatar and stand-in for the many millions of angry and alienated white voters who gifted him with the Republican presidential nomination. Trump’s humiliation is their humiliation, which ironically may increase their sense of attachment to him.

The Republican presidential nominee is a fascist who leads a racist and sexist political movement. He was defeated in a debate by a woman. The debate was also moderated by a black man. This is a potentially explosive combination for the toxic masculinity and white victimology politics that drive Trump and the Republican Party. To that end, Trump will mine the optics of gender and race for maximum effect.

There does remain one fixed and certain fact. Donald Trump is a villain. And villains do not lose nicely or politely. The rampage will now begin.