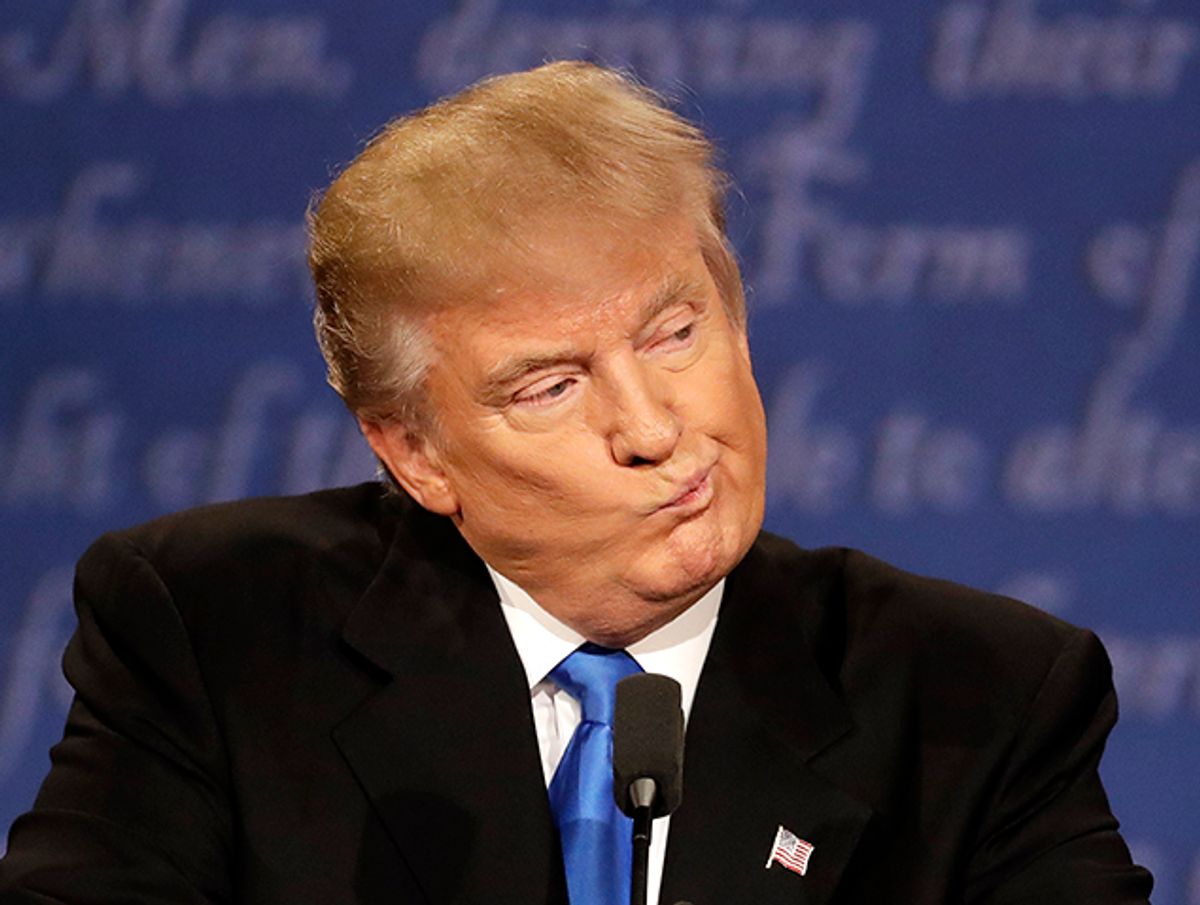 If Donald Trump's attempt to play "I'm rubber and you're glue" with rival Hillary Clinton over the question of temperament came as a jarring shock to your ears during the first general election debate, you are not alone. The Republican presidential nominee's claim that he has "much better temperament" than the former secretary of state was the top social moment on Facebook and Twitter on Monday night, according to the social-media outlets.

"I have much better judgment than she does. There's no question about that," Trump said as Clinton stood smiling on the Hofstra University debate stage.

As the audience broke out in audible laughter, Trump powered through his attempt to associate the Democratic presidential nominee with one his greatest vulnerabilities by embracing it as an advantage for himself.

A recent New York Times/CBS News poll found that 55 percent of voters believe Clinton has “the right kind of temperament and personality to be a good president,” while only 31 percent said Trump did.

A pro-Clinton super PAC picked up on the discrepancy between Trump's claim and the apparent public perception. Priorities USA released the first post-debate ad Tuesday morning skewering Trump's claims on temperament by simply airing footage of some of his most absurd statements.

“I would like to punch him in the face, I’ll tell ya,” Trump said in the ad, criticizing a protestor earlier this year.

“I would bomb the shit out of them,” he says in another clip of footage, referring to his plan to handle terrorism in the Middle East.

“I could stand in the middle of Fifth Avenue and shoot somebody and I wouldn’t lose any voters. OK?” Trump finally says to the conclude the ad, before a black slate appears with the warning: "Donald Trump, Unfit To Be President"

Following the lead of the super PAC first established to boost his re-election efforts, President Obama appeared on Ryan Seacrest's morning show on Tuesday and said that Trump's debate performance showed that he "doesn't have the preparation, the temperament or the core values of inclusion and making everybody have opportunity that would take our country forward."

While Trump's latest absurd claim may have drawn newfound attention, it's actually an old line he's been testing on the campaign trail for some time.

"I think my single-greatest asset of any assets I have is my temperament, and I know how to win," Trump said at a North Carolina rally earlier this month. He repeated the line during an interview with ABC News that same day.

"A lot of people have said that that know me that maybe my greatest strength is my temperament," Trump told Fox News in August.

Even in the Feb. 6 GOP primary debate, Trump claimed, "I actually think I have the best temperament."