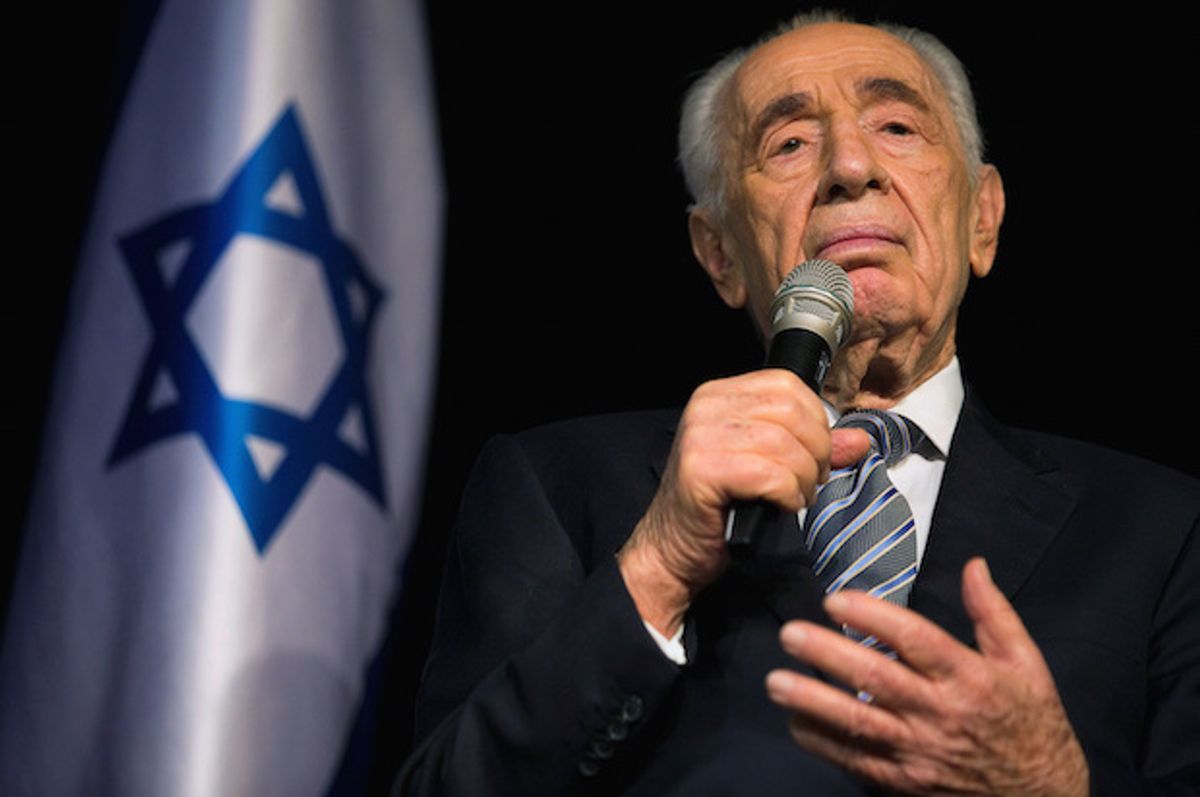 Israel's President Shimon Peres speaks to the media during a news conference in the southern town of Sderot on July 6, 2014 (Reuters/Amir Cohen)
--

Peres has long been showered with adulation as a "man of peace." ABC, Deutsche Welle, Ynet and more used this moniker in the headlines of their reports on his passing. Fox News called him a "peace pioneer." The Washington Post dubbed him "the Israeli patriot who believed in peace."

What few media reports have acknowledged is that there was considerable blood on the hands of this man of peace — Palestinian and Lebanese blood, to be more precise.

The Times of Israel encapsulated the late leader's contradictory legacy somewhat better with the headline "Peres, a man of peace, made Israel a military powerhouse." The New York Times likewise went with "Shimon Peres Dies at 93; Built Up Israel's Defense and Sought Peace." And CNN described him as "Israel's warrior for peace," as did Secretary of State John Kerry.

These kinds of Orwellian descriptions are common in media reports on the Israeli-Palestinian conflict. Even when Israeli politicians carry out brutal wars and oversee atrocities, it is always in the name of peace, we are told. Conversely, when Palestinians resist Israeli military occupation and land theft, their response is generally depicted as violent aggression.

The real Shimon Peres, as prime minister, oversaw a bloody assault on Lebanon in 1996, including a massacre of more than 100 civilians in an attack on a U.N. compound. He was also a staunch defender of the expansion of illegal Israeli settlements on occupied Palestinian land and the Israeli blockade of Gaza.

Peres, who participated in the war that established Israel by violently expelling and displacing the majority of the indigenous Palestinian population in 1948, later tried to erase this history. The ostensible man of peace told the Israeli newspaper Maariv in 2013 that before Israel was created, "There was nothing here."

The New York Times stressed in the opening paragraph of its obituary that Peres "did more than anyone to build up his country’s formidable military might." This is the kind of belligerent so-called peacemaking that is often rewarded with the Nobel Peace Prize (founded, after all, by Alfred Nobel, the inventor of dynamite).

Peres, the Nobel laureate, played a key role in obtaining nuclear weapons for Israel. Top-secret government minutes from 1975 meetings show that Peres, who was then defense minister, offered to sell nuclear weapons to the apartheid regime in South Africa. (Like the U.S., Israel was a semi-covert ally of apartheid South Africa.)

Joining Peres as Nobel Peace laureates are accused war criminal Henry Kissinger — whose policies directly or indirectly caused millions of deaths — and current U.S. President Barack Obama — who dropped more than 23,000 bombs on six Muslim-majority countries in 2015 and has since launched a new war in a seventh, that being Libya. They epitomize what scholar Michael Parenti has sardonically called the "Nobel Peace Prize for War."

An omnipresent figure in Israeli politics, Peres served as both prime minister and president and was a part of a dozen cabinets. Journalist Ben White has documented how Peres played "a key role in the military regime imposed on Palestinian citizens" and the mass land theft and displacement of indigenous Arabs.

What is perhaps Peres' most celebrated contribution, the Oslo accords, is similarly compromised. Peres served as Israel's foreign minister when the agreements were reached in 1993 and 1995. In 2006, however, former Israeli Foreign Minister Shlomo Ben-Ami admitted that Yitzhak Rabin, Israel's prime minister when the Oslo accords were signed, had never thought the Oslo process would "end in a full-fledged Palestinian state."

Ben-Ami noted that the agreement "didn’t even mention the right of self-determination for the Palestinians" or "mention the need of the Israelis to put an end to settlements." He called Oslo "an exercise in make-believe" that would result in what Rabin called "a state-minus."

Rashid Khalidi, a renowned expert on the Israeli-Palestinian conflict and professor of history at Columbia University, has similarly argued that Oslo "was not a deal" and "not a structure that was designed to lead to a resolution of the conflict." He described U.S. policy vis-à-vis Israel and Palestinian as "conflict maintenance" and "a grotesque, Orwellian process."

The Oslo accords maintained the Israeli military occupation in the majority of the West Bank. Oslo II only gave the Palestinian Authority control over a small percentage of the land, in what was designated Area A. As of 2013, Palestinians formally control only 18 percent of the West Bank. Meanwhile, the Israeli military jointly controls Area B, 22 percent of the land, and fully controls Area C, the remaining 60 percent.

Even then, these are formalities. The reality on the ground is worse. A 2001 tape of Benjamin Netanyahu, the current Israeli prime minister, speaking privately to a group in an illegal West Bank settlement was leaked in 2010. In the video, Netanyahu boasted, “I de facto put an end to the Oslo accords."

Netanyahu, now Israel's longest-serving prime minister, also added that the only way to deal with the Palestinians is to “beat them up, not once but repeatedly, beat them up so it hurts so badly, until it’s unbearable."

Peres' rhetoric may have been much kinder than Netanyahu's, but he, too, helped beat up the Palestinians.

While the Oslo failure may be Peres' biggest contribution, the biggest stain on his purported legacy of peace is Operation Grapes of Wrath — the name Israel gave its 1996 war on Lebanon. From April 11 to April 27 that year, under the leadership of then prime minister Peres, the Israeli military launched 600 air raids and fired about 25,000 shells into Lebanese territory. Israel killed 154 civilians and injured 351 more, according to Human Rights Watch.

During the two-week war, Lebanese guerrillas fired 639 rockets into Israel and did not kill a single Israeli civilian. Just three Israeli civilians were injured in the conflict. This stark imbalance in casualties has characterized Israeli wars ever since.

Israel's goal in the attack was, as the human rights group put it, "to effect a massive displacement of the civilian population in south Lebanon," in order to pressure the Lebanese government to disarm guerrilla forces fighting the Israeli occupation of south Lebanon.

About 400,000 Lebanese civilians were forced to flee their homes in the war. Roughly 800 civilians sought refuge in the U.N. compound in the southern Lebanese village of Qana because Israel was bombing their homes. "Most of the civilians at the U.N. compound were women, children and elderly people who were too poor or otherwise unable to get transportation out of the areas of shelling," the Center for Constitutional Rights noted in a fact sheet.

In one day alone, more than 100 Lebanese civilians were killed in an Israeli attack on a U.N. compound. Nearly half the victims were children, and U.N. personnel were wounded. The incident is now known as the Qana massacre.

"It was a massacre. Not since Sabra and Chatila had I seen the innocent slaughtered like this," Fisk wrote. "The Lebanese refugee women and children and men lay in heaps, their hands or arms or legs missing, beheaded or disemboweled. There were well over a hundred of them. A baby lay without a head. The Israeli shells had scythed through them as they lay in the United Nations shelter, believing that they were safe under the world's protection."

He continued, "In the remains of a burning building — the conference room of the Fijian U.N. headquarters — a pile of corpses was burning. The roof had crashed in flames onto their bodies, cremating them in front of my eyes. When I walked towards them, I slipped on a human hand."

"The blood of all the refugees ran quite literally in streams from the shell-smashed U.N. compound," he added.

A survivor told Fisk at the time, "The Israelis know we're here. This has been a U.N. battalion headquarters for 18 years." Fisk noted that the U.N. compound was very clearly marked and added, "Not a soul in southern Lebanon is ignorant of their location."

The Israel Defense Forces did not warn the U.N. before attacking the compound. The U.N. harshly condemned the attack and did not accept Israel's claim that it was an accident.

"It is unlikely that the shelling of the United Nations compound was the result of gross technical and/or procedural errors," the U.N. said. Its investigation found many of the Israeli government's claims about the attack to be false.

Peres launched the war just before the Israeli election. Many observers took it as a sign that he was playing tough to earn more votes.

After the Qana massacre, prime minister Peres claimed Israel did not know several hundred civilians had been seeking refuge at the compound. Fisk says that is a blatant lie. The U.N. had repeatedly warned Israel before the attack, and Fisk revealed that Israel had even flown a surveillance drone over the camp during the massacre.

Fighters from the Lebanon-based guerrilla group Hezbollah had allegedly fired missiles from near the U.N. compound before the massacre. Israel used this to justify the attack. Hezbollah has its origins in the guerrilla groups combating Israel's military occupation of Lebanon. Israel briefly invaded and occupied south Lebanon in 1978, before it was pressured to withdraw. Israel then invaded the rest of the country in 1982, reaching as far as Beirut. Its goal was to force the Palestine Liberation Organization out of Lebanon. Since the creation of Israel in 1948, many thousands of Palestinians had been expelled by Israel to Lebanon and the country was a hub for Palestinian armed groups.

From 1982 on, Israel militarily occupied south Lebanon. Israeli troops remained in the country until 2000. When the U.N. had pressured Israel to withdraw after its 1978 invasion, it created the U.N. Interim Force in Lebanon, known by the acronym UNIFIL. These peacekeeping forces were housed at the U.N. compound in Qana. It was these U.N. forces, many of whom were Fijian, that were attacked by the Israeli military in April 1996.

"Israel's slaughter of civilians in this terrible 10-day offensive," Fisk wrote at the time, "has been so cavalier, so ferocious, that not a Lebanese will forgive this massacre."

An Israeli magazine later published an interview with a military officer who called the victims “just a bunch of Arabs,” adding, “A few Arabs die, there is no harm in that.”

Rights groups accused Israel of a slew of violations of international humanitarian law in the 1996 war. Human Rights Watch said the IDF carried out "indiscriminate and unlawful attacks on community-based medical services"; "indiscriminate attacks on the vehicles of U.N. peacekeepers, which were part of a pattern during Operation Grapes of Wrath of Israel's attempt to impede U.N. peacekeepers' delivery of humanitarian assistance to civilians who were unable or unwilling to leave their homes"; and "artillery attacks near and on U.N. bases where civilians were openly sheltered, and the use during such attacks of anti-personnel shells designed to explode above the ground and spread shrapnel over a wide area in order to maximize casualties."

Human Rights Watch said the Qana massacre "was not unique in its general features," noting that "the Israeli military on previous occasions had violated the laws of war by not taking precautions to spare Lebanese civilians from death and injury prior to launching attacks, and indeed by showing an appalling willingness to conduct military operations in which civilians would bear the brunt of the suffering."

Immediately after Peres' death, Fisk published another piece reflecting on his legacy, "Shimon Peres was no peacemaker. I’ll never forget the sight of pouring blood and burning bodies at Qana."

"When the world heard that Shimon Peres had died, it shouted 'Peacemaker!'" Fisk wrote. "But when I heard that Peres was dead, I thought of blood and fire and slaughter. I saw the results: babies torn apart, shrieking refugees, smoldering bodies."