Just as you suspected all along: Firing middle managers is good for business

New research shows the the bloated ranks of supervisors, administrators and managers add little beside cost 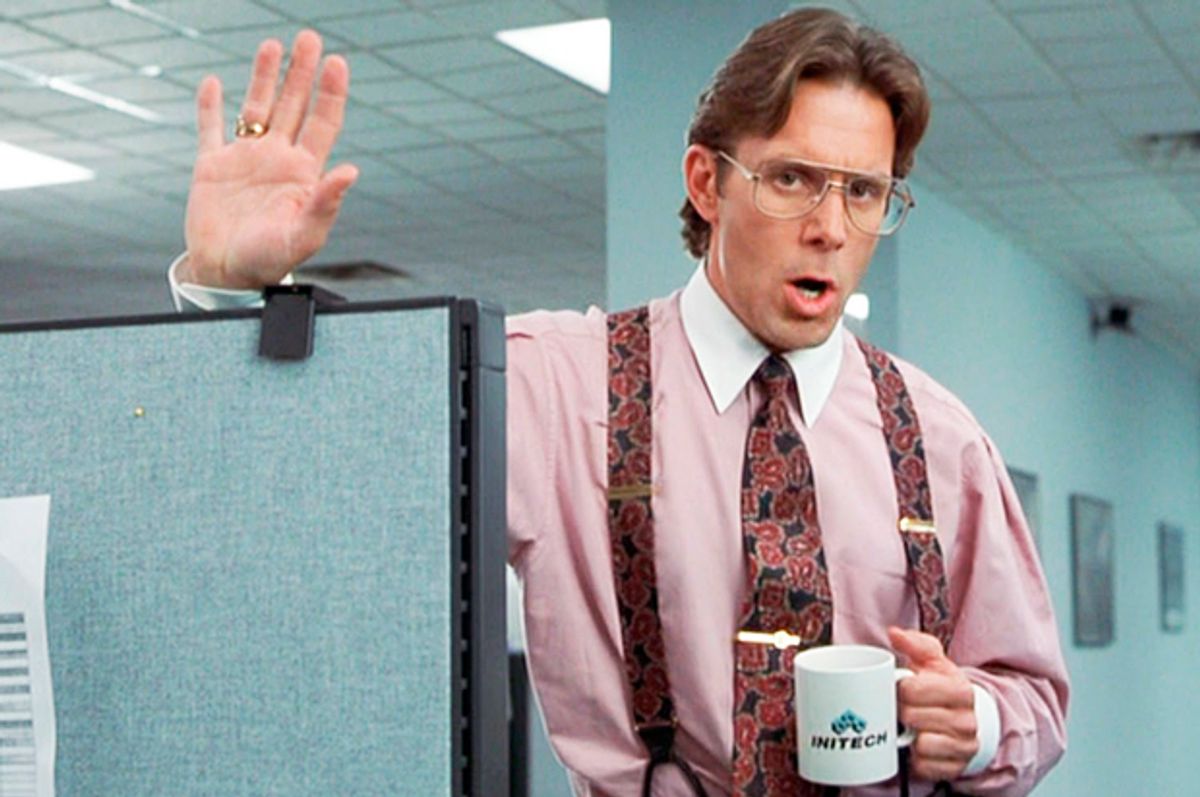 If you’ve spent any time working on the bottom rungs of the corporate ladder, you’ve probably wondered exactly what your better-paid supervisor does. It turns out the answer is just what you learned from "Office Space": Middle managers do a whole lot of nothing.

Today nearly 1 in 5 employees in the United States are tasked with overseeing the producers in a company — representing a ratio that’s at a historic high, according to a recent Harvard Business Review article. The layer of managers and administrators wedged between C-suite executives and rank-and-file employees is so thick yet ineffectual that if you removed most of them, according to the authors Gary Hamel and Michele Zanini, it would have no measurable impact on a company’s output and it could actually improve workplace culture.

The number of company overseers, reviewers and approvers – in charge of everything from tracking employee output to filling out human resources documents – has doubled since the early 1980s. By comparison, the number of other types of positions in America has grown by 40 percent, according to an analysis of U.S. Bureau of Economic data by Hamel and Zanini, who are management consultants.

These two anti-bureaucracy crusaders found that America’s workplaces have one manager or administrator for every four to five employees. It’s fair to say then, extrapolating from their report, that these 21 million middle managers are so underutilized, they would literally be more productive cleaning the restrooms. Plus, these managers, supervisors and administrators take home about 30 percent of the nation’s total compensation.

According to Hamel and Zanini, redeploying these supervisory workers in jobs as productive as the ones performed by their subordinates would boost the national gross domestic product by $3 trillion, amounting to an increase in value to the economy of $141,000 per employee.

Productivity in the U.S. workforce, or the amount of goods and services that workers produce  over a specific period of time, has been climbing in recent decades — especially among nonsupervisory employees. From 1973 to 2014, nonsupervisory employees have become over 70 percent more productive, according to research released last year by the Economic Policy Institute. (This research doesn’t take into account that U.S. worker productivity slowed down in the first half of this year.) While some of this long-term upsurge in productivity can be attributed to technological advances, like desktop publishing and automation, lower-tier U.S. employees have also been pushed to work longer hours than ever before, often without overtime compensation.

Hamel, a London Business School professor and founder of the business-innovation think tank Management Lab in Woodside, California, and Zanini, the co-founder of Boston-based Management Innovation eXchange, are challenging employers to change the way they structure their staffs. The two researchers point to examples of companies that have pared back their bureaucracies to positive effect. Among them is Nucor, a North Carolina steel producer that is run with one manager for every 10 employees.

“Nucor’s revenue per employee is nearly twice that of similarly sized U.S. Steel and nearly three times that of ArcelorMittal, the world’s largest steel producer,” the authors wrote in another Harvard Business Review article in July.

Other companies that greatly reduced the number of managers include Delaware-based W.L. Gore & Associates, producer of fluoropolymer-based Gore-Tex fabrics; California’s Morning Star, one of the world’s top tomato growers; and Washington-based computer-game developer Valve. They have done so by empowering employees working in teams that can make smarter decisions faster than an organization built on a pyramid of hierarchy.

In 2013, Roger Perlmutter, the president of Merck Research Laboratories, noted that the best way for drug companies to reduce their soaring coasts was to “scrape off the top five levels of management, including myself.”

Companies have been great at getting the most out of their employees, either by squeezing more hours out of them, automating or outsourcing their jobs or just good old-fashioned “restructuring,” which is corporate-speak for laying off a bunch of people. Perhaps it’s time for business owners to begin to look for ways to improve productivity and profitability before doling out pink slips to their hardest-working staff.