To be a woman in "Westworld": HBO's brutality fetish still going strong in presumptive "Game of Thrones" successor

"Westworld" is beautiful, stylized, and proves HBO hasn't kicked its addiction to sexualized violence toward women 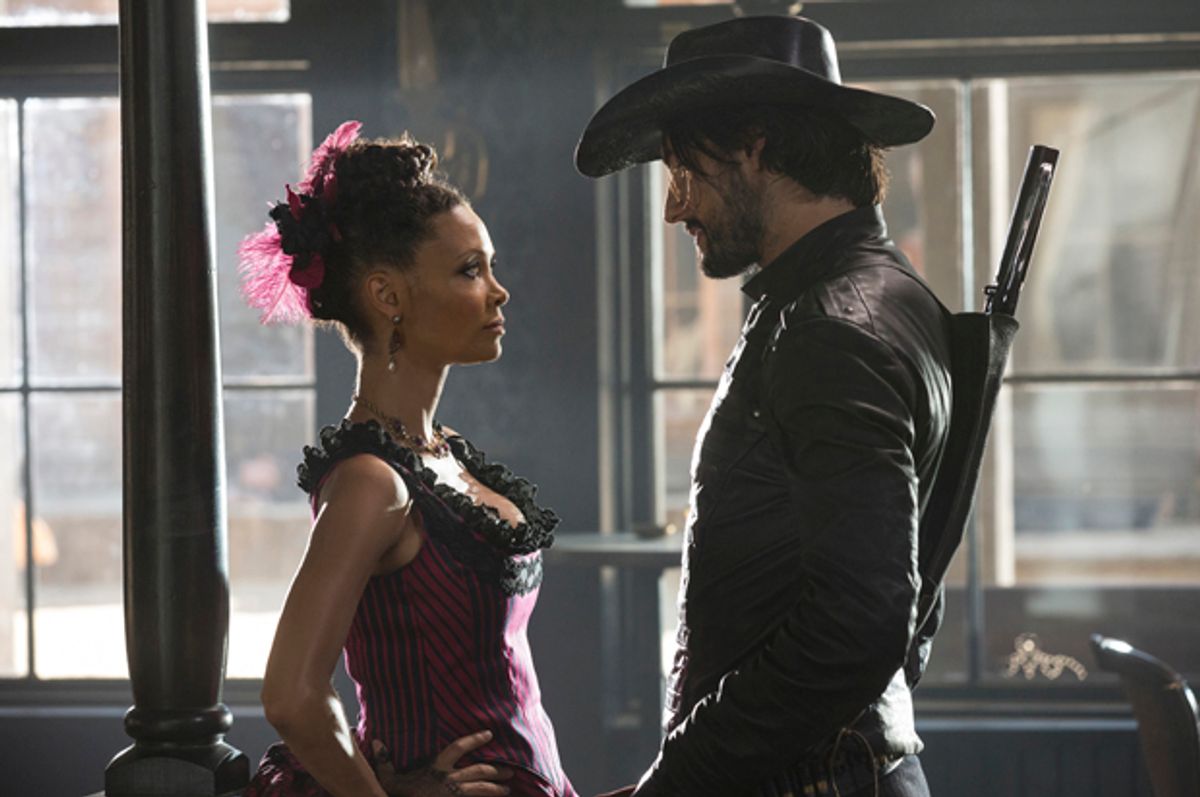 Everything in Westworld's theme park is bespoke – the clothes, the weapons, even the adventure itself caters to the individualized whims of its wealthy customers. The park offers a multitude of possibilities from the moment of arrival, from the second they board the luxurious train that takes them into the park to the moment they step off to enter its central town, Sweetwater.

Sweetwater has fine dining and whiskey, love for sale and shooting practice in the form of its artificial denizens, known as hosts, each of whom have been created to serve every indulgence of these “newcomers.”

Humans cannot be hurt in the park, but the further away that one ventures from Sweetwater, the more dangerous it gets. There’s no orientation, no guidebook, and there are games hidden within adventures, revealing escalating levels of difficulty. Figuring out how the place works is as much a part of the Westworld vacation experience as appreciating the finer details of its props.

Although the park acts as a multiverse to its visitors, “Westworld” the series, premiering at 9 p.m. Sunday on HBO,  is a study in duality. Visitors can be wolves or lambs; they can leave their real world personalities behind to go white hat or black hat. Inadvertently “Westworld” also acts as a metaphor for HBO's premium luxury brand as it holds up a mirror to the network’s troubling habits.

Let's get one truth squared away: Any viewer who has the slightest interest in this drama is likely to be fascinated by what he or she sees in its opening hour. “Westworld” has a stellar cast led by Sir Anthony Hopkins, Ed Harris, Jeffrey Wright, Thandie Newton, James Marsden and Evan Rachel Wood.

Dazzling cinematography makes the most of the production’s stunning vistas and elaborate sets, from the caramel brown of the desert hills to the jewel-toned silks and satins on the ladies offering comfort in town. As if to wash away memories of “Deadwood’s” grime, Sweetwater is intentionally slick, a place where even the bursts of bullet-riddled violence have a polish to them as well as safeguards.

As such, it is perfectly acceptable to harm, maim or kill the hosts because their memories are wiped after each incident. They’re serviced, reset and sent back out to repeat all the fun and brutality that visitors want to inflict upon them. No harm, no foul.

But as one character in the show’s corporate environment points out, Westworld is one thing to the guests, another thing to the shareholders and something altogether different to the management. Similar notions hold true of the role of the series itself, adding a level of thorny discomfort to its narrative. HBO hopes “Westworld” will grow into a hit that can eventually take the place of “Game of Thrones.” Likewise, viewers evaluating the worth of maintaining their subscriptions in the months that new episodes of “Thrones” aren’t running, might hope for the same.

For now, it’s safe to bet that the premium channel’s imprimatur remains strong enough that most subscribers may be willing to live with or even overlook some of the larger thematic flaws of “Westworld” on faith. “This place seduces everybody eventually,” one of the more odious characters tells another, referring to the park.

What about HBO itself?

The channel still hasn't kicked its disturbing habit of treating female flesh as a demarcation of brand boldness. It was one of the first channels to differentiate itself by displaying nudity and sexuality in its uncut films and later in its original programming. But somewhere along the way that idea morphed from a marker of edge and freedom into a fetish for savagery and more explicitly savagery in the form of sexualized violence perpetrated against women. (Most disturbing was HBO’s president of programming Casey Bloys' cavalier admission to reporters a few months ago that that he doesn’t see a difference between rape and murder in his series, viewing both as equally entertaining.)

The first installment of “Westworld” proves that HBO has not evolved away from that penchant; in fact, the park’s synthetic women are part of the getaway package. “All our hosts are here for you, myself included,” purrs the modelesque concierge who greets another visitor, and she’s not joking. The first women that visitors meet when they get to Sweetwater are the whores from the local brothel run by Maeve Millay (Thandie Newton). Maeve is an elegant, hard woman who barely blinks when lives are being snuffed out around her, something that occurs with frightening frequency. After all, not only are they just prostitutes; they’re not real either.

We also come to know Dolores Abernathy (Evan Rachel Wood), the sweet farmer’s daughter who fulfills the dream girl archetype. Dolores is an artist made drunk by the beauty all around her. She also is chaste and virginal, the ideal victim in need of heroic intervention.

All the artificial occupants of Sweetwater and the lands beyond, male and female, are dishes in an omnivore’s buffet. But women and their sexuality are prime pieces of fruit here, demonstrated almost immediately upon meeting Harris’ sinister Man in Black. They serve as treats for the taking or as tools enabling men like Teddy (Marsden) or William (Jimmi Simpson) to feel their testosterone surge in the role of the gunslinging knight.

But the hosts also exist to elicit the viewer's sympathy for their powerlessness, evoked in the shocked, deflated looks on their faces when they realize how defenseless they are.

The horror of these false lives is that nearly every aspect is scripted by a programmer. Maeve has seduction protocols she initiates when a fresh newcomer walks into her establishment, and she also plays a role in a several adventure storylines. Dolores also is locked into her part, some of which is completely innocuous and family friendly. At the end of the day, though, she’s still a woman in “Westworld.” A robot, sure, but one portrayed with such complexity, nuance and grace by Wood, as Newton does with Maeve, that any efforts to use that argument to excuse the viciousness visited upon them soon feel as hollow and flimsy as an old shell. The viewer is not inured to their suffering by knowing these characters are androids; they act and bleed just like people. Watching them die in massive sprees can feel even more sickening.

The writers’ hands aren’t even washed by the dynamics in the park’s adjacent corporate environment, the park’s toy shop, if you will. There, women hold important roles, but their personalities are not adequate counterweights to the maiden/prostitute dichotomy at play in Sweetwater.  One, Elsie Hughes (Shannon Woodward), is an engineer whose career is in ascension and who understands the subtleties of human behavior in a way her co-workers, most of them male, do not. Nevertheless, her abilities and expertise are often questioned.

Then there’s the head of quality assurance, Theresa Cullen (Sidse Babett Knudsen), who is part bean counter and part ball buster. Neither Elsie nor Theresa come across as particularly warm-blooded, which I suppose is part of the point.

Everyone in the factory seems more concerned about endowing their creations with realistic human qualities than behaving that way themselves, none more so than the park’s ambitious, mysterious founder Robert Ford (Hopkins) and his right-hand man Bernard Lowe (Wright).  This is a problem symptomatic to engineers operating from a paradigm that everything can be automated, built and optimized from the smallest iris to artificial emotional affect, from the epidermis to a soul.

But lacking much in the way of humanizing balance in that world behind the curtain, “Westworld” eventually feels cold and cynical and is yet another HBO series peddling violence, marvelous costume design and poet dialogue in the guise of some great philosophical statement about humanity. What that observation may be exactly is unclear.

Though the drama’s co-creators Jonathan Nolan and Lisa Joy set the table for an exploration of the perils of birthing artificial intelligence, perhaps with a side order of a parable concerning the nature fate and destiny, it’s also hard to get past the familiarity of this story structure.

For “Westworld” is a tale that we’ve seen many times before in film and television and read countless times in various books. Hopkins’ Ford comes from the same genre DNA as Eldon Tyrell from “Blade Runner” or Sir Peter Weyland of the “Alien” franchise; his lineage extends all way back to Mary Shelley’s legendary Victor Frankenstein. The hosts have cousins in “Battlestar Galactica,” in Data from “Star Trek: The Next Generation,” and the list goes on and on.

We know what happens in these stories, too. The creations free themselves from their masters, if not outright turning against them. Elsie and the head of security, Stubbs (Luke Hemsworth), remind us more than once that the only barriers existing between the hosts achieving a level of consciousness and rising up against the humans that keep them are a few lines of code. This makes "Westworld" less of a work inspired by Michael Crichton’s original 1973 film than a cover of a familiar tune, like one of the calculatedly ominous pop songs churning out of the self-playing piano in Maeve’s bar. We know their lyrics; we’ve merrily sung along to their refrains.  So if we know where this ditty leads . . . what then?

Nolan, who created and executive produced CBS’s “Person of Interest,” spent five seasons of that network television thriller playing with the possibilities and perils of emerging artificial intelligence. Knowing this, one may trust and infer that he and Joy plan to exploit our comfort with genre tropes to surprise us in later episodes. But if the writers have aspirations to lead the story into more original territory than the violent end the premiere foretells, it is initially difficult to see what those may be.

Ah, but let’s not forget that element of duality. “Westworld” may be problematic as an original drama but its presentation of a live-action massive multiplayer role-playing game is an interesting experiment. In essence, the park is a gigantic cinematic — those nonplayable animations that add context to a game’s plot and link missions to one another — populated with nonplayer characters with whom a person can do anything. And how a gamer treats an nonplayer character can vary by moment, mission or mood. Some earn our emotional attachment, while others are just cannon fodder or objects of abuse. Most nonplayer characters are conveniently amnesiac as well.

Even that angle is frayed by the nature of the park’s creations and the developing narrative. After the fifth or sixth time that we see a host with whom we connected be brutalized or outright murdered by some laughing, pistol-wielding jerk, it gets a little old, like a programming glitch that freezes the game in an endless loop.

Should “Westworld’s” ultimate purpose be to invite some level of self-examination within the audience, making us contemplate the callousness with which we give free rein to violence as sport, well done, then. That’s achieved by the end of the premiere. Considering the source, though, this idea has a bitter irony to it, making it tough to determine whether the drama’s ongoing investigation of existential concepts and morality is truly worthy of the time it will take to play this game through to the finish.