Trump's other, other Iraq lie: He's told differing stories about the 2011 troop withdrawal

Donald Trump blames Hillary Clinton for pulling troops out of Iraq, but in 2011 he blamed the Iraqi government 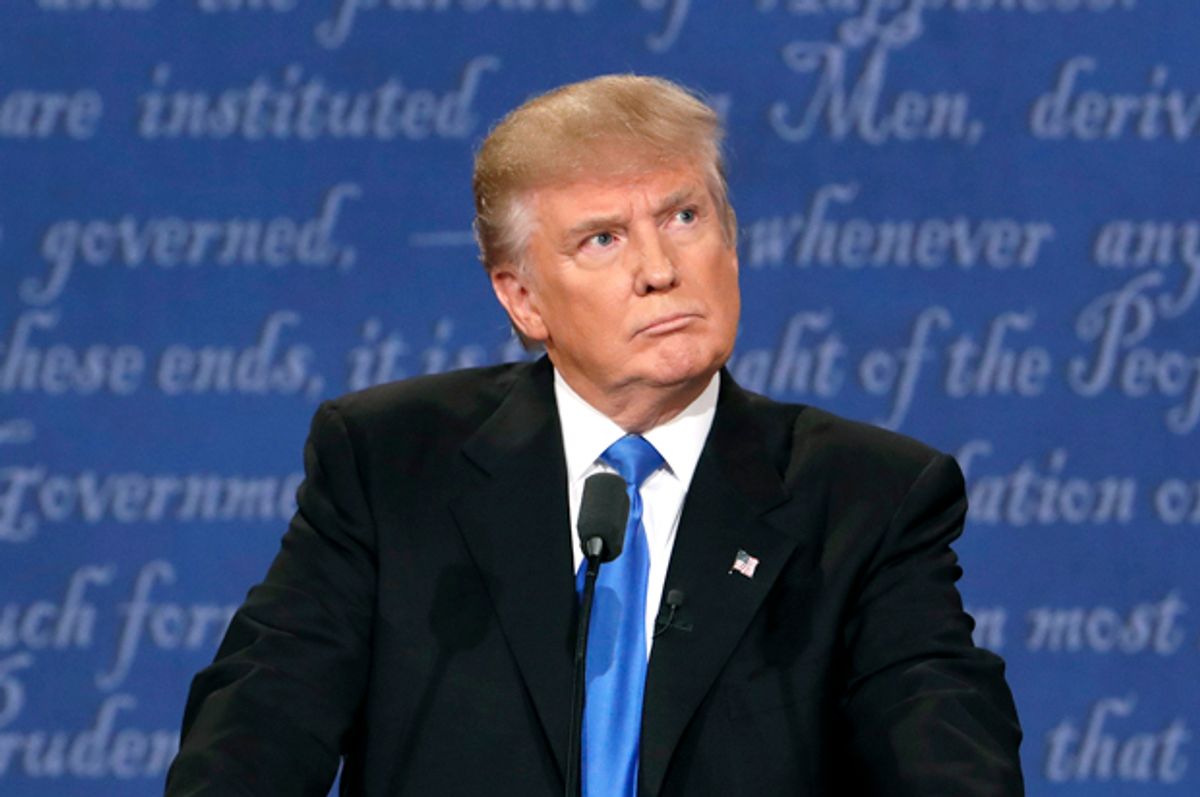 We find ourselves in a weird political space in which the Republican nominee for the presidency is trying desperately, and without much success, to convince everyone that he vocally opposed President George W. Bush’s 2003 invasion of Iraq. The issue came under renewed focus after Monday night’s debate when Donald Trump, confronted with the utter lack of evidence to support his supposedly vocal anti-war position, insisted that he had expressed his strong war opposition in private conversations with Fox News’ Sean Hannity, who could back him up on this.

Of course, one can’t really take Trump campaign ad star Sean Hannity as a credible source here, and the details of their supposed private Iraq colloquies remain elusive. It’s better to rely on their public statements. And in researching Hannity’s and Trump’s Iraq discussions over the years, I found still another inconsistency that undermines Trump’s position on Iraq and his critiques of his Democratic rival Hillary Clinton.

A big part of Trump’s attacks on Clinton’s judgment revolves around the idea that she and President Barack Obama created the Islamic State when they withdrew U.S. troops from Iraq in 2011. He made that exact point at Monday night’s debate:

That’s a grossly reductive and inaccurate explanation for how the Islamic State expanded into a greater terrorist threat, and Trump himself demanded an immediate withdrawal of U.S. forces in 2006, regardless of the consequences.

Nonetheless, Trump is now wedded to this idea that Obama and Clinton screwed up horribly by choosing to not leave American troops in Iraq in 2011. But that claim is inconsistent with what Trump was saying publicly at the time of the actual withdrawal.

Appearing on Sean Hannity’s Fox News show in December 2011, Trump blamed the withdrawal on the Iraqi government’s refusal to allow a continued U.S. troop presence in the country.

Here’s what Trump said, according to the Nexis transcript:

Iraq. They have the second largest oil fields in the world. We liberate Iraq. Now we got thrown out of Iraq by the way, just in case, you know, you have any doubt. We went to them, wanted to stay longer. They said, we don't want you — we can't get approval — you are out. Get out. So, you know, now they are talking about leaving. The fact is Iran, as soon, as sure as you are sitting there. Iran soon, when we are out, will take over Iraq. And they are going to take them over because of the oil fields. And I said, if that's going to happen, we should take over the oil fields. Very easy to do.

So, we leave Iraq, and we didn't leave, by the way. They threw us out, just so you understand, Wolf. I know you like the president and all that stuff, a little less than some of the folks at MSNBC, but we got thrown out of Iraq. We didn't leave Iraq. They said, we don't want you here anymore. The counsel said no. The head wants to say, they're not sure. Let me tell you, as sure as you're sitting there, Iran's going to take over Iraq, and they're going to take over those oil reserves.

Those statements were also gross oversimplifications of what happened, but they were closer to the truth than anything Trump says now. In December 2008, the Bush administration worked out an agreement with the Iraqi government that mandated the complete withdrawal of U.S. combat forces by the end of 2011. As that date approached, the Obama administration tried to renegotiate to allow for a residual force to remain behind, but the Iraqis would not agree to key legal protections for those troops, and there was no political will within the Iraqi government to extend the U.S. military presence.

And as it turns out, Trump’s 2011 remark syncs up nicely with what Clinton said at the debate in response to Trump’s attack. “The only way that American troops could have stayed in Iraq is to get an agreement from the then Iraqi government that would have protected our troops,” she said. “And the Iraqi government would not give that.”

So once again, Trump’s attacks on Clinton over Iraq are undermined by his own past statements. Maybe it’s possible that he told Sean Hannity something different in one of their secret Iraq chats. But it’s still better to judge him based on what he said with the cameras rolling.