The silence of the lambs: Why sheepish GOP leaders have been conspicuously quiet since Donald Trump's debate debacle

Before Monday's debate, top Republicans were starting to vocally support Donald Trump, but since then? Crickets 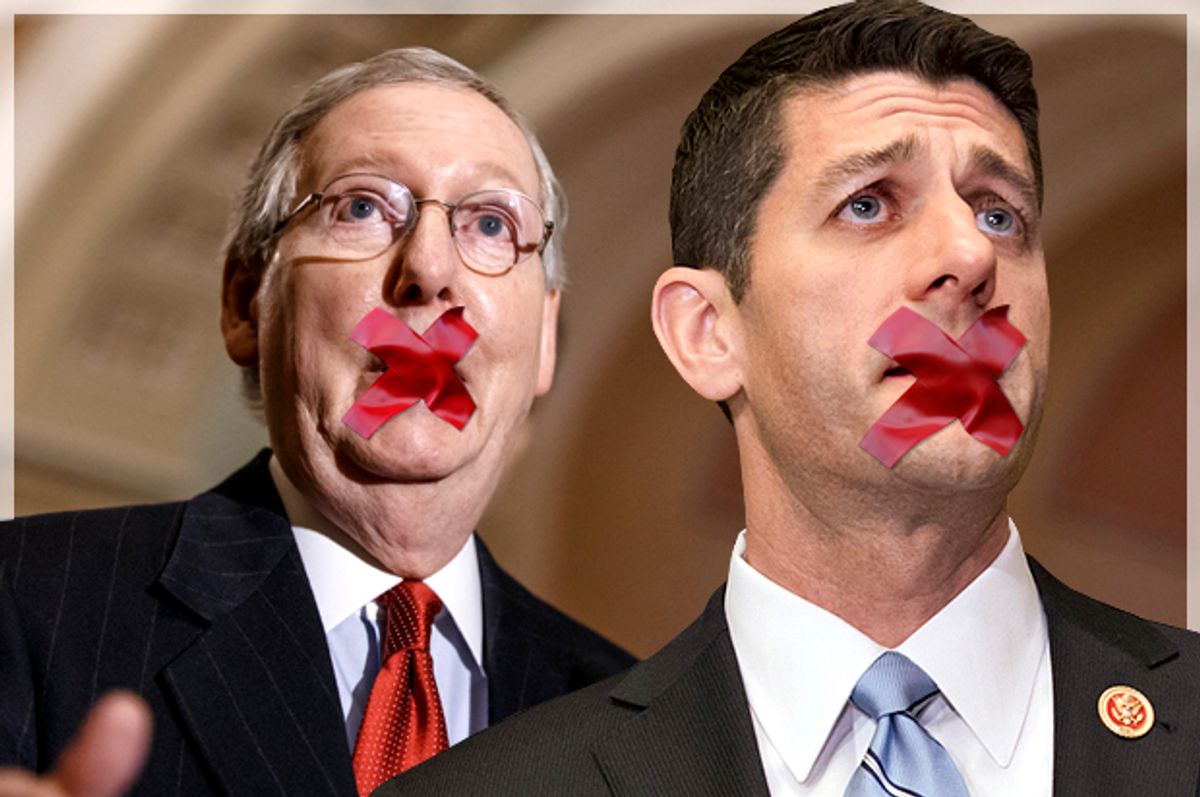 Early last week, if you squinted hard enough it was possible to see the Republican Party beginning to unite behind presidential nominee Donald Trump. It was not overwhelming support. Nor was it the full-throated endorsement a partisan might want for the party’s nominee. It was more tepid, trending toward lukewarm.

Still, it was possible to read in the narrowing polling gap between Trump and Democratic presidential nominee Hillary Clinton the possibility that Republicans who had spent months declaring themselves #NeverTrump were now coming home to the GOP. Prominent elected officials like Sen. Marco Rubio, who just a few months nearly broke down in tears over Trump’s success, and radio talk-show host Mark Levin, among others, decided the mogul was the lesser of two evils after all and gave him their grudging endorsements.

For crying out loud, even Ted Cruz endorsed Trump, after the latter had derided Cruz’s wife’s attractiveness and suggested the Texas senator’s father might have been an associate of Lee Harvey Oswald. The endorsement was likely a craven career move by Cruz more than it was a sign of newfound warmth towards his party’s nominee. But considering his antics on the stage of the Republican National Convention two months ago, this might as well have been the Camp David accords.

Then came Monday night, and a Trump performance that ranked as likely the worst ever turned in by a major party nominee in a presidential debate. All of a sudden, you could not find anyone besides Rush Limbaugh and congressional back benchers like Marsha Blackburn to defend the GOP’s standard bearer.

For example, RNC chairman Reince Priebus has been missing in action since Monday. Ahead of the debate he tried his hardest to put a positive face on the pile of rotted orange peels in a suit that his party had nominated by suggesting that 14 season finales of Trump's reality show “The Apprentice” had prepared him for the debate. Priebus' Twitter feed, which he has regularly used to slam Clinton, has been almost entirely silent.

GOP congressional leaders have said as little as possible. House Speaker Paul Ryan, whose relationship with Trump has been tenuous, tried to have it both ways. He called the nominee’s performance “a unique Donald Trump response to the status quo” — but also suggested he should actually, you know, prepare for the next debate. Senate Majority Leader Mitch McConell said Trump did “just fine,” which is what a Southerner says when he means the exact opposite.

McConnell’s caucus wasn’t much more forthcoming. Sen. John McCain, who has almost never met a reporter he wouldn’t chat up, would only say the debate was “interesting.” Sen. Lindsey Graham echoed Ryan by telling Trump to practice more. Rubio tried the time-honored dodge of telling reporters that he had missed the debate because he had been on a plane at the time but would catch the “highlights” later. As the British might say, pull the other one.

About the only well-known Republican to defend Trump, besides Limbaugh, was Cruz. The Texas senator, who seems to have gotten over his alleged hatred of the nominee, lavished praise on him while speaking to radio host Hugh Hewitt. But considering how low Cruz's approval ratings are in Texas, this seems like a transparently desperate move.

If debates are an opportunity to excite your base, then Trump seems to have completely whiffed with the first one. But more than that, it seems that his terrible night may have repelled already-skittish allies who were just starting to finally come around to his candidacy. Now they are distancing themselves as fast as possible, and not worrying about how awkward they might look while doing so.

Meanwhile, newspapers that had not endorsed a Democrat for president in decades or even over a century are endorsing Clinton while calling Trump’s myriad character flaws “disqualifying.” Anonymous leaks from the campaign on Wednesday painted a picture of its staff second-guessing itself and the boss while suggesting that Trump’s kids are unhappy enough to push their father to fire his top lieutenants and start over. And it doesn’t look as if there is anyone in the Republican Party who can step in and smooth things over.

This does not happen with campaigns that are confident of impending victory.

With six weeks to go until the election, it seems likely that the Republican elite will now completely hunker down, smile politely while keeping Trump at arm’s length (so that he doesn’t drag down with him members locked in tight re-election battles) and hope that the GOP can hold onto its Senate majority. Then assuming he goes down to a resounding defeat, the Republican elite can maybe reclaim the party from the virulent Trumpism that has infected it.

It is not much of a plan. But at this point, even a sudden discipline and yen for practice is probably not going to help Trump give even a moderately competent performance in a debate with Clinton. Even if he could suddenly turn into the second coming of Stephen Douglas, this is unlikely to make a difference with the voters. The GOP, after a brief moment of hope, is trying to get clear of the explosion to minimize the damage. We will see if it is a successful effort.