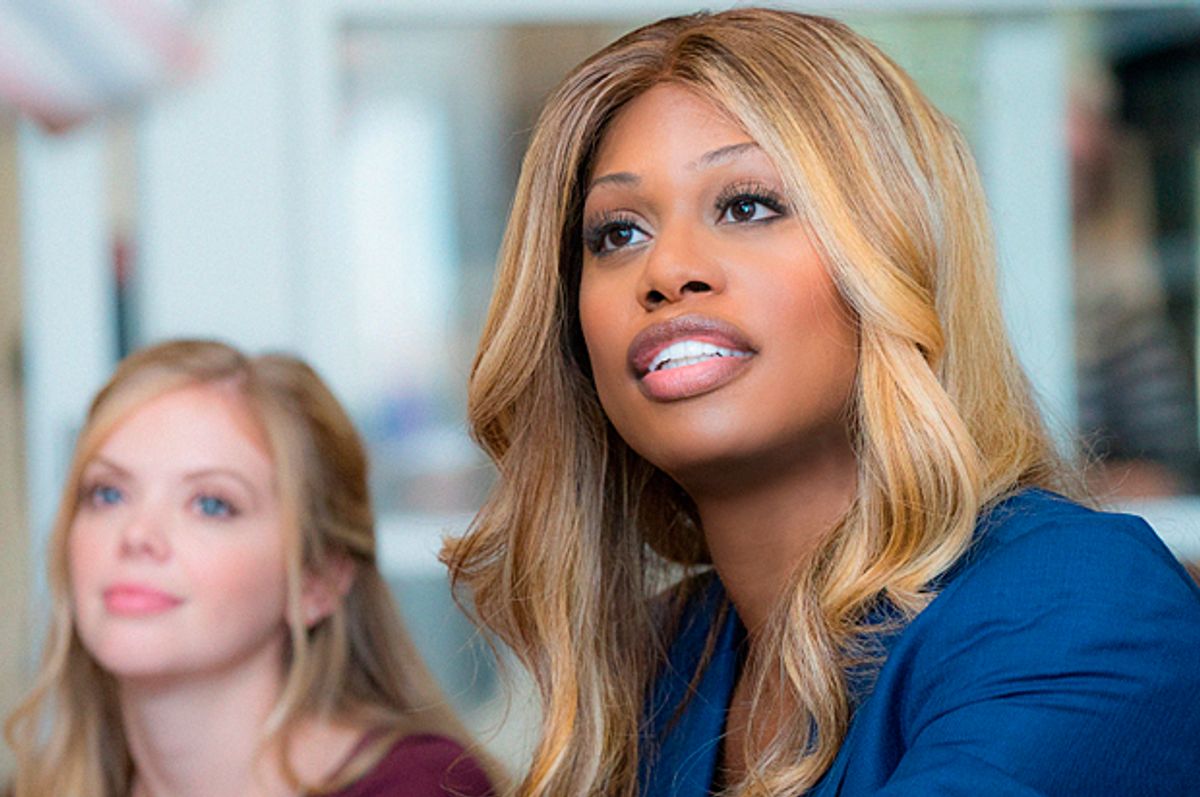 Wednesday’s episode of “Modern Family” debuted the first transgender child actor in prime-time history. Jackson Millarker, an 8-year-old from Atlanta, guested on the long-running sitcom as Tom, a trans schoolmate of Lily (Aubrey Anderson-Emmons), the adopted daughter of Mitchell (Jesse Tyler Ferguson) and Cam (Eric Stonestreet). When Lily calls Tom a hurtful name during a play date, the moment forces the couple to reflect on what lessons they are teaching Lily. Are Mitchell and Cam really as accepting as they think?

Millarker’s groundbreaking casting followed the news that trans actress Jen Richards will join the cast of “Nashville,” the country music soap starring Connie Britton (“Friday Night Lights”) and Hayden Panettiere (“Heroes”). Richards, who was nominated for an Emmy for writing, starring in and producing the web series “Her Story,” will become the first trans actress to ever appear on CMT. The music-oriented network picked up “Nashville” after it was cancelled by ABC in May. The show, which will premiere its fifth season on Jan. 5, will also boast the first trans character in the channel’s history. Richards is set to play Allyson Del Lago, described in a network press release as a “tough but understanding physical therapist.”

These are just a few of the many “firsts” made by TV in recent years when it comes to trans media representation. In 2014, Laverne Cox became the first transgender actor nominated for an Emmy for her role as Sophia Burset on Netflix’s “Orange Is the New Black.” Cox will also appear in the forthcoming CBS legal drama “Doubt,” co-starring Katherine Heigl. The actress will appear as Cameron Wirth, a high-powered trans lawyer. The mid-season entry will make Cox the first trans actor to be a series regular on a network show.

Meanwhile, Jeffrey Tambor recently took home his second consecutive Emmy for Outstanding Actor in a Comedy for Amazon’s family dramedy “Transparent.” Tambor, most widely known to audiences as George Sr. on “Arrested Development,” plays Maura Pfefferman, a late-life transitioner who comes out to her neurotic Jewish family. The show, created by Jill Soloway (“Afternoon Delight”), has been criticized for casting a cisgender male actor in a trans role. As LGBT activists argue, “Transparent” misgenders trans people, unintentionally furthering the view that women like Maura are no more than “men in dresses.”

During his Emmys speech, Tambor acknowledged criticism of the show, saying that he would “not be unhappy” if he were “the last cisgender man to play a female transgender on TV.” The 72-year-old pleaded with Hollywood to “give transgender talent a chance, give them auditions, [and] give them their stories.” Despite the justified concerns about Tambor’s performance, “Transparent” has helped to open doors for trans actors by casting Hari Nef, Trace Lysette and Alexandra Billings in supporting parts. The show’s new season also features 12-year-old actress Sophia Grace Gianna, who plays Maura in flashbacks. During the character’s upbringing in the 1950s, the youngster is chastised for wanting to wear women’s clothing.

The difference between shows like “Transparent” and “Modern Family,” though, is one of reach. “Transparent,” like “Orange Is the New Black,” is broadcast on a paid streaming platform and attracts a relatively niche, liberal audience. Its viewers are likely to share the show’s values when it comes to LGBT acceptance. “Modern Family,” however, has an appeal that is surprisingly conservative. In a 2010 survey, the ABC show was found to be the favorite scripted series among members of the GOP, beating out “The Big Bang Theory” and “The Mentalist.”

At face value, the right-wing popularity of “Modern Family” would seem to be a strange fate. When the mockumentary-style comedy debuted in 2009, it was billed as the “hip,” “innovative” alternative to the laugh track-heavy offerings of the ’90s (think “Home Improvement”). But Christian Toto of Breitbart argues that it’s the show’s values of “friendship, trust, [and] loyalty” that resonate with heartland viewers. “‘Modern Family’ suggests that families of all shapes and sizes are equal,” Toto writes, adding: “The series is all about ties that bind and strengthen us, even if we end up in families that appear radically different than the ones we watched in the ’50s and ’60s on TV.”

“Modern Family,” which includes both same-sex and interracial couples, has been credited with normalizing gay relationships for viewers who might not know families like Mitchell and Cam’s. When the show premiered seven years ago, gay couples could get married in just four U.S. states — Iowa, Massachusetts, Connecticut and Vermont. At the time, the Pew Research Center found that just 40 percent of Americans believed that all marriages are entitled to legal recognition. Following the Supreme Court’s 2015 decision to legalize same-sex unions in all 50 states, that figure shot up to 58 percent.

The show would be cited as a factor in the country’s increasing acceptance of marriage equality. According to a 2012 survey from The Hollywood Reporter, 27 percent of respondents said that programs like “Modern Family” made them more accepting of same-sex couples. This impact was felt across party lines: Whereas 30 percent of Democrats claimed that LGBT-inclusive media made them more tolerant, 13 percent of Republicans said the same. THR further noted that Michelle Obama and Ann Romney both count themselves as fans of the show.

“Nashville” is unlikely have the same effect as ABC’s smash-hit comedy. Whereas “Modern Family” reached 15 million viewers at its peak, the showbiz drama’s audience maxed out at 8.93 million. Just over 4 million people bid the show farewell during its network bon voyage; meanwhile, CMT’s highest-rated show reaches just over a million viewers. What the revamped “Nashville,” which is set to be executive produced by “Thirtysomething” creators Marshall Herskovitz and Ed Zwick, lacks in ratings it will, however, make up for in demographics: CMT appeals to Red State Americans, the kinds of viewers who listen to Toby Keith, and who might not know someone like Allyson Del Lago or Maura Pfefferman.

Learning about trans people’s stories and lives can serve to humanize their struggles. Currently, UCLA’s Williams Institute estimates that there are just 1.4 million transgender people living in the U.S. In the CMT show’s home state of Tennessee, the trans population amounts to just 31,200. Despite recent gains in mainstream media representation, this community remains disproportionately targeted for violence, particularly trans women of color. So far this year, 19 trans people have been murdered in the U.S., and that doesn’t include the deaths that weren’t reported to authorities.

The bipartisan success of “Modern Family” helped show Americans that couples like Cam and Mitchell deserve the same rights are everyone else — the ability to have their love recognized and protected. Seven years later, bringing trans characters into the living rooms of Red State voters won’t just open hearts and minds. It could make America a little bit safer for those who remain the most vulnerable among us.