Saudi Arabia is using a hellish skin-scourging chemical, supplied by the U.S., in Yemen. Is it a war crime? 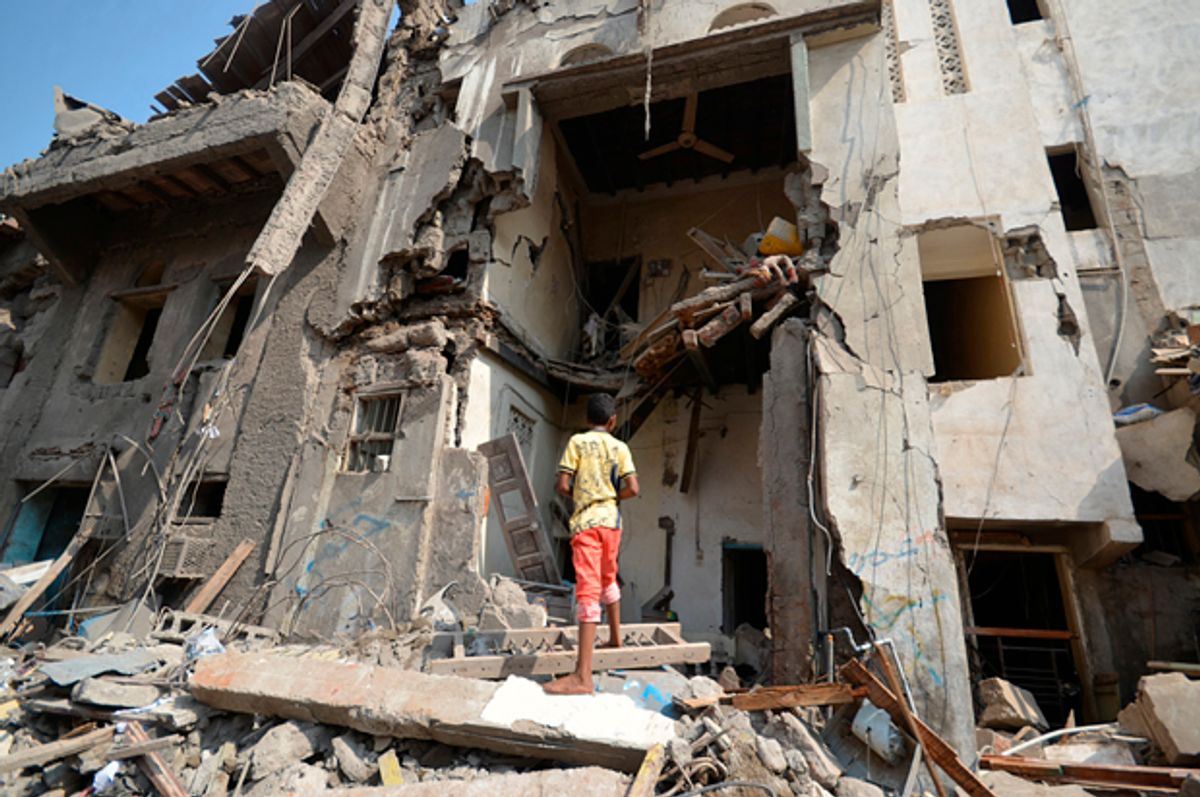 A boy looks at a damaged house at the site of a Saudi-led air strike in the Red Sea port city of Hodeidah, Yemen September 22, 2016. (Reuters/Abduljabbar Zeyad)
--

The Washington Post reported last week that a Saudi-led coalition that has waged war in Yemen for 18 months appears to be using a dangerous chemical called white phosphorus, supplied by the United States. A U.S. government official confirmed to the Post that a photo shared on social media appears to show U.S.-made white phosphorus, but did not trace it to a particular sale.

The way that this material is being used remains unclear, however. White phosphorus can be used in a nonlethal capacity to create smoke screens or signal to other troops. When used as a weapon, on the other hand, white phosphorous can burn through skin down to the bone, and essentially cannot be put out with water.

When Salon reached out to the State Department to request more information on exactly how this dangerous chemical is being used in warfare, an official replied by email, "We are aware of these reports based on social media postings and are looking into them."

The State Department official further explained: "The United States and Saudi Arabia have a long-established security relationship. As part of that relationship, the United States has, in the past, transferred to Saudi Arabia a variety of systems, including ammunition rounds that contain white phosphorus. Such rounds containing white phosphorus are designed for marking targets and to produce smoke to obscure troop movements."

When Salon reached out to the Department of Defense, spokesperson Christopher Sherwood responded by email, "The United States expects any recipient of U.S. military assistance to use those items in accordance with international law and under the terms and conditions of any U.S. transfer or sale." He then directed Salon to request further information from the State Department, which oversees military sales.

The State Department also recommended that Salon contact the Saudi government for information on its use of ammunition containing white phosphorus. Salon emailed the Saudi Ministry of Foreign Affairs, but it did not return the request for comment.

Mark Hiznay, associate arms director at Human Rights Watch, told Salon that the projectiles in the social-media photos in the Washington Post story "are indeed WP," using a common abbreviation for white phosphorous.

"What is not known is where these munitions are being fired into, and whether they they are impacting in areas with concentrations of civilians," Hiznay said via email.

"It's also unclear if the Saudis are using the WP as an obscurant in a smoke screen, for marking or signaling, or for antipersonnel/anti-materiel effect," he added.

Hiznay said Human Rights Watch is "trying to locate and document areas in Yemen attacked with WP, but it's not easy to do remotely."

Human Rights Watch could not find public records detailing the types and quantities of white phosphorus munitions transferred to Saudi Arabia by the U.S. or the dates they were transferred.

"We are concerned about WP  being used to target combatants or destroy equipment that are commingled with civilians or civilian objects," Hiznay said. "International humanitarian law is weak in this area and we are calling on states party to the Incendiary Weapons Protocol to strengthen existing rules when they meet in Geneva in December."

Amnesty International also could not confirm how the U.S.-supplied white phosphorus is being used. The rights group said it is investigating.

Since March 2015, a Saudi-led coalition armed and supported by the U.S. and the United Kingdom has waged a destructive bombing campaign in Yemen against Houthi rebels and militants loyal to former president Ali Abdullah Saleh.

Human Rights Watch and Amnesty International have documented atrocities committed by the U.S.-backed coalition in Yemen and have accused it of war crimes.

The Saudi-led coalition has used U.S.-made cluster bombs in civilian areas. Cluster munitions are banned in much of the world. Amnesty International has documented the coalition's use of cluster munitions that were manufactured in the U.S., the U.K. and Brazil.

The American Chemical Society has noted in a scientific article that "common fire-fighting agents unfortunately cannot be used to extinguish burning phosphorus because this substance tends to reignite quickly whenever it gains access to the air — for example, upon evaporation of water which has been used for quenching."

And the military news website GlobalSecurity.org has warned, "These weapons are particularly nasty because white phosphorus continues to burn until it disappears. If service members are hit by pieces of white phosphorus, it could burn right down to the bone."

James Calvert, a professor of emeritus of engineering at the University of Denver, wrote on his faculty website that, when used in war, white phosphorus is "a particularly nasty incendiary agent."

White phosphorus "sticks to whatever it hits, burns, and if what it has hit is combustible, sets it on fire," Calvert wrote. "Water will put out white phosphorus temporarily, but as soon as the phosphorus has access to air, it will start burning again. White phosphorus wounds are very unpleasant, since the phosphorus must be thoroughly washed out with a nonpolar solvent that is also noninflammable, for obvious reasons, before the burn can be treated."

Another report by the Washington Post last week revealed that U.S. forces are again using white phosphorus in Iraq, although it is unclear how or for what purpose.

Hiznay told Salon that Human Rights Watch is also investigating where and how white phosphorus projectiles are being used by U.S. forces in Iraq.

Given reports by human rights groups documenting war crimes committed by the Saudi-led coalition in Yemen, Salon asked the State Department if it is concerned that Saudi Arabia could potentially use U.S.-provided white phosphorous as a weapon in a similar manner.

"The United States expects any recipient of U.S. military assistance to use those items in accordance with international law and under the terms and conditions of any U.S. transfer or sale," a State Department official wrote in an email. "If a country is determined to have used U.S.-provided weapons for unauthorized purposes, the U.S. will take appropriate corrective action."

The official added, "The United States is deeply concerned by civilian casualties on all sides of the conflict in Yemen, and urges all sides to resume a cessation of hostilities to create the conditions necessary to reach a comprehensive and durable peace agreement. We are engaging the Saudis on the prevention of such losses of life, and continue to support diplomatic efforts that can bring the conflict to an end."

Expressing concern with war crimes committed in Yemen, lawmakers of the two major parties and both chambers of Congress have tried to take action to block U.S. arms sales to Saudi Arabia.

The Obama administration has offered Saudi Arabia more than $115 billion worth of arms sales.

The Senate debated a joint resolution last week that would have halted a $1.15 billion U.S. weapons deal with Saudi Arabia. Senators voted 71 to 27 to table the measure, effectively defeating it.

On the same day that the bill was shot down, the U.S.-backed, Saudi-led coalition killed at least 19 Yemeni civilians in an air strike.