These jokes aren't funny anymore: Can we all agree now that the third-party candidates are useless?

We want vital third parties and serious alternatives — instead we get Gary Johnson, Evan McMullin and Jill Stein 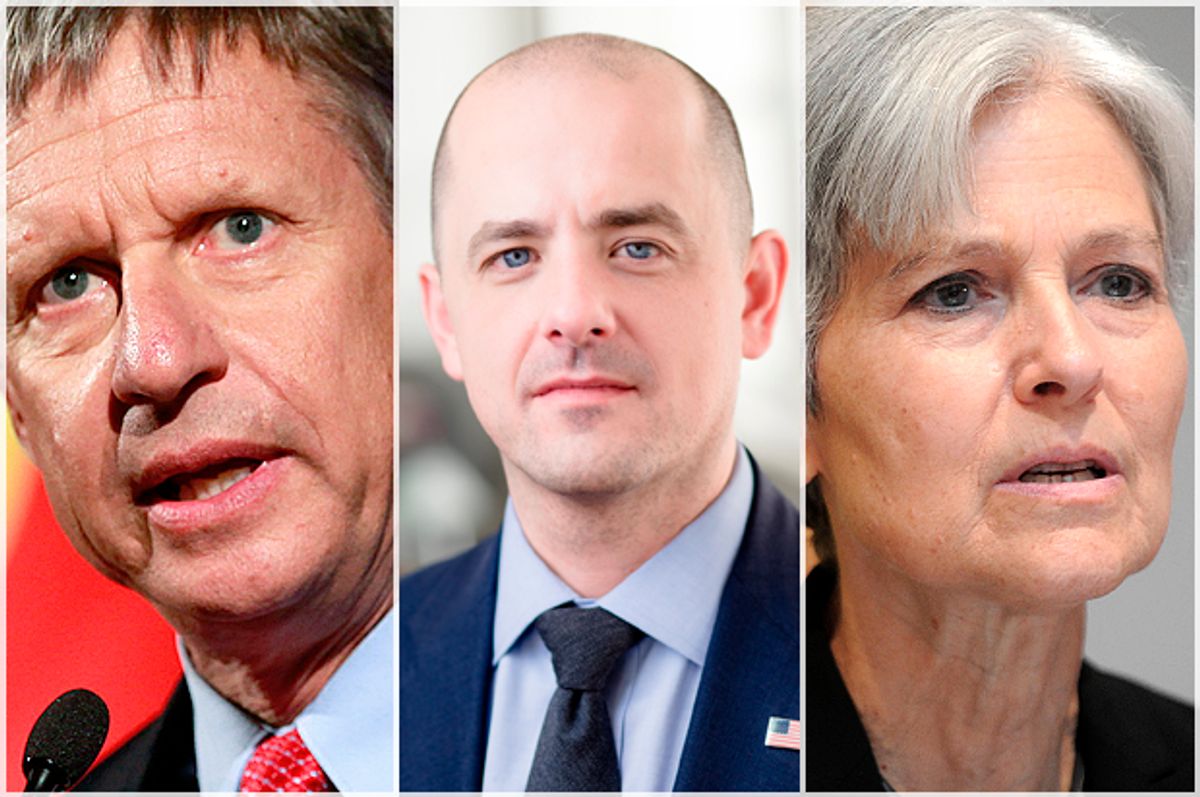 The latest brain freeze by the Libertarian Party’s presidential candidate came during a town hall broadcast on MSNBC and hosted by the channel’s human bullhorn, Chris Matthews. Asked to name a current foreign leader he admires, Johnson could not come up with a single name. (To be fair, his vice presidential running mate William Weld didn’t do much better, blurting out the name of Israel’s Shimon Peres, who has not held office for two years and is also dead.)

In the middle of his brain freeze, Johnson commented that he was having another “Aleppo moment,” a reference to his now-infamous appearance on “Morning Joe” three weeks ago, when he was asked how he would handle the situation in the city that is the epicenter of Syria’s civil war and responded by asking, “What is Aleppo?”

Watching this latest incidence of Johnsonian vapor lock, a couple of thoughts came to mind:

It is this last point that is most baffling. Sure, Johnson is on the ballot in all 50 states. Sure, he and Green Party nominee Jill Stein and even independent conservative candidate Evan McMullin represent views relegated to the fringes of the major parties but that might appeal to a wider range of voters if they could only get more exposure. (McMullin seems to be a doctrinaire conservative who is not afraid of ticking off the GOP base, a rarity in the Republican Party at the moment.)

Yes, in a democracy that prizes free expression, it is important to hear different points of view, within reason. (Jill Stein might have a good point on universal health care, for example, but last I checked there is no evidence to support her contention that Wi-Fi is frying children’s brains.)

The problem is that a presidential race is not the place to air these views if one is not a truly viable presidential candidate. Relegated to the low-single digits in the polls (Public Policy Polling’s latest national poll has these three candidates pulling a collective 9 percent), the Libertarians and the Green Party are a sideshow, entertaining us mostly by being silly distractions from the intense, constant, laser-like focus on Republican presidential nominee Donald Trump and his rival Hillary Clinton.

Part of the problem, as Katie Aronoff spells out in an essay arguing that the left deserves a better candidate than Stein, is that the Green Party “falls into the same traps” that so often hurt Democrats in midterm elections. Aronoff wrote:

"Putting too much emphasis on the presidency and the electoral process itself, while declining to undertake the kind of deep organizing necessary to alter the state of play in these arenas. The result, for the Greens, is a politics too interested in being right, and not enough in actually taking state power."

The same can be said of the libertarians, who can exist, often uneasily, within the Republican Party but usually get scoffed at or even outright ignored when it comes to some of their core issues.

The problem with only popping up every four years to pull 1 percent of the popular vote is that a candidate and a party become nothing more than a statistically insignificant protest vote, an expression of the “voter-as-atomistic-consumer” model of political expression. In our winner-take-all system, such votes of conscience do nothing but marginalize the voters who cast them and the candidates they support.

As a result, the smaller parties seem to nominate, every four years, someone like Stein or Johnson — candidates with a handful of views that might line up with the major parties but also with a need to grab attention by drawing ever-greater and ever-more-ridiculous contrasts with them.

Thus you get Johnson’s personality that mixes goofiness and hyperactivity to the point of making him seem unserious. (If Democratic vice presidential nominee Tim Kaine is America’s lovably dorky dad, Johnson is its divorced stoner dad who forgets to pick us up every other weekend.) Thus you get Stein’s refusal to distinguish policy and temperament differences between Clinton and Trump, a view of national politics so unsophisticated and self-serving as to be undeserving of comment.

This lack of sophistication might not be the reason Stein often polls lower than Harambe, the dead gorilla reborn as an internet meme. But it can’t help.

Our system’s winner-take-all setup has accommodated vibrant third parties in the past under similar historical circumstances to those that we are now living through. So it is a bit sad that even our minor parties are as unprepared for coping with this historical moment as the major parties seem to be.