The irreverent millennial-caricature said he's worried someone "will see my hand ... and start fearing me" 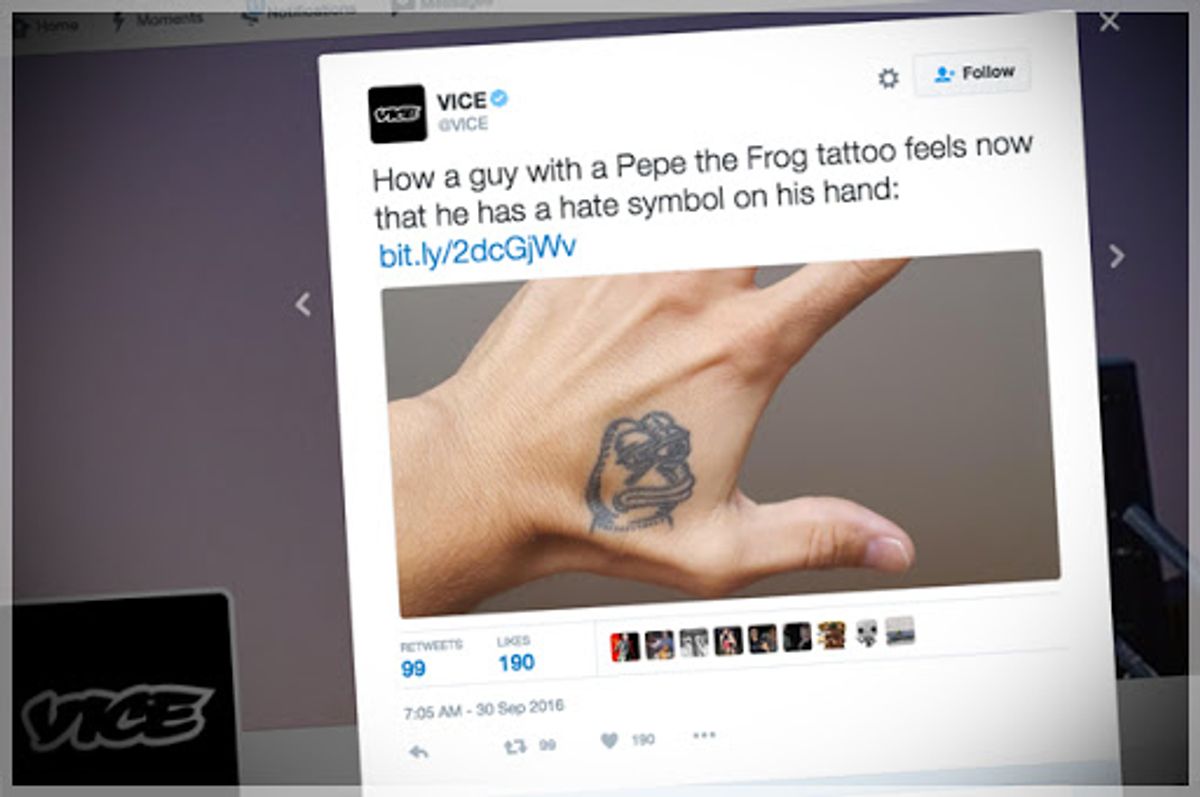 Vice News — being what it is — published an interview on Friday with a grown-ass man who has a tattoo of Pepe the Frog on his hand.

New York City-based writer-director Adam Humphreys got his Pepe tattoo, he thinks, in March 2015 after becoming "obsessed" with pictures of the anthropomorphic frog on Ello — an online gallery for artists to share their work.

"Each Pepe was kind of different, maybe showed him in a different situation, which reflected its creator, who was just somebody on the other end of a computer somewhere," Humphreys told Vice (presumably over email, based on the words he used). "The constant was the figure of Pepe, and the spirit of Pepe, which was masculine, downtrodden, somewhat pathetic, and totally relatable."

For the uninitiated, Pepe the Frog is a cartoon adopted by and synonymous with the alt-right. The Anti-Defamation League recently designated the meme a hate symbol akin to the swastika and Confederate flag.

Pepe wasn't always an anti-Semite, though. The original "sad frog meme," as it was known, started with a Microsoft Paint drawing by cartoonist Matt Furie, who posted the comic on his Myspace in 2005. Around 2008, Pepe became a running joke on the anonymous message board 4chan. The meme ultimately became politicized with Donald Trump's 2016 presidential candidacy.

"I spent a couple of evenings on LSD AirPlaying images of Pepe with my wife Lauren and two friends — I felt really happy," Humphreys added of his (tellingly impulsive) decision process. "My friend's girlfriend later made a Pepe stamp for him. The moment I saw it, I stamped myself, went to a tattoo parlor, and had the guy trace the stamp into my left hand."

Humphreys said he's considering getting the hand tattoo removed, but wants the ADL to foot the bill.

"I'm not opposed to removal, especially if the hate symbol meaning congeals further, which could inconvenience me more," he said. "But I think it would be only fair for the ADL to pay for the process as well as some damages. (For the pain, the lost art, potential scarring, etc.)"

"I'm worried someone without context will see my hand on a bus or something and start fearing me," he said, "or thinking there are more white supremacists and that they are a bigger threat than they really are. A grandma, maybe."

What grandma would even know what Pepe the Frog symbolizes? This one.