Bill Maher speaks his truth: "I have never, in my entire 23 years on television, tried to offend people"

Salon talks to the outspoken host of "Real Time" about being a politically incorrect progressive, Islam and Trump 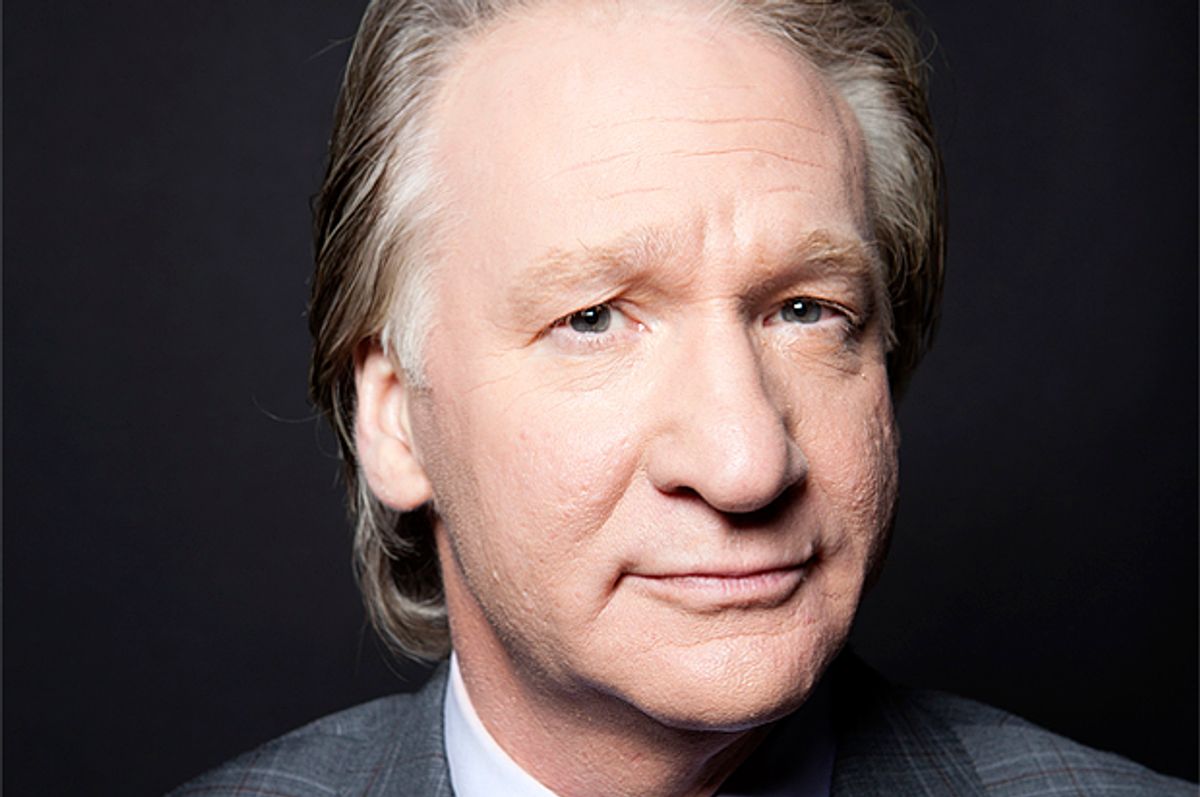 The comedian and television host Bill Maher is alternatively beloved and despised — and that’s doubly true for the people who watch his shows. A man with mostly progressive values who frequently denounces “political correctness,” an advocate of tolerance who harshly criticizes Muslims, he is either a major contradiction or the most honest and consistent man in the world.

This week the free speech organization PEN Center USA gave Maher its First Amendment Award at a ceremony in Beverly Hills. (The award was given by Sean Penn, who called the host “entirely unafflicted by the curse of people pleasing.”)

Maher, best known for his show “Politically Incorrect,” which started in 1993, and the program he has hosted on HBO since 2003, “Real Time,” spoke to Salon from his Los Angeles office. The interview has been lightly edited for clarity.

This is an important award you are getting tonight, from a group dedicated to fighting for freedom of speech, sometimes internationally. I wonder how you see yourself fitting into the tradition that the PEN Center represents.

This is not the first First Amendment award that I have gotten. I am proud of them because I think these organizations recognize that even though every television show I see — not every show; of course, I am not talking about “Dancing with the Stars.” I am talking about shows that deal with content, CNN, "The No Bullshit Zone," "No Spin" — everybody tries to present themselves as, “You’re not getting away with any bullshit here.” And of course they are all full of shit.

And I think they recognize that “Real Time,” and before that “Politically Incorrect,” was the place where we really do practice free speech. And free speech — as anyone who has ever gotten one of these awards [has] noted — is being able to say things that are not popular, as well as the things that are popular. But anyone can defend the popular. It’s the Supreme Court standing up for the right of Nazis to march in the town of Skokie with all of its Holocaust survivors. That is what makes America different.

This a First Amendment award. You are being honored in the name of the American Constitution. I wonder if it is different, though, in other parts of the world —

Whatever is wrong with the States, we don’t really have a recent tradition, post-McCarthy at least, of artists, writers, etc., being tortured, imprisoned, exiled and so on. Aren’t we lucky that people like you can go on a TV show and be paid for being provocative?

Incredibly lucky. And I try to make that point over and over again.

So it wasn’t like the moderate country of Jordan, a country we do hold up as moderate, was on the other side of this debate. They were just slightly more moderate. People have different ideas of the definition of moderate. But to me, it is not moderate when you put someone on trial for sharing a cartoon on your Facebook page. Let’s not kid ourselves; there is a front line in this war against free speech, and it has to do with one particular religion, and that’s not bigotry; it’s just the truth.

What’s the riskiest thing that an American comedian, that an American writer, American truth teller can do? What are the stakes of it? Specifically, how have you paid for your forthrightness? I know there was a movement to cancel your show after 9/11.

A movement that was successful. Well, certainly that was a casualty. Although it turned out pretty good because I like the show I am doing now a lot better. But to answer your first question, "What is the riskiest thing?" We all know what the riskiest thing is, don’t we?

It would be in any way depicting the Prophet Muhammad. That’s the riskiest thing and we all know what the repercussions are. Again, I think many in the liberal community say, “Well, that’s a bunch of fanatics.” Well it’s only a bunch of fanatics, I’ll give you this, who would actually carry out the execution like they did at Charlie Hebdo. But if you think that there are not tens, if not hundreds of millions of Muslims around the world who cheered that, then you are being very naive.

You are saying that what happened in Paris wasn’t an anomaly.

I am saying that the belief that you should die for making fun of a book or a prophet is much more mainstream in Islamic culture than it is in other cultures. In fact, death for leaving the religion, death for making fun of the religion, death by stoning for adultery, death in a number of countries for just for being gay. I have never come across a culture where “we kill you” is the answer to more issues. And I am an American. So that’s not bigotry; that’s just the way it is in the world. I know that liberals get their back up about this. But I find it very ironic because liberals are supposed to defend liberal principles. And certainly the First Amendment — I have said this before — liberals should own the First Amendment the way conservatives own the Second Amendment.

And yet liberals and progressives have a complicated and increasingly fraught relationship with the First Amendment these days.

Because it conflicts with political correctness.

Right, that’s sort of where I was going.

One thing that has come up recently was with one of your colleagues, ["Tonight Show" host] Jimmy Fallon, in his treatment of Donald Trump, which was mostly friendly. Do you think that hosts, entertainers are obligated to create a political environment in their show? It was primarily liberals who complained that Jimmy Fallon had not done what they wanted him to do, when he kidded around and mussed Trump’s hair and so on. How do you see that one?

Because I am not going to muss their hair. I am going to muss what’s inside. And I don’t expect Jimmy Fallon to do anything more than [that] because that’s exactly who he is. Expecting Jimmy Fallon to grill a politician — you know, it’s like expecting SpongeBob to do an episode on genital female mutilation. It’s just not going to happen. But it is a shame that we live in this environment where politicians can go on these shows and they do make an unholy alliance with the show: “You ask me softball questions and I’ll come on your show and give you good ratings.” And I won’t make that appeal. That’s why I am getting the award today.

Part of what you and your show stand for is the freedom to be direct and provocative and honest; it’s very different from the way most politicians and most pundits behave and it is sort of weirdly close to the way Donald Trump acts. I wonder if despite your intense dislike of his politics, if there is a side of you that respects his uninhibited style.

I think we all thought that in the beginning, that we have been choking on political correctness for so long especially in the ranks of politicians, that it was a breath of fresh air, when a politician came along and the first time somebody said, “Oh, I am offended by your remark,” that politician didn’t immediately go to “Oh, I am sorry, I misspoke. I misspoke what I meant to say.” No, here was a guy who doubled down.

The difference is that he is doubling down on nonsense and vicious racism. It’s funny. It reminds me of the fact that in 1995 "Politically Incorrect" had been on for a few years and it was doing pretty well. And people started to imitate it and think that they could do it. And in response to that we had to have a contest — we didn’t have to; we chose to — we had a contest, I still have the ads from Rolling Stone magazine, “Politically incorrect or just stupid?” Because people had misinterpreted what I was trying to accomplish with “Politically Incorrect” by saying things that were just stupid.

And that is Donald Trump. Is it politically incorrect?  Of course. But politically incorrect that is stupid is meaningless. Anyone can go anywhere and offend people. I have never in my entire 23 years on television tried to offend people. I don’t say things things just to be provocative. I say what I think [is] the truth, and that turns out to offend people sometimes — and to be proactive. But the basis of it has to be “No, I am just calling this the way it is. I am not doing it to piss people off.”

When did the turning point come for you with Trump — where you realized he wasn’t just brazen, he was dangerous?

When he sued me.

Right, that would have been a wake-up call.

When I had to spend a whole bunch of money to defend the lawsuit from this insane racist in orange greasepaint. I think a lot of people think because they vaguely remember “Oh yeah, that’s right, he sued you” — and of course they don’t remember specifically. Why should they. And I think that they think it was a defamation lawsuit. In other words, a First Amendment issue. And it was not. It was not because, thank God, we live in a country where it is very hard to ever — we have a strong First Amendment unlike England. In England it is almost the opposite; it is very easy to prove [defamation]. In America it is very hard to win a defamation lawsuit; you have to prove malicious intent.

So, yeah, that’s when the worm turned for me on Donald Trump. Before that he was just a buffoonish character. We didn’t pay much attention to him. And I remember during the publicity about the lawsuit, he was saying things like, “Bill Maher hates me because I won’t do his show.” That’s not why. The reason why I started to attack him is because he started to get political. Birtherism was political. He started to talk about the president and his birth certificate. Now, Donald, you are now in my field. I don’t generally go after pop culture targets. That’s for every other show. That’s not my beat. But when he got into my area, he was fair game.

Here’s my last question. You take strong, often controversial stances on issues a lot of the time. I wonder if you’ve ever changed your mind and what’s that like for somebody like you who tends to assert your point of view as strongly as you can?

Oh, absolutely. I love to change my mind. That’s one of the great things of not being a politician. If you are a politician you can never change your mind because then you are a flip-flopper. You have to know exactly what you think when you’re 18 years old and don’t change it when you are 65. That’s a politician.

No! As new information becomes available, sometimes you do change — or maybe you just evolve. I am sure there things I said in 1993 when I was 37 that I would not agree to today. And that’s a good thing. We should be evolving — but not on the First Amendment.