Building a better 'burb: The race to design a sustainable suburbia is also making the suburbs kind of cool

Ecological concerns have led to a long overdue look at the design of suburbs. The results could be revolutionary 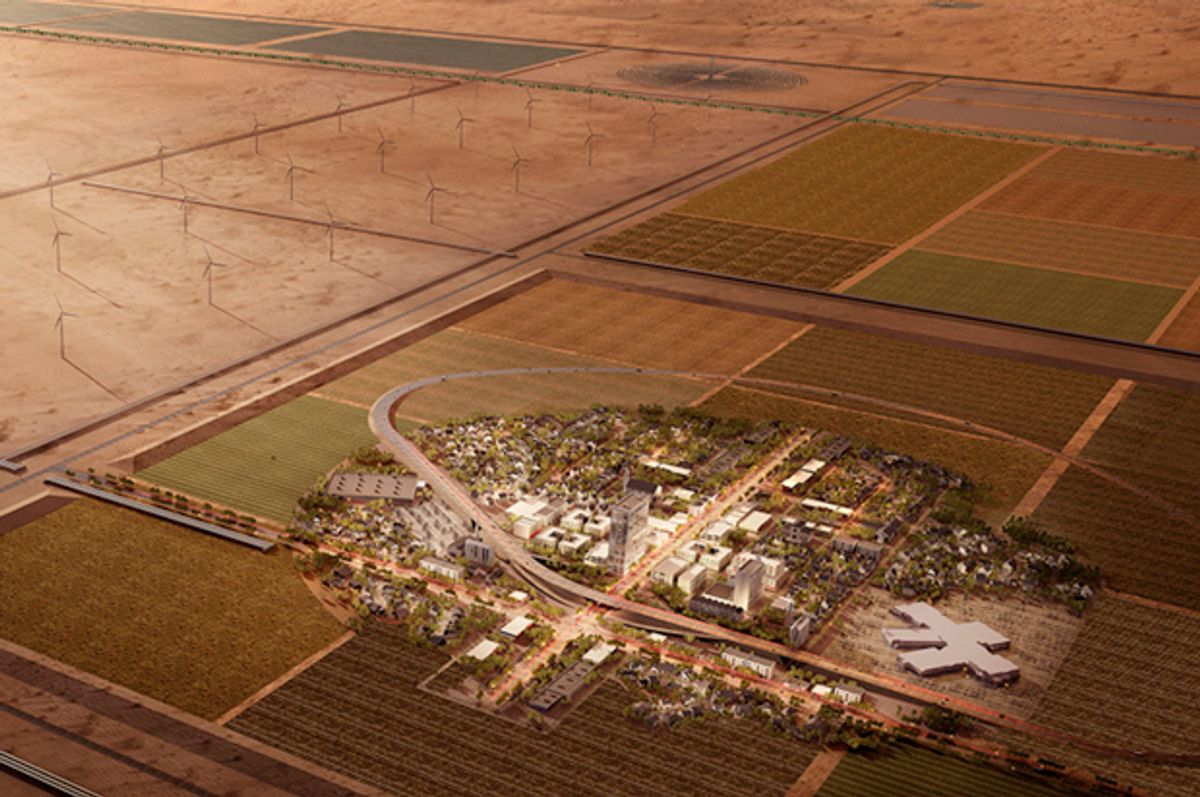 Suburbia is an easy target. But its problems run deeper than disillusioned housewives waking up from their American dreams in cookie-cutter colonials. Suburban living is not environmentally sustainable — at least, not yet. But a new crop of designers, architects and urban planners is envisioning a world in which minivans, manicured lawns and mail carriers are replaced by autonomous cars — aka, suburbia 2.0.

While cities conjure up images of smog clouds and smokestacks, studies show the carbon footprint of a typical suburban home is four times greater than that of an urban dwelling:  Larger households require more heating and cooling. Suburbanites are more likely to own cars than their urban counterparts, and sprawling streets reduce the habitat for animals and decrease biodiversity. All that asphalt — considered “underperforming” by urban planners — allows rainwater to absorb oil and sloppily applied fertilizer before making its way into the ground and eventually the drinking supply.

The majority of academics believe suburbia has a sustainability problem, and you can bet it's about to get worse. Because 75 percent of American jobs exist outside urban centers, 69 percent of U.S. residents already live in suburbia, and population growth in these neighborhoods is on the cusp of a surge. Somehow, despite the major role these areas play — and their pervasiveness — suburbs have been neglected within the urban planning field.

"My profession never wanted to look at them," Ellen Dunham-Jones, director of the urban design program at Georgia Tech, told Salon. "The lack of academic training is shocking. There are architectural studios set in the heart of gritty cities so that students learn to relate buildings to an urban context, and studios set within incredibly pristine natural landscapes, so students learn to relate buildings to nature. But rarely do you see studios set in suburbia, even though this is where most building is taking place."

So we've been left with the soulless and unsustainable monotony of the modern 'burbs. Change, however, is underway. Architects and designers, thwarted by the restrictive zoning and code laws of high-density urban areas, are beginning to view the troubled suburbs as areas of opportunity, where land use is more flexible and therefore better for experimentation. In other words: Neighborhoods known for matchy-matchy mailboxes and carbon-copy cul-de-sac housing could soon become ground zero for sustainable innovation.

This groundswell has its roots in the new urbanism movement that developed in the early 1990s, when a small set of architects and planners felt frustration with suburban development patterns. They began finding ways to make these areas more walkable, incorporating a downtown dynamism typically reserved for city centers. This involved creating sidewalks and repurposing underperforming properties like defunct shopping malls into usable community spaces for art or theater or food.

Often, it meant increasing the density (and decreasing the sprawl) of a neighborhood by building on rooftops and parking lots. In 2009, Dunham-Jones co-authored "Retrofitting Suburbia: Urban Design Solutions for Redesigning Suburbs," which brought attention to an idea that architectural magazines had been ignoring: It's possible to raise our standards for suburban design.

Today, this type of reform is seeing success across the country, and sustainability is increasingly driving the change. Outside of Denver, Zeppelin Development has turned a former industrial area into a growing, mixed-use community with residential homes, a thriving art district and boldly designed office buildings that defy the cubicle-farm standard.

In North Bethesda, Maryland, a 30 minutes' drive outside Washington, D.C., new urbanist architectural planner Glatting Jackson has been hired by private property owners to transform the 400 acres of ugly arterial roads surrounding the town's Metro station into a walkable street grid, while preserving nearby farmland.

And in Portland, Oregon's new urbanist-inspired neighborhood of Orenco Station, half the residents have reported walking to a local business five times a week.

All of this is helping the suburbs' appeal. As suburbs diversify, they are increasingly attracting not just nuclear families but single millennials who appreciate urban-style amenities and smart development.

Enter "The Future of Suburbia," a conference hosted last spring by the Center for Advanced Urbanism at MIT. It was the culmination of a two-year-long research project that will yield the publishing of 1,200-page book "Infinite Suburbia" this fall, authored by 50 experts from around the globe. While new urbanist principles often dictate building vertically, to create smaller spaces with less surface area from which energy can escape, speakers at the conference presented a vision for suburbia that leaves the single-family home in place — albeit equipped with sleek photovoltaic battery packs like Tesla's Powerwall that harness solar energy and connect to a renewable power grid. Imagine entire neighborhoods free of electrical wires, running entirely on stored sunlight.

In future suburbia, this technology might also fuel your autonomous car. Alan M Berger, co-director of the Center for Advanced Urbanism, discussed the potential for driverless vehicles to reduce pavement in suburbia 50 percent. And this isn't just a Jetson-esque fantasy: Ford, Nissan and Tesla plan on releasing a driverless vehicle within the next five years, with Toyota not far behind. And Fiat Chrysler is experimenting with autonomous minivans. The Institute of Electrical and Electronics Engineers predicts these cars, which emit fewer carbon emissions, will make up 75 percent of vehicles on the road by 2040.

Another shift for future suburbia will be centered on the lawn. Gone are the days of perfectly manicured yards and rose bushes as status symbol; coming is the hot new trend of  "rewilding." This landscaping approach incorporates native plants (think merrybells and woodland iris) that require less synthetic fertilizer and irrigation, while providing habitat for birds, insects and other pollinators necessary for protecting our global food supply. It's likely there will also be greater attention paid to the edible estates initiative, which advocates replacing lawns with vegetable gardens.

Some green technologies have already been implemented — like the Natural Organic Recycling Machine, or NORM. One of the largest wastewater treatment and reuse systems in North America, this method for recycling black (toilet) and gray (sink) water is cutting usage by 50 percent for residents of Portland's newest neighborhood, Hassalo on Eighth.

Other green technologies — like an "energy district" that generates electricity for a neighborhood through various renewable sources, including solar and wind power and the chemical element thorium — are being tested. They will get a dry run in the "ghost" suburb known as the Center for Innovation, Testing and Evaluation or CITE. This simulated suburb in the New Mexican desert could house 30,000 people but won't hold any and instead will serve as a lifelike laboratory for researchers. It could be operational as early as 2018.

All the experimentation makes it pretty clear that no one new design standard for suburbia will take hold. Perhaps a heterogeneous approach is best for areas that were never as homogenous as they seemed. "Suburbia is complex — its production, persistence, and expansion can best be explained as a nonlinear set of interrelationships," Berger told Salon. "We cannot talk about one aspect of suburbia without considering how it might affect many other social, economic, political, or ecological factors."

But one thing is clear: Suburbia’s time as a pop-culture punch line might be coming to an end. Or as Art Weingartner warns in the cult classic "The Burbs": “I think the message to psychos, fanatics, murderers, nut cases all over the world is, uh, Do not mess with suburbanites. Because, frankly we're just not gonna take it anymore. Ya know, we're not gonna be content to look after our lawns and wax our cars and paint our houses.”