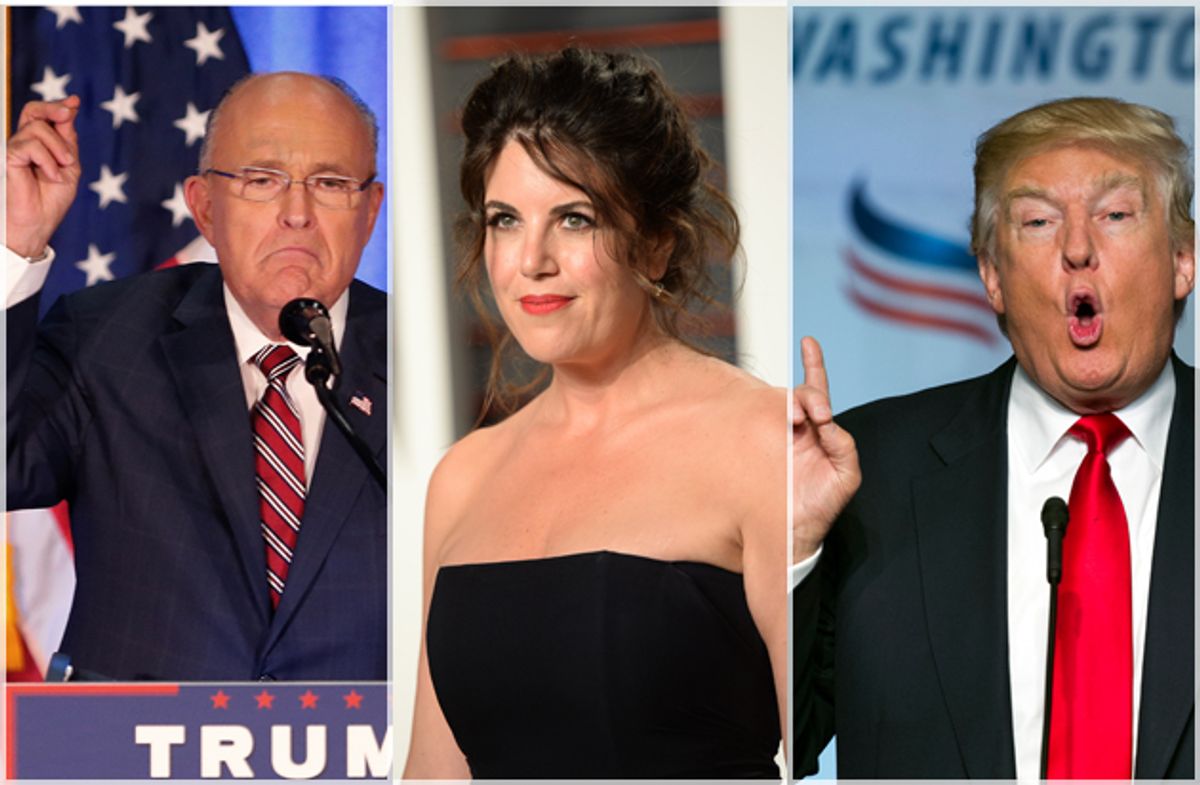 Just when you think this election season can't get any worse, Team Trump has decided to start doing what right-wingers are always accusing feminists of doing: lodging false accusations of sexual abuse, in this case at Bill Clinton. Well, really more at Hillary Clinton, who Donald Trump seems to believe is the person mainly culpable for whatever choices her husband makes about his behavior.

At this point, readers should simply assume this about anything said by anyone from the Trump campaign, but every bit of this rant is a lie. Hillary Clinton did not try to paint Lewinsky as an "insane young woman."

(There are reports that Hillary may have derided Lewinsky using ugly language to a friend, but adults should understand that privately expressing uncharitable thoughts about your husband's mistress is hardly something to get fussed about. Even Lewinsky said, "If that’s the worst thing she said, I should be so lucky.")

But more important, Bill Clinton did not violate Lewinsky. Giuliani did not use the word "rape," but that's the clear implication here. Which is flat-out nonsense because Lewinsky has never, ever accused Clinton of anything even close to that.

For those who are confused about this, the report written by special prosecutor Ken Starr detailed the affair in painstaking detail. Here are relevant passages about their first sexual encounter, for instance:

At one point, Ms. Lewinsky and the President talked alone in the Chief of Staff's office. In the course of flirting with him, she raised her jacket in the back and showed him the straps of her thong underwear, which extended above her pants. . . .

Ms. Lewinsky testified: "We talked briefly and sort of acknowledged that there had been a chemistry that was there before and that we were both attracted to each other and then he asked me if he could kiss me." Ms. Lewinsky said yes. In the windowless hallway adjacent to the study, they kissed. Before returning to her desk, Ms. Lewinsky wrote down her name and telephone number for the President.

To this day, Lewinsky is adamant on this front, writing that "it was a consensual relationship" and that her beef with her former boss and lover "came in the aftermath, when I was made a scapegoat in order to protect his powerful position."

Jaclyn Friedman, a feminist activist and writer, told me over the phone, "There are undeniable power dynamics in that relationship that we can interrogate." She added, "But there is a difference between a relationship in which there’s a power imbalance between two consenting adults and rape."

Friedman has devoted her career to advancing the enthusiastic consent standard, which defines consent based on the presence of a yes — which can be expressed in many ways, both verbally and nonverbally — and not just the absence of a no. The idea is that you only have sex with people you know want to have sex with you, and you do not take ambiguity, silence or apparent indifference as consent.

If you read the Starr report, it's immediately clear that the Clinton-Lewinsky affair meets enthusiastic consent standards: She came on to him. He asked if he could kiss her. She was an eager participant the whole time.

Friedman isn't thrilled about a nearly 50-year-old executive like the president carrying on an affair with a 22-year-old intern and feels we should criticize such relationships "from an ethical position," much in the way we criticize cheating, misrepresenting your intentions or otherwise acting like a cad.

"But there’s a difference between that and a felony violent crime," Friedman emphasized.

Feminists have spent decades trying to educate the public about the realities of rape. It is not about having consensual sex that you later regret, which is something victims are often accused of doing.

When someone like Giuliani collapses the distinction between rape and what happened with Lewinsky, he's reinforcing this false narrative that rape is just "morning after" regret. In doing so, he's suggesting, intentionally or not, that sexual assault is not that big of a deal.

But the reality is that rape is when someone forces another person to have sex. The force is the violation not the sex part. It's a crime of power and violence not just people having illicit sex.

There's an ugly irony and outright hypocrisy to conservatives' posturing about this issue. If we want to talk about what Lewinsky did not consent to, the very tippy-top of the list is having her name and reputation dragged through the mud by the right-wing noise machine that cared nothing for her well-being and saw her only as a weapon with which to attack the Clintons. It was the nationwide humiliation she was subject to in 1998 — two years after her affair with Clinton ended — that left her in a state of suicidal ideation so strong that her mother slept by her bed for fear she would harm herself.

This is why the critical issue related to sexual abuse, harassment and rape is not the "sex" part but the consent part. Harassment, abuse and rape are about weaponizing sex: using it as a tool to degrade and control and hurt women. That cannot — and should not — be confused with situations where women have sex of their own free will for reasons of their own.