Many Native American languages have no written form and few living speakers. Turns out there's an app for that 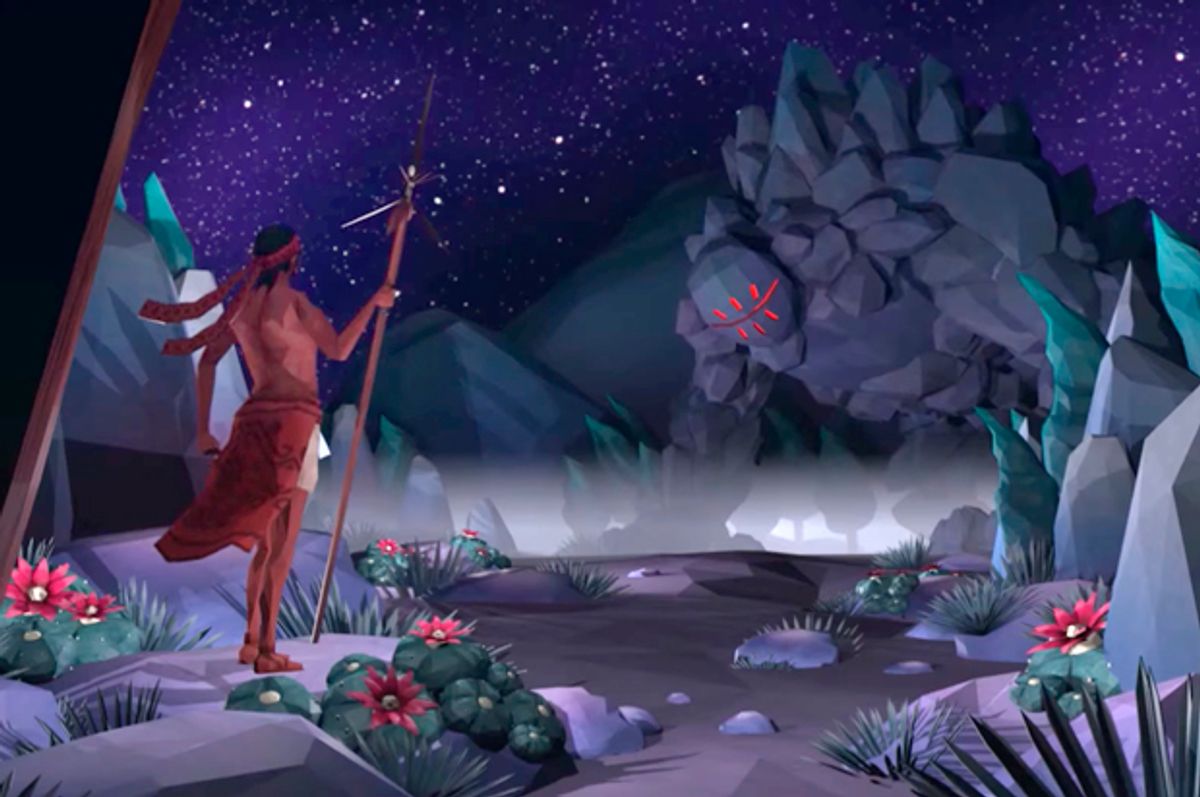 A still from the concept trailer for Mulaka: Origin Tribes. (YouTube/Lienzo)
--

When you're from a sovereign culture within a larger-looming cultural environment — as Native Americans living on and off reservations are — sometimes it's hard to hold on to your language and mores. Children in particular feel the pull of Western things: language, clothes, toys, media and technology. For this reason, it's especially important for Native American children to find language tools in modern media. It is typically the elders or years of research that hold lost answers and dialect.

As Richard Littlebear, president of Montana's Chief Dull Knife College, wrote in a recent research paper, the present generation of fluent speakers of Native languages "needs to honor the preceding generations by strengthening those languages so they remain beyond the seventh generation."

Reached at his office, Dr. Littlebear applauded recent developments in language and culture retention technology. Natives in academia like Littlebear keep a watchful eye on software and other products that can be used in schools to teach lost and diminishing languages.

Nakay Flotte of Harvard University’s Native American Program (HUNAP) wrote to me about a trend in tribal video game and app development that started around 2013.

Navajo Toddler is one such game developed by Tinkr Labs, which for several years has created programming for Natives to learn or maintain their original languages. It was designed for children ages 2 to 9, is available in the Apple App Store and teaches elements of the Navajo language with interactive visual flashcards, audio and gameplay.

Tinkr Labs co-founder Israel Shortman, a member of the Navajo Nation, created Navajo Toddler. Upon its release, he promised that more games would follow. "I saw culture and language not being passed down, and wanted to reach kids in an everyday way," he said. "That meant using technology and sharing information through smartphones." The initial release of the app included three categories: food, numbers and body parts. As they saw images, children could learn the basic words for each category, and audio of the word in Navajo would play simultaneously.

"It has been a unique experience working with the Lakota language -- and a learning process," Shortman told the Falmouth Institute's Spoken First series in 2013. His daughter had been studying the Lakota language, he said, and was learning other indigenous languages as well.

Shortman, a software engineer, recently spoke to the cultural challenges of working with Native American topics, and the need to be sensitive to cultural rules — such as when a tale must only be told at a certain time of year. He is now working with an illustrator cousin on a storytelling app for young children that relates traditional Navajo tales. One such story, called "Coyote and the Stars," is a Navajo legend that is supposed to be told in winter. To address this, the games will be open-source software, but will only show up as available for download in the appropriate season.

Shortman is also putting together a video game called Twin Warriors based on a Navajo birth-story, where twin boys must face a series of otherworldly monsters and ancients to prevail in life. Designed for kids ages 6 to 12, the game will be available in the App Store and for Android in February.

Around the same time Shortman released Navajo Toddler, the first indigenous-owned video game developer and publisher in the United States emerged. Upper One Games in Alaska created a game called Never Alone, about a girl lost in a blizzard who must rely upon the friendship of an Arctic fox. This highlights the Alaskan Native philosophy of interdependence between species, among other cultural ideas.

Farther afield, the Mexican developer Lienzo created a 3-D environment video game called Mulaka -- Origin Tribes, modeling the mythology of the Tarahumara culture. This game was inspired by the stories of the Tarahumara people, and set in their ancestral lands in the northern state of Chihuahua. Through representations of cultural deities and customs, Tarahumara youth can both learn and share their heritage. The Tarahumara have already incorporated some ancient practices into modern life, so it is helpful that the game features narration in the Tarahumara language.

A surge of fonts for Native American languages have been created over the last 10 years or so by various tribes, which can enable the teaching of traditional language, sometimes in nations where all original language has been lost.

The Digohweli Cherokee Unicode font, for example, was designed to be an easy-to-read, all-purpose font. One can use it for web text or print. This is especially remarkable because many Native tribes did not have written language in the past, and some still do not. Starting in 1809, a Cherokee called Sequoyah spent 12 years developing an 86-symbol syllabary (characters representing syllables), for which she was investigated by the tribal chief and a tribal court. Ultimately the court accepted that the written language was a useful innovation.

Today, the Cherokee are one of the largest Native American tribes, as well as one of the wealthiest. This has led to relationships with technology companies that support cultural and language retention efforts. One can access Microsoft Office Suite, Google, Facebook and Wikipedia in Cherokee. Poorer and smaller tribes have not been able to use technology so handily: the UNESCO Atlas of the World's Languages in Danger database lists many Native languages as "critically endangered," "vulnerable" or "extinct," which means that no living person speaks the language fluently.

In Washington state, a type designer named Juliet Shen worked with the Tulalip tribe to create a font for their Lushootseed language. Lushootseed was barely retained at the time, and just five tribal elders still spoke the language. As in many other tribes, Tulalip children were sent to boarding schools in the 1920s and forbidden to speak their language. The idea of creating a usable type font for their language was revolutionary for a people who had not had a predominant spoken-language culture in decades, and had never had a written language.

In Arizona, the Diné people, whose population runs in the hundreds of thousands, have also created a font. Theirs was one of the first Native (Navajo) fonts developed, and it is widely used today for digital communication by both younger and older people eager to learn and use their traditional language.

Back home on my Shinnecock Indian Reservation on Long Island, it has only been in the last 10 years that children have actively been taught pieces of the original Algonquian Shinnecock tongue, which is related to a broad range of Native languages, but which no one could speak fluently, not even elders. Now, as part of the nation's cultural preservation program, toddlers at the recently opened Wuneechanunk Shinnecock Preschool are taught both language elements and cultural practices alongside a traditional Western curriculum.

Josephine Smith is the director of the language and cultural program on the Shinnecock reservation in Southampton, New York. Her office is in the basement of a tribal building that houses senior and after-school children's programs, and her desk is piled high with research papers and curriculum aids -- including a computer where she researches ways to convey the Shinnecock language.

Like many Native American tribes, the Shinnecock want to reclaim our language, much of which was taken away by invaders and missionaries and lost over subsequent generations. Smith says that the Shinnecock have several steps to take internally before we can share our language with others through technology. "We are still in the reclamation process," she says. "I know many tribes are using social media to teach and otherwise share language, and we are going in that direction. First, though, we are working to restore what was taken from us and learn it internally." As an initial step, Smith says she and Shinnecock language researcher Tina Tarrant purchased an internally developed software program called TRAILS, which teaches Shinnecock vocabulary derived from research. Other Algonquian-originating tribes, like the Cree and the Ojibway, already have fonts to proliferate language studies. With further research, patience and the aid new technology, we Shinnecock may eventually have our own as well.