This is not a humblebrag: My kid won’t eat junk food and it’s all my fault

I was determined my son would eat only healthful, homemade foods. And it totally backfired on me 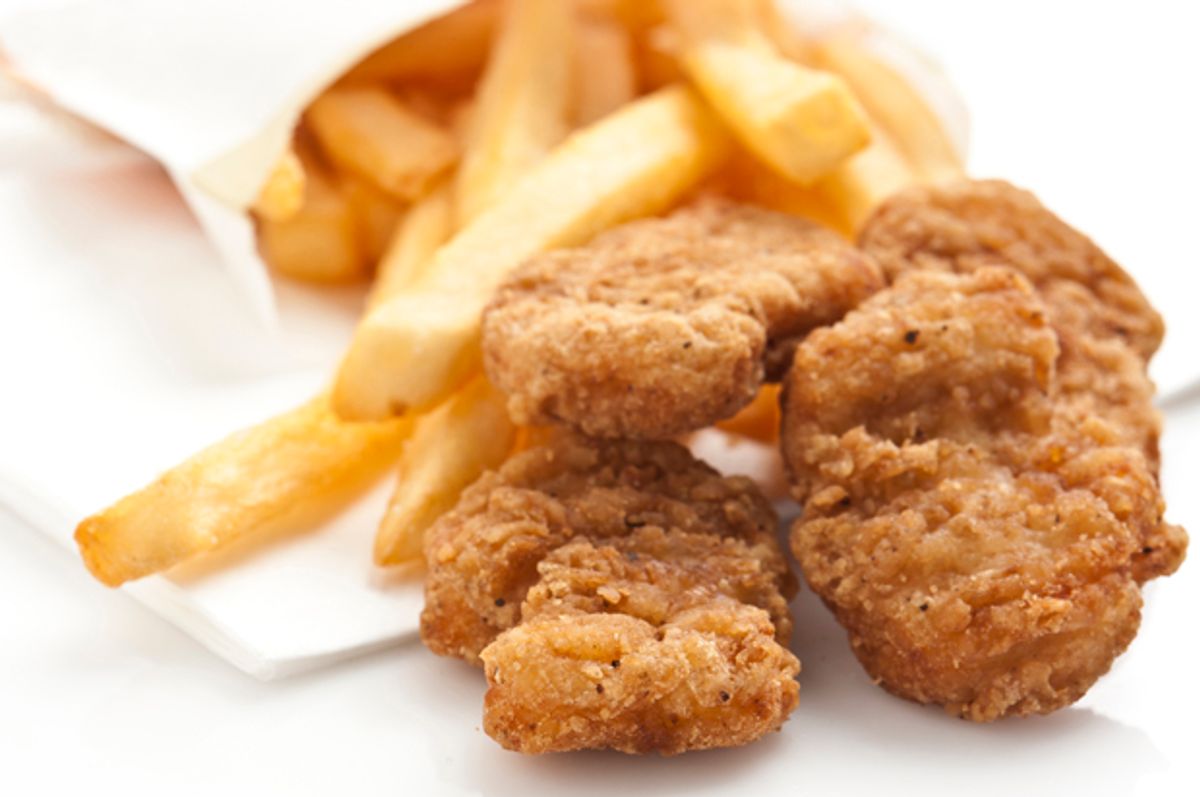 “Chicken nuggets or fish sticks?” I pulled the plastic bags out of the freezer and held them up. By Thursday night after a long day at work during my busy season, I had no shame.

My 5-year-old, Colin (not his real name), looked up from his Legos, strewn across the kitchen floor. “I don’t like those. Can I have salmon?”

I sighed and tossed the bags back in the freezer, knowing I had only myself to blame for his pickiness. When I was pregnant I had bought all the books, read all the blog posts and determined to do it "right." Breast-feeding until he was 2? Check. Making his baby food from scratch? Check.

I knew the statistics on childhood obesity and how bad junk food was for my kid. Once he transitioned to solids, high-fructose corn syrup was the enemy. Friends warned me that I shouldn’t be so strict with slightly patronizing “first-time mom” comments and “you’ll change your mind once he’s born.” If anything, their comments made me only more stubbornly determined to see it through.

A recovering anorexic, I had spent most of my teen years in a battle with a scale or on a treadmill at the gym. At my lowest point I had weighed 95 pounds, which at 5 feet 3 inches tall, was well below a healthy weight. My ex-husband had been a self-described "fat kid," teased and tormented in his teen years until he lost weight during his 20s. We both knew that we had issues around food and agreed that we didn’t want to pass on those issues to our kid. No "you have to clear your plate." No "there are starving children in Africa!" No using food as a reward, like promising him ice cream for cleaning his room.

I think it’s a natural thing: No matter how good your childhood was, you want to improve on it. Anything that bugged you when you were a kid, you’re going to do differently with your own. Until the day you hear the words “I’m not your servant!” coming out of your mouth when your kid refuses to pick up his toys (again). Reality took care of many of our plans, but not those surrounding food. For the first 10 months of his life, I was a stay-at-home mom so it was easier to breast-feed, make meals from scratch and put together healthy snacks.

Even after I went back to work, I would cook healthy dinners while my husband played video games on the couch and claimed to be keeping an eye on Colin. But he never helped with food prep, though he certainly criticized my "bland" palate and "boring" meals. I did all the grocery shopping, meal preparation and the dishes afterward. My husband’s lack of participation extended to every aspect of our marriage. I finally had enough and left him shortly after Colin turned 3.

Divorced, back at work full time and with a toddler, I admitted that I couldn’t make meals from scratch every night. We had been eating out too much, to the point where my kid knew the term “happy hour” because I had figured out how to feed us both on $5 appetizers. Something had to give. On my next grocery run, into the basket went chicken nuggets: all-natural and 100 percent chicken breast, of course. I still had standards.

The next night I laid them out on the baking sheet, put them in the oven for 10 minutes and served them up, sure that Colin would gobble them down.

He wouldn’t eat them.

Not even when I squeezed a hefty dollop of ketchup (his favorite) onto the plate. He ate the microwave-in-a-bag green beans, two cups worth, and turned up his nose at the protein. I sliced up some cheese for him and ate the nuggets myself.

The next week I tried fish sticks, with the same results. Hamburger patties? Nope. Meals in a bag? He spit them out. In my quest to make sure he would eat all his fruits and vegetables, I had turned my kid into a different kind of picky eater: He’ll eat kale chips, but not super-easy, working-mom-needs-a-break food.

As I made yet another grilled cheese sandwich with carrot sticks one night — the only easy food he would eat — I admitted to myself that I should have fed him more junk food when he was younger. I hadn’t planned on being a single mom when he was born. I hadn’t planned on being the sole person responsible for feeding us. And I had unknowingly made my life harder in the future by being so dogmatic about food choices in the past.

Now five years into parenthood, the only advice I have for first-timers is this: Give yourself permission to change your mind. Circumstances change. Your family’s needs can change. Other than always using a car seat and looking both ways before crossing the street, there are very few parenting decisions that will irrevocably screw up your kid. The occasional bag of chips or trip through the drive-through isn’t on that list.

We've found compromises. He’ll eat hummus and pita chips, and I’ve decided to call that good on protein. I have upped my budget for eating out and accepted that I’m going to have to pay an extra $4 for a measly cup of broccoli with the kids’ meal. If I complain about his pickiness on Facebook, I'm accused of humblebragging, so I keep my mouth shut and we muddle along.

If I'd had a crystal ball when he was younger, I wouldn't have been so strict with food choices. You don't know where you're going to be in five years, so do yourself a favor. Instead of viewing parenting choices as right or wrong, ask yourself: Does this work for us now? Will this make my life harder in the future? And don't beat yourself up if dinner comes out of the microwave every once in a while.