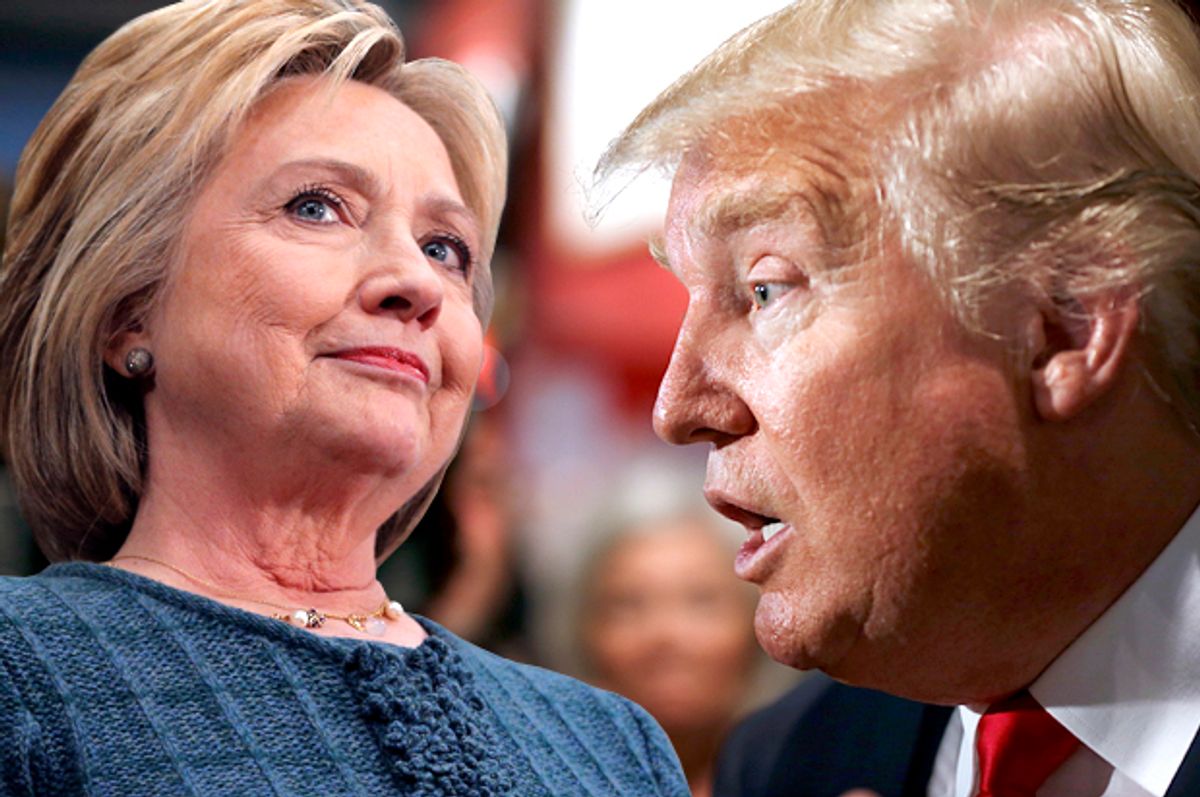 For all their carping about political correctness, Republican presidential nominee Donald Trump's coalition of disaffected and delusional voters have demonstrated themselves to be the most terrified and fragile people on the planet. The frailty of the white ego, the inbred terror of the conservative and the nostalgia of the right-wing baby boomer have invaded and nearly conquered American politics.

Throughout the depressing circus of the presidential election, everyone has treated the Trump voter as parents would treat a child crying during a horror movie or screaming after waking up from a nightmare. Rather than trying to persuade the kid that there are no monsters underneath the bed or that goblins don’t live the closet, the parents simply embrace the infant, and provide reassurance that everything is going to be OK. We'll make America great again!

The 2016 presidential race is less about issues than about an emotional conflict at the core of American culture. It is the battle between courage and cowardice. The multiethnic and multicultural constituency backing Democrat Hillary Clinton is comfortable with change, enthusiastic about diversity and democracy, and mature enough to realize that as the world’s nations become more interconnected, the United States will have to function as one wealthy, powerful nation integrated into arrangements alongside many other nations, large and small.

The Trump coalition, virtually all of it being composed of white people, is in a state of panic over immigration, trade deals, Muslims, crime, the evil intentions of the “globalists” and protest movements aimed at accountability for police brutality. Trump’s voters see change and want to run home to Daddy or, in this case, to a phony billionaire who offers imaginary solutions to manufactured problems, built on his transparent ignorance and pathological propensity for lying.

Many critics have rightfully indicted Trump’s default mechanism of giving simple answers to complex problems, such as his hilarious promise to not only “knock out ISIS” but also to “do it fast.” The gullibility of the Trump voter is certainly a worrisome harbinger for American political debate, but the real problem runs much deeper.

In 1999, sociologist Barry Glassner indicted the mass media and general public for collusion in the creation of “The Culture of Fear,” as his book is called. “Why are so many fears in the air, and so many of them unfounded?” he asked before pointing out that Americans take “every happy ending and write a new disaster story,” while “compounding fears beyond all reason.” Through assiduous documentation, Glassner then showed that the various “crises” striking fear in the hearts of Americans were not crises at all. Crime, drugs and political correctness, to name three still-relevant phantoms, will not bring the country closer to Armageddon, no matter how many media commentators shriek about them or how many convulsions the voters experience.

Now many psychologists and journalists have returned to the phrase of W.H. Auden, calling the contemporary American moment “the age of anxiety.” That's because 1 of every 9 Americans takes an antidepressant drug, and high percentages are paranoid and anxious about nearly everything imaginable, seeing threats around every corner. Illegal immigration is at a 13-year low. Undocumented immigrants comprise just 3.5 percent of the American population, but Trump is going to build a wall to keep the monsters away from our beds.

The likelihood that an American will die in a terrorist attack is roughly 1 in 90 million, but “our country is under attack.” Poverty is at its lowest rate since 1968, and the U.S. has enjoyed 78 consecutive months of job growth. But according to Trump logic, America is a “Third World country” in desperate need of someone to “bring the jobs back.”

Facts can’t compete with feelings. Data and evidence are now meaningless in comparison to the cowardice at the core of Trump supporters, who increasingly see the world in simplistic, Manichaean terms. Everything is a disaster because the “global elites,” hiding in the shadows, hatching their diabolical schemes, have “rigged” the system against those who favor Trump. They are not responsible for themselves or their own problems. Immigrants, Muslims and the Chinese make for easy scapegoats, and if anything goes wrong, it is easy to circle back to conspiracy as explanation.

Trump did not really make an incoherent mess of himself in his debate against the much smarter, more mature and better prepared Hillary Clinton: The microphone was “defective” and the moderator’s questions were “unfair.”

When Trump presents America as the setting of a postapocalyptic thriller, where cannibals and killers roam the streets and scary Asian or Arab villains extinguish innocent lives from far off palaces, he does so not because it resembles reality but because it resonates in the shrinking hearts of his voters. According to several studies, Trump speaks at a fifth-grade level. He seems incapable of anything more sophisticated. But his juvenile vocabulary offers stylistic enhancement to the worldview he sells, and his constituents embrace that. It is the worldview of the frightened child.

The stakes of the election are profoundly high because democratic governance requires a self-assured public of informed people making rational choices and willing to accept the burden of participatory citizenship. Democracy, in other words, is for adults. It also requires courage. Fear incites a fight-or-flight response, and fearful Americans have taken flight into the arms of an authoritarian — a paternalistic figure who absolves them of responsibility by blaming immigrants and others and who eases their burden by promising to “fix it like no one else.”

The child-grown-old versus adult dichotomy lies at the heart of British author Christopher Jackson's brilliant new book on the presidential race, "The Fragile Democracy." There is always a risk of losing relevance by the second when addressing current affairs, but Jackson has succeeded in the elevation of his analysis to philosophy by anchoring it in the virtues of the Enlightenment — the very virtues that the Trump campaign has placed under attack. Jackson’s comparison of America's turmoil with the recent Brexit referendum in his homeland demonstrates that it is not only Americans who are “suspicious of complexity” or “cruel” in their desire to simplify the world so that it will conform to their ignorance.

Jackson believes that the current presidential race is about “enlightenment versus chaos.” What is lost on Trump supporters is that as authoritarians attempt to make the world simpler, they make it more chaotic. No one — not a theocratic dictator nor a megalomaniacal mogul — can control the events of the world and reduce the complications of life. As authoritarians try to exert their pull, the world slips further out of their grasp and they are forced to take more drastic measures. Such measures inevitably result in misery and catastrophe.

“Reason is still the best lamp against darkness and difficulty in the world,” Jackson argued. The celebration of reason is the adult perspective that scaffolds democratic governance. The Trump coalition rejects reason, caring little for the consequences.

Democratic presidential nominee Hillary Clinton is far from a perfect candidate, but she is an adult and as such vastly preferable to Trump. More important, the constituency that her victory would empower is much more conducive to the long-term survival of American democracy than the freakish collection of white nationalists, conspiracy theorists and ignorant tribalists that Trump has unleashed.

For all the contempt that Trump deserves, he has provided the invaluable if troublesome service of exposing certain unpleasant truths. There is now no doubt that large numbers of Americans, with a childlike resistance to diversity and democracy, are proud of their prejudice and willing to act on it. They hope to inject it, like a carcinogen, into the lungs of the body politic, eventually choking it.

Clinton's election, if it happens, will not cause the anti-democratic forces on the march to turn around or reform themselves. For all the reasons to remain hopeful (the expansion of liberty and protection to more groups of Americans, the progressive orientation of most younger people, the increased focus on disparities of race and gender), our democracy remains fragile, largely due to the cowardly urge of many Americans to escape their lives and responsibilities. It has absorbed worse blows and prevailed in tougher times, but its survival demands vigilance — and adult supervision.