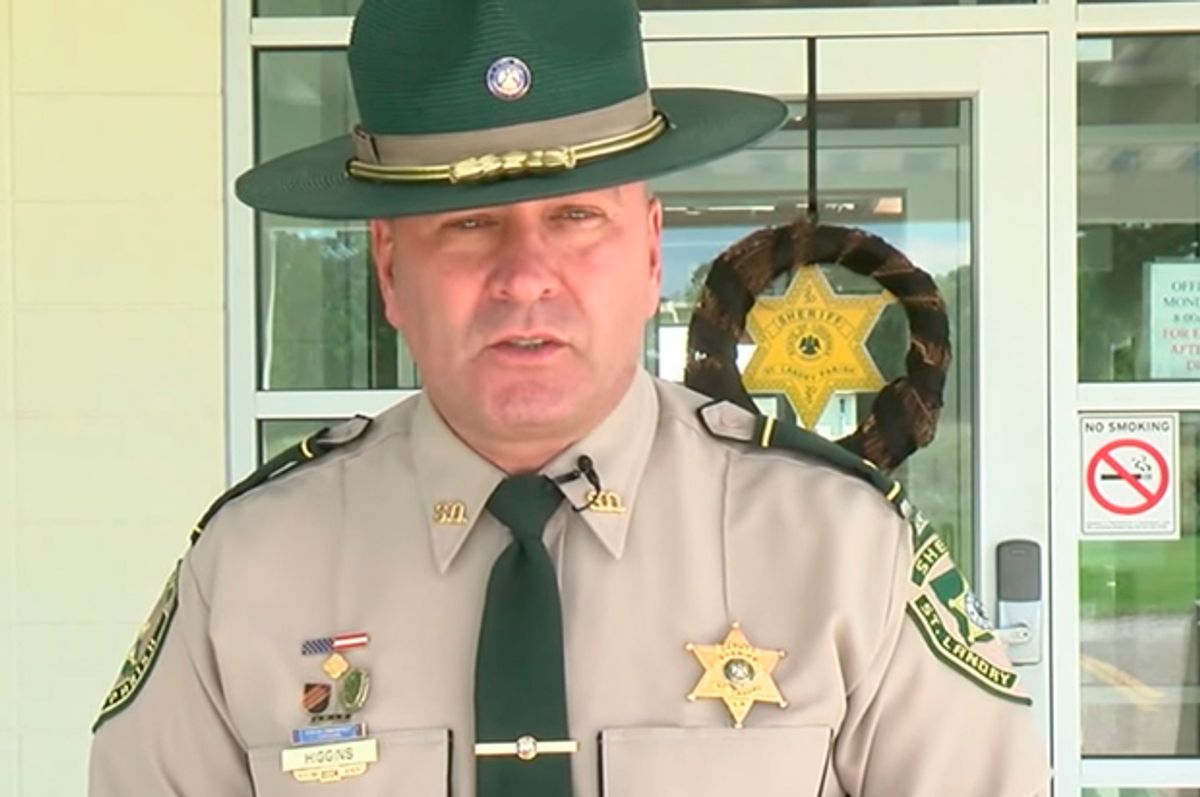 Clay Higgins, a former police captain and public information officer in the sheriff’s department of Louisiana’s St. Landry Parish, earned his nickname "The Cajun John Wayne" by making a series of videos encouraging criminals to turn themselves in. The settings and substance differed, but the schtick was consistent: Dressed in his uniform, Higgins would recount the basics of the crime then try to persuade perpetrators to surrender, intimidating them with a barking drill sergeant-like delivery and a disdain borrowed from Dirty Harry.

“We’re going to identify you, arrest you, and put you in a small cell,” Higgins said in one July 2015 video, made after a local restaurant named Stelly’s Market was broken into. “After that, I’m going to have a cheeseburger here with fries and a Coke and leave a nice tip for the waitress,” Higgins added, standing outside Stelly’s with his hands on his belt. “Meanwhile your next meal will be served through a small hole in a cell door.” That video has gotten more than 2 million views on YouTube and millions more as it made the rounds on national talk shows. Dozens of his other videos have topped 1 million on YouTube and Facebook.

“We won’t have to wait on lab results [for DNA tests] ’cause you’re on St. Landry Crime Stoppers tonight,” Higgins said, referring to the segment on local TV in which his videos would air. “Congratulations son, I’m about to make you famous.”

Few criminals gained notoriety, but the 53-year-old Higgins did as he sought the spotlight. His Internet fame led to on-air appearances on the "Today Show" and "Fox & Friends" and a profile on "CBS This Morning" in September 2015 — all of which added to his celebrity in his hometown of Opelousas and the surrounding Cajun country.

Higgins decided to parlay his name recognition into political office, and announced in May that he was running for Congress as a Donald Trump-style Republican in Louisiana’s 3rd House District. As of the latest polling on June 14, Higgins was at 17.5 percent, which put him in second place in a seven-person field. If the election had been held last week, Higgins would be in a one-on-one runoff with Public Service Commissioner Scott Angelle, a more moderate Republican, and it would not be implausible for the forces that have driven this wild election cycle to propel Higgins into office.

That may or may not be true today. Suddenly, Higgins’ political ambitions are imperiled by the release of emails and sheriff’s department memos that Salon obtained from a public records request. They reveal a number of curious tidbits — ruminations on how “sex and youth sells” in Hollywood and the fact that Higgins, a former car salesman, believes he’s better looking in person than on TV. More, however, these emails reveal a public servant obsessed with making quick buck after quick buck on the taxpayer's dime. He repeatedly broke sheriff's department rules, using his job in law enforcement to launch a series of lucrative schemes, and has done little to show he would not do the same with a seat in Congress.

After he became famous in early 2015, Higgins began exploiting his position in the sheriff’s department to sell t-shirts and mugs, negotiate paid talk show appearances, paid speeches, paid advertisements, and even a reality television show, Higgins’ emails reveal. He did all of this on his government email account during work hours without the permission or knowledge of his supervisors. Higgins also appears to have attempted to conceal his earnings from the IRS in order to avoid wage garnishment for unpaid taxes. Whether those actions constitute tax fraud is unclear.

“I get paid 1500 for a television production and a grand for a radio production, plus 150 an hour travel time and an additional grand for a photo session,” Higgins wrote in an email to Tony Morrow, a lawyer in Lafayette, Louisiana, who he had agreed to film television ads for. “That’s a total of 10 grand for the eight productions.”

But Higgins added an unusual request. “I prefer to get paid in cash,” he wrote. “I have my reasons for preferring cash, reasons best discussed, if need be, in person.”

Higgins did not report this money in financial disclosure forms for his campaign.

In other emails to his accountant this January, Higgins revealed that he was having $656 garnished from his wages by the IRS every month for back taxes and he wanted to pay a lower amount. This appears to be the reason Higgins requested cash payments — to make his on-paper earnings appear as low as possible and to keep the IRS from getting a piece of this side income. The St. Landry Parish clerk of court confirmed to Salon that Higgins had IRS liens for more than $44 thousand in back taxes, although their exact status today was unclear.

“Captain Higgins has a professional tax firm who prepares his taxes,” Comeaux said. “Secondary employment and cash remuneration, reported on 1099, is common for most police officers.” But that doesn’t explain why Higgins would request to be paid in cash for secret reasons.

When Higgins resigned from the sheriff’s department in February, he said in a press conference that it was because he could no longer follow his sheriff’s orders. He’d just released a video, widely criticized as racist, in which he referred to wanted men in an alleged gang as “animals” and “heathens.”

But in an internal memo, obtained by Salon via a public records request along with the Higgins emails, St. Landry Parish Sheriff Bobby Guidroz clarified the real reasons for Higgins’ departure to the rest of the department. “Clay Higgins formed a personal business venture to raise money by selling mugs, t-shirts, and other trinkets using department badge and uniform. All of which are against department policy,” Guidroz wrote. “I reined Higgins in.”

Higgins’ emails, which contained contract negotiations for his clothing company, confirm this. “Traffic will stabilize and increase… as well as retail sites, all pushed by my public appearances,” Higgins wrote in one email about t-shirt sales, directly linking his police job to his personal money-making ventures.

He also negotiated paid speaking appearances with other police departments. In one email, Higgins discussed his request for a speaker’s fee that included shopping money for his wife and part of the fuel for his friend’s private plane.

“3250 might sound like a lot but it’s really not,” Higgins wrote in a different email. “My [Law Enforcement] only fee basically replaces what I could earn anyway plus compensation for travel time, wear and tear on my [car], and ownership of the video.”

In his memo to the sheriff’s department, Guidoz wrote that “Higgins needed to take his own advice… ‘don’t be disrespectful, follow the law,’" or in his case, follow departmental policy.

In August 2015, Higgins also debated whether to accept an appearance on "The Nightly Show with Larry Wilmore," which has since been cancelled by Comedy Central. “There’s no money on the table, just a free trip to NY, but I’ve been to NY,” Higgins wrote to his financial advisor.

“This guy is a huge Liberal Democrat,” his advisor, Andrew Ahrens, wrote back in reference to Wilmore. “To be blunt this guy is a real piece of shit.”

"Fox & Friends" was off the table too. “The last time i did Fix (sic) and Friends, the little Italian looking pretty boy wanted to keep asking me how many cheeseburgers did I eat at Stellys,” Higgins wrote, in an apparent reference to Brian Kilmeade.

Perhaps not surprising, considering his video prowess and professed admiration for Donald Trump, Higgins had dreams of launching a reality TV show, which he imagined would be entitled "American Justice." The premise was simple if preposterous: Higgins would drop in on SWAT teams around the country, filming himself arresting alleged criminals with those teams and then compelling the perps to confess their crimes through an on-camera interrogation.

“Our project could feature… me actually involved as an operator during the arrest, flown out to wherever, assigned a spot on the arrest team... making the arrest, and having interaction with the suspect one-on-one,” he wrote in email to a talent manager at Entertainment One, a Toronto-based talent agency.

Although Higgins believed himself capable of nailing perps through the sheer force of his personality, in the internal memo, Sheriff Guidroz questioned Higgins’ abilities, writing “Higgins’ five or six years as a patrolman (not supervisor), doesn’t give him the inherit (sic) right to claim to be a crime fighter.”

In his emails, Higgins had attached a short draft for a rough cut of an "American Justice" pilot. “Because I’m a police officer, I can actively engage in manhunts,” he says in the video. “We’ll offer the suspects a chance at redemption, to express regret and seek a new path by talking directly to me.”

When Salon reached out to Comeaux for further comment on Higgins’ emails, he replied with a statement from Higgins’ campaign attorney, Craig Engle. “I’ve taken a look at it, and it all looks fine to me,” said Engle. (The Angelle campaign refused to comment on Higgins' emails.)

When reached via email, Sheriff Guidroz had a very different perspective. “I told him to complete a 'secondary employment request form' prior to engaging in any outside of the department money making venture,” Guidroz wrote to Salon. “Higgins DID NOT submit a 'secondary employment request form!' I did not authorize him to do appear on t-shirts, mugs or any other trinkets.”

“In fact, it upset me to the point that I expressed dissatisfaction in his insubordination,” Guidroz added.

Beyond the comments given to Salon, Higgins and his campaign have apparently not publicly commented on the controversy since news of Higgins’ emails was first reported on Wednesday by an NBC affiliate in Lafayette, Louisiana (the station obtained the documents via their own public records request).

On Thursday, Lafayette’s IND Monthly also reported that Higgins had resigned from a previous police job for unnecessary use of force.

Through this all, the Cajun John Wayne has continued to campaign. On Thursday, he called for police to arrest more illegal immigrants. Writing on Facebook, Higgins tried to sound like his old intimidating self: “An illegal laborer would much rather load up his unregistered car and make it back to Mexico WITH his cash and belongings, as opposed to risk being arrested.”