President Obama draws "a straight line" from Sarah Palin to Donald Trump: The GOP "just seems to get worse”

From 2008 to 2016, Obama argued, there has been a "shift in the center of gravity for the Republican Party” 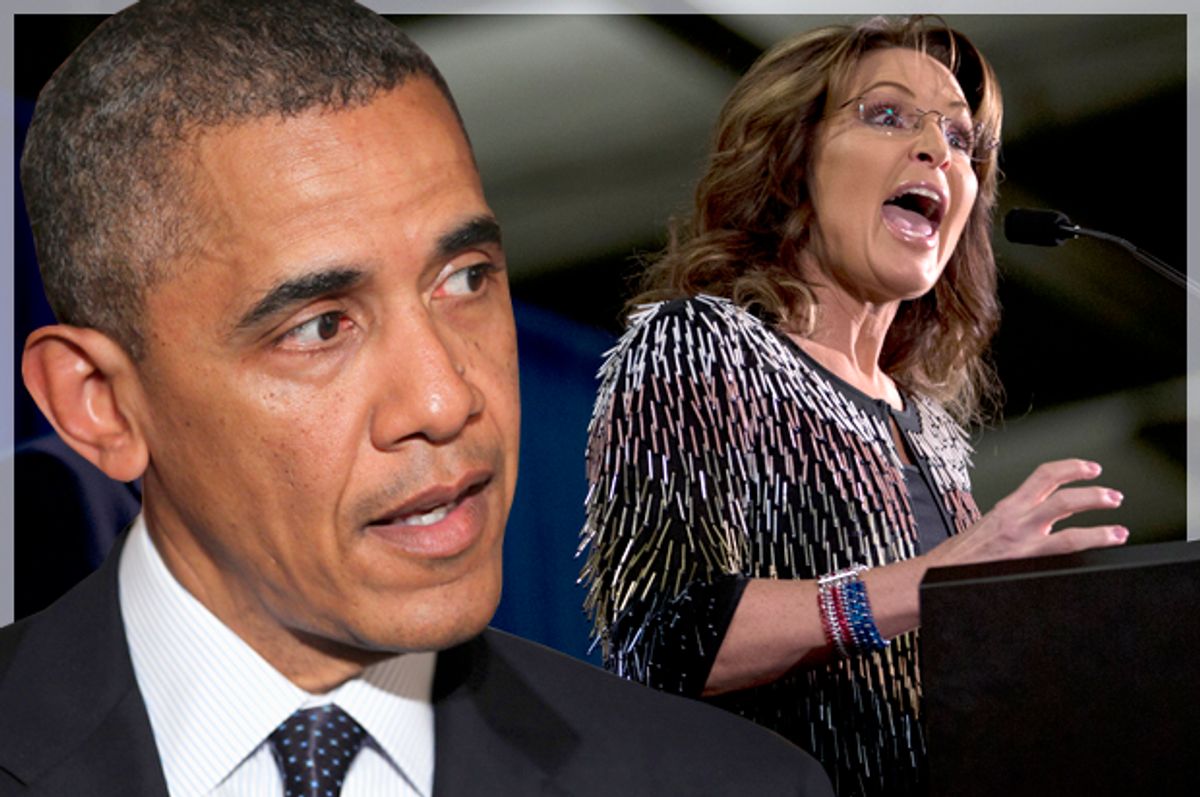 “I see a straight line from the announcement of Sarah Palin as the vice presidential nominee to what we see today in Donald Trump,” President Obama said in a wide-ranging interview with New York magazine published Sunday night. “The emergence of the Freedom Caucus, the tea party, and the shift in the center of gravity for the Republican Party.”

“The moods that I think Sarah Palin had captured during the election increasingly were representative of the Republican activist base, its core,” Obama said while reflecting on his first year in office. “It might not have been representative of Republicans across the country, but it meant that [House Republican leader] John Boehner or [then-Senate Minority Leader] Mitch McConnell had to worry about that mood inside their party that felt that, ‘No, we shouldn’t cooperate with Obama, we shouldn’t cooperate with Democrats’ — that it represents compromise, weakness, and that the broader character of America is at stake, regardless of whatever policy arguments might be made.”

Obama said that conservative members of Congress in safe Republican districts have been unwilling to compromise with him because they knew "all"of their constituents were "watching Fox News and listening to Rush [Limbaugh]."

He said he found it “really strange” that “there was big cheering by Rush Limbaugh and various Republican factions that America had lost the Olympic bid.”

As that oppositionist "mood" gained steam, the more difficult deal-making became. "If they cooperated with me," the president said of the opposition party, "then that would validate our efforts. If they were able to maintain uniform opposition to whatever I proposed, that would send a signal to the public of gridlock, dysfunction, and that would help them win seats in the midterms."

"And they're going to pay a price if they’re seen as being too cozy with a Democratic president," he told the magazine.

To make his case, the president recalled the case of New Jersey Gov. Chris Christie, whose 2012 presidential run was "basically over before it started" because he dared to embrace President Obama following Hurricane Sandy.

"Whether that changes, I think, will depend in part on the outcome of this election, but it's also going to depend on the degree of self-reflection inside the Republican Party," he said. "There have been at least a couple of other times that I've said confidently that the fever is going to have to break, but it just seems to get worse."