The Clinton BS Files: Who is Chelsea Clinton's real dad? A mystery spun out of nothing 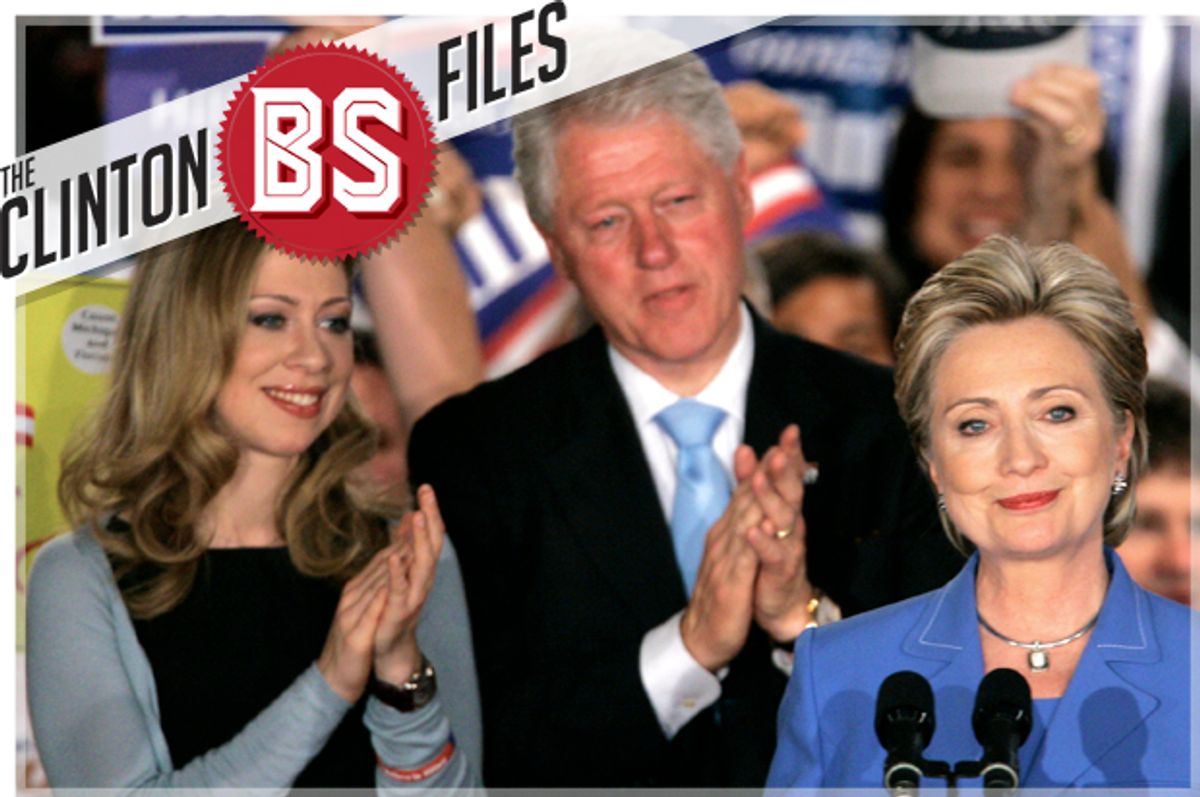 During last week's debate, Hillary Clinton closed out the evening by talking about Donald Trump's misogyny. She reminded audiences that he has called women "pigs, slobs and dogs" and that he thought Alicia Machado, a former Miss Universe, was so fat he was justified in calling her "Miss Piggy."

Trump's spluttering response was, "I was going to say something extremely rough to Hillary, to her family, and I said to myself, 'I can’t do it. I just can’t do it. It’s inappropriate. It’s not nice.'"

In case there was any doubt about what that "something" was, Trump clarified after the debate that he was talking about Bill Clinton's infidelities. Why her husband's past adulteries should disqualify Hillary Clinton from pointing out that Trump is a misogynist is hard for most people to grok, but the conspiracy-theory-loving right apparently thinks this is a killer argument.

How such people get there requires a lot of pretzel logic, so bear with me: They start with a false premise, that feminism requires that no woman ever say an uncharitable thing about another woman. (This has never actually been a requirement of feminism, or how could we criticize women like Sarah Palin or Phyllis Schlafly?) Then they zero in on the fact that Clinton said not-nice things on occasion about her husband's mistresses. They then pretend to be all appalled about what a terrible sexist she is, and claim she can no longer allowed to say anything about real sexism ever again.

Whew, OK, as Clinton herself might say. But there's a deeper story beyond the surface ridiculousness of expecting women to be gracious to their husband's mistresses, which is an expectation never likely to be applied to men. This Hillary-Clinton-is-the-real-sexist gambit comes from the twisted brain of right-wing ratfucker and close Trump friend Roger Stone, who published a book called "The Clintons' War on Women" last year.

The book is a wonderland of bullshit about the Clintons, including conspiracy theories about Waco and about Hillary Clinton's relationship to Huma Abedin. But there's also a lengthy digression into the topic of this week's Clinton BS File -- who the "real" father of Chelsea Clinton is.

The obvious answer, to normal people, is "Bill Clinton." He is her legal father and the husband of her mother and, if you have eyeballs in your skull, you can see that Chelsea looks quite a bit like her father.

But on the paranoid right, accepting that Bill and Hillary Clinton have ever had sex with each other is on the top-10 list of Thou Shalt Nots. It's an article of faith in certain right-wing circles that the Clintons have a passionless marriage of convenience and that they may have sex with all sorts of people, but never with each other.

Saturday night, Trump himself hat-tipped this conspiracy theory, telling a Pennsylvania crowd, “I don’t even think she’s loyal to Bill, you want to know the truth. And really, folks, really, why should she be, right?”

It's a fun theory for those trying to demonize the Clintons, but the existence of Chelsea, who looks for all the world like an exact combination of her two parents, throws a wrench into attempts to deny that the Clintons are essentially a normal nuclear family.

So the fringe right has offered an alternative: A man named Webb Hubbell.

"So, if Hillary was not having sex with Bill Clinton, then who was she having sex with?" reads one typical website. "Answer: Webb Hubbell, Vince Foster and a string of lesbian lovers."

Hubbell came to the attention of the nutty right during the era when they were trying to turn Whitewater, a real estate deal turned sour, into a national scandal for the Clintons. In the seemingly endless and partisan investigations of the Clintons' business dealings in Arkansas, it was discovered that Hubbell, a friend of the Clintons, had overcharged clients and illegally taken money from the Rose Law Firm when he and Hillary Clinton both worked there. This discovery eventually led to Hubbell's conviction and the loss of his job at the Department of Justice.

For years afterwards, federal prosecutor Kenneth Starr kept investigating and leveling charges against Hubbell, in a fruitless bid to pressure Hubbell to cough up evidence of illegal behavior on the part of the Clintons. That ended in 1999, when Starr's fishing expedition came to a merciful end.

Almost none of this comes up when you do a Google search for Hubbell's name, however. Instead, what you get is a bunch of lurid conspiracy theories about how Hubbell is Chelsea Clinton's real father.

Why Hubbell? As best as I can figure, it goes back to a passage from Hillary Clinton's famous book "It Takes a Village":

The conspiracy theorists are probably right that the "burly ex-football player" is Hubbell, who was playing for the Arkansas Razorbacks when they defeated Georgia at the Sugar Bowl in 1969.

In this passage, Clinton also gently teases her husband and other "fathers-to-be" for sitting "silently, arms crossed defensively" in Lamaze classes. At some point, some right-wing nut must have glommed onto the difference between Bill Clinton's wariness about babies and Hubbell's apparent enthusiasm and decided that Hubbell must be the father.

The possibility that a man could just like babies, even if they aren't his, is apparently beyond the grasp of the fringe-right imagination.

(The way that right-wing nuts whipsaw between describing Hillary Clinton as a sexless shrew and portraying her as a femme fatale is but one of the many oddities of Clinton conspiracy-theory fanaticism as a subculture.)

Of course, this particular conspiracy theory runs right up against the fact that any fool can see that Chelsea Clinton looks like her father. In an Aug. 21 speech caught by Media Matters, Stone was at it again:

Now Chelsea, their daughter, who is, as I say in this book ["The Clintons’ War on Women"], actually the daughter of Webb Hubbell and Hillary Clinton -- you can see this based on a series of photographs. Hillary admits in her own book that a large football player-sized man taught her the proper way to hold a baby. Who could that be? And if you look at her, she doesn’t look anything like Bill. She looks just like her daddy, despite four plastic surgeries, the youngest one when she’s only 18. What 18-year-old gets plastic surgery unless you’re trying to, I don’t know, thin out the lips and make you look less like your daddy.

Stone has no real evidence for these claims, of course, but that's never stopped him before.

As with many right-wing conspiracy theories, it's tempting to wave this off as a matter of nutty people who have too much time on their hands. But the main purveyor of this stuff, Stone, is rightfully considered a top advisor to the Republican presidential nominee.

Stone was pushed out as a Trump campaign official last year, but he continues to head up one of the biggest pro-Trump PACs. Reports suggest that he plays a major role in advising the campaign -- he was apparently part of the reason Trump hired Paul Manafort, who ran the campaign over the summer — and that he speaks with Trump on the regular. The whole strategy of using Bill Clinton's infidelities -- along with insinuations about darker, sexualized conspiracy theories -- as a way to distract voters from Trump's actual sexism is exactly the sort of politics Stone specializes in. And it's precisely the mentality driving this year's Republican campaign.