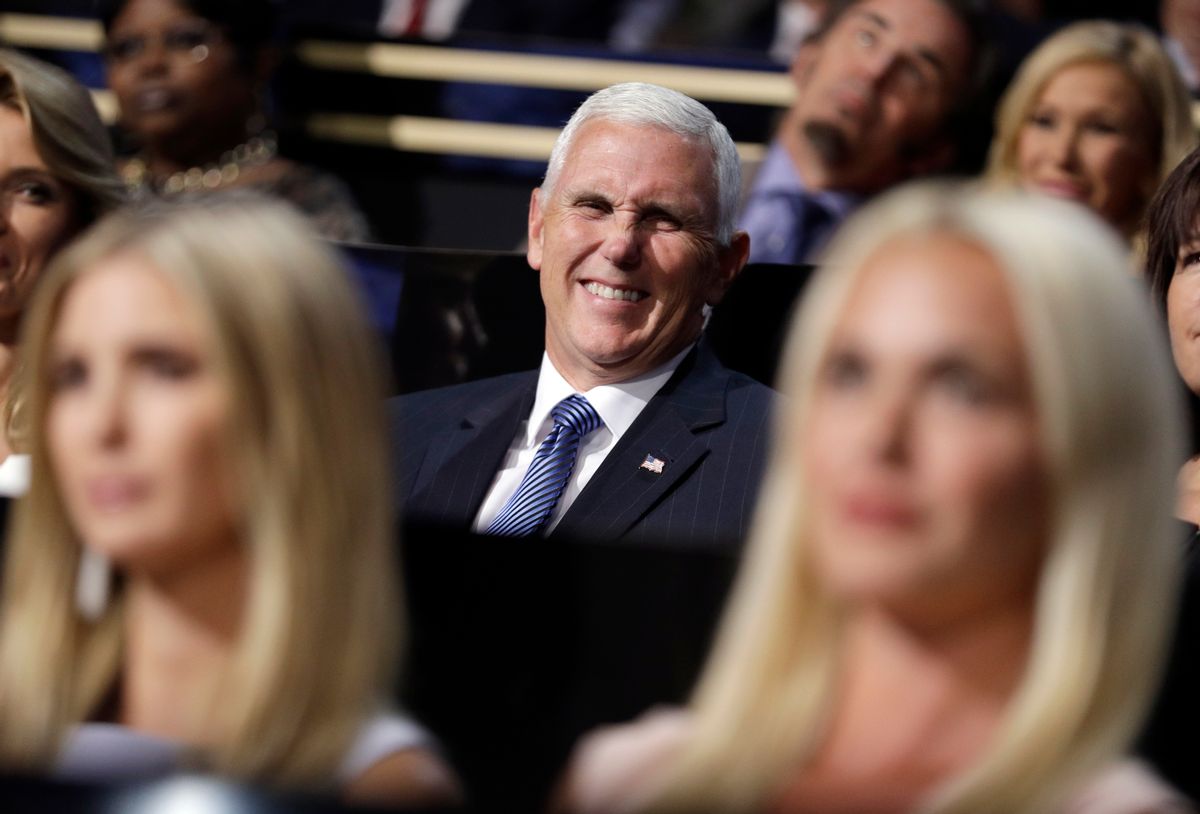 Vice Presidential nominee Gov. Mike Pence of Indiana smiles as he sits during the second day session of the Republican National Convention in Cleveland, (AP)
--

When Republican Mike Pence and Democrat Tim Kaine take the stage Tuesday night for the 2016 vice presidential debate, there are a few things we hope that debate moderator Elaine Quijano of CBS News will ask Pence to account for.

While promoted as the sane member of a GOP ticket headed by the likes of Donald Trump, Pence, who is governor of Indiana, uses a demeanor of reasonableness to offset some mighty extreme views on the role of women, climate change, creationism and Social Security, to name a few. The vice presidential candidates meet only once before a national television audience, so this forum will likely be an introduction of these candidates to most voters.

When Republican Mike Pence and Democrat Tim Kaine take the stage Tuesday night for the 2016 vice presidential debate, there are a few things we hope that debate moderator Elaine Quijano of CBS News will ask Pence to account for.

While promoted as the sane member of a GOP ticket headed by the likes of Donald Trump, Pence, who is governor of Indiana, uses a demeanor of reasonableness to offset some mighty extreme views on the role of women, climate change, creationism and Social Security, to name a few. The vice presidential candidates meet only once before a national television audience, so this forum will likely be an introduction of these candidates to most voters.

Kaine, the U.S. senator from the Commonwealth of Virginia, is pretty much your basic liberal; not much by way of surprise in his background. But Pence, a convert to hard-core right-wing Protestant evangelicalism, embraces a range of positions far afield of the views of mainstream voters—views he doesn’t flaunt on the campaign trail. He’s a favorite of donors to the Koch network, as well as Tim Phillips, president of Americans for Prosperity, the ground-organizing group founded by Charles and David Koch, the billionaire brothers at the helm of Koch Industries. (According to Follow the Money, David Koch has spent some $300,000 on Pence’s political campaigns.) Pence has also enjoyed the largess of Erik Prince, founder of the mercenary firm once known as Blackwater (since renamed Academi), from whom he received thousands of dollars in donations for his congressional campaigns.

If voters are to know what they’re getting when they pull the lever on November 8, Quijano will need to dig deep into Pence’s record. Here a few topics that would prove most enlightening to the electorate.

1. Climate change – Gov. Pence, on the issue of climate change, you’ve long been what the Muncie Star Press, one of your home-state newspapers, describes as “aclimate change denier.” In 2000, you described the contribution to greenhouse gases to a changing climate as “a myth,” and as late as 2014, you told Chuck Toddon NBC’s “Meet the Press” that you didn’t think the science of climate change and the effect of human activities on the environment had not been “resolved.”Your position is in line with that of your donors, Charles and David Koch, and members of their donor network. Yet last week, you seemed to back off from your long-held position, telling CNN, and I quote, “Well, look, there's no question that ... the activities that take place in this country and in countries around the world have some impact on the environment and some impact on climate." We know that your running mate has struggled to justify his 2012 tweet in which he called climate change “a hoax invented by the Chinese.” Have you changed your position simply to offset that of Donald Trump?

2. Creationism – Mr. Governor, you’ve long been a proponent of the creationist notion of “intelligent design” as the source of human existence, even suggesting in a congressional floor speech in 2002, when you served in the House of Representatives, that school children be taught alternatives to the theory of evolution. Here’s what you said, according to the Congressional Record: “[L]et us demand

that educators around America teach evolution not as fact, but as theory, and an interesting theory to boot. But let us also bring into the minds of all of our children all of the theories about the unknowable…” In an era when the United States strains to turn out the numbers of scientists and engineers we need to compete in the global economy, do you still believe that tax dollars should be used to support religion-based, non-scientific explanations of natural phenomena?

What do you have to say to the tens of thousands of women military veterans of the wars in Iraq and Afghanistan about your regard for their service or valor?

4. Mandatory pregnancy – In March, Governor Pence, you signed what is perhaps the most restrictive anti-abortion bill in the nation, one that not only included substantial obstacles to a woman securing her constitutional right to terminate a pregnancy, but which also barred abortion in the case of a woman who would otherwise have to give birth to a severely disabled child—perhaps one who would suffer terribly. When signing that bill, which a federal judge struck down, you said your reason for doing so was “that a society can be judged by how it deals with its most vulnerable — the aged, the infirm, the disabled and the unborn.” Yet Indiana has the sixth highest infant mortality rate in the nation, and a very low level of health-care spending for those who have no other option. Are these infants and their mothers not among our most vulnerable?

5. The value of a life– In some of Indiana’s poorest counties, as you know, governor, HIV and Hepatitis C have flourished thanks to the opioid epidemic. Addicts share the needles with which they inject the drugs, spreading the diseases throughout the community. In one of those counties, because you had prevailed upon the legislature to defund Planned Parenthood clinics, the one clinic that provided testing for these viruses was shuttered. When it became apparent that you had an HIV problem in your state because of needle-sharing, you dragged your feet for months before approving a clean-needle program, saying that you had” to pray on it”—despite scientific evidence that clean-needle harm-reduction programs save lives. On what aspect of this life-saving program did you have to pray?

6.  Privatizing Social Security– On Capitol Hill and at events sponsored by the Koch-founded group, Americans for Prosperity, you have long made the case for privatizing Social Security, which was founded as way for all Americans to have skin in the game of providing a humane life for the very senior citizens you have described as “our most vulnerable.” Studies have shown that privatization bills that you supported in Congress would actually have left Social Security underfunded rather than provide the cure for insolvency that you and privatization advocates tout. Why not simply raise the income cap, requiring well-off people to pay into Social Security on more of their income?

7. Whose religious freedom? – Governor Pence, last year you made waves throughout the nation when you signed a so-called “religious freedom” bill that would have allowed private enterprises that serve the public to deny their goods and services to LGBTQ people if they claimed that to do so violated their religious consciences. The resulting nationwide outcry seems to have knocked you back a bit, since you quickly responded by signing—in private—amendments to the bill that contained language barring discrimination. This earned you the scorn of some of your fellow evangelicals, most notably Family Research Council President Tony Perkins, who said that Donald Trump could have made a much better choice than you if he wanted to win the votes of Christians. So, tell our viewers just where you stand on the right of private businesses to discriminate against customers. Would you have been O.K. with it had you not been confronted with such backlash?