As Donald Trump releases an ad with Ivanka, we must look at actions — including a run-in with a woman reporter 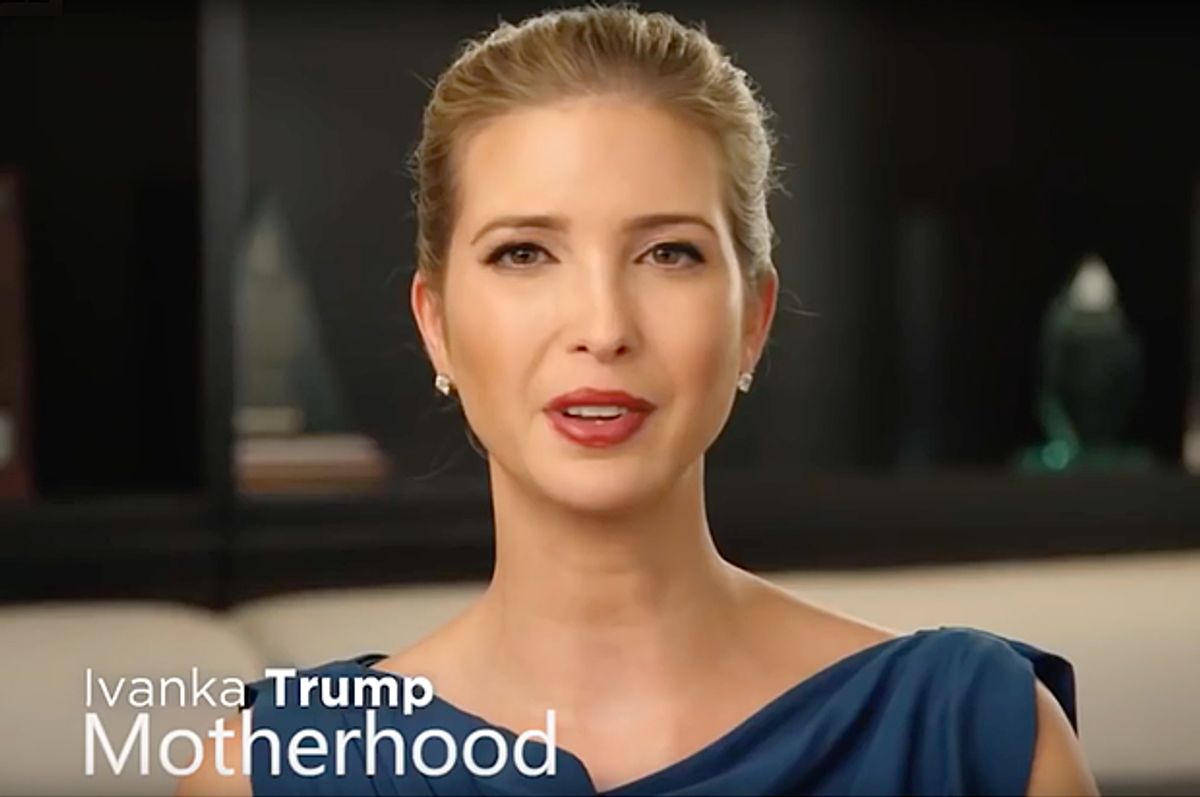 Ivanka Trump is starring in a new ad for her father, imploring women to ignore their instincts and support a man whose shows a blatant disregard for women. She implores working women to support a man who insulted a breastfeeding employee, calling her “disgusting” for requesting to pump breast milk.

Ivanka also tells women that her father will magically create better working conditions for women — even though the Bernie-esque policies she touts in the ad have been tried in Europe and have backfired — there are fewer European women CEOs than American ones. These sort of liberal policies — which Ivanka also spoke about at the GOP convention in Cleveland — are also why many informed conservative women have looked at the Trump campaign and decided to lean out.

The golden child of the multi-bankrupted maganate also ignores the elephant in the room: how her father’s misogyny directed at her went beyond his normal creepiness into borderline incest — this is a man who hinted that he’d like to date his own daughter.

So it’s no wonder that Donald Trump is lagging far behind Hillary Clinton among women voters — especially college-educated ones. And just when you don’t think Donald Trump can be any more repugnant in his treatment of women, he outdoes himself. This past week brings fresh evidence: Sure, there’s the childish, 3 a.m. Twitter rant about the former Miss Universe that you've heard about. But there’s also another lesser-known but no less troubling report of a physical exchange between Trump and a young female reporter, Alexi McCammond, associate news editor for the Millennial women’s site Bustle.

McCammond reports  that immediately after the first presidential debate at Hofstra University, she was in the spin room, holding out her cell phone that was already recording video as Donald Trump was walking down.

“I hold it up, with my question ‘How would you respond to young women who are nervous about voting for you?’ and he grabbed my hand and said ‘Put that down,’ referring to my cellphone, and pushed my hand away,” McCammond told Salon. In no world is that behavior acceptable.

McCammond reports that while she was at Hofstra University, she and her colleague arrived at 10 a.m, well before the 9 p.m. debate, so they roved the campus speaking to students. Overwhelmingly, she said that young women she spoke with were frightened about how Trump would treat women, minorities and the LGBTQ community if elected and that they adamantly did not want to see Donald Trump become president. Nationwide data reflects this: a McClatchy poll found Trump has the support a mere 9 percent of Americans below age 30 — which, shockingly enough, puts him in fourth place — Clinton polled at 41 percent, Libertarian Nominee Gary Johnson at 23 percent and Jill Stein at 16 percent.

“I think it really is a lack of experience,” McCammond continued. “Donald Trump is not ready to be president. I think he proved that at the debate and immediately after. And I think that what’s most fascinating is his supporters who have since on Twitter been like ‘It was your fault, you put your phone in his face, it didn’t hurt you, it doesn’t matter’ as if all those things justify his actions.”

Maybe there's more than misogyny at work — maybe his actions also reflected his disdain for journalists. Trump’s most recent attacks on the news media is reflective of his bigger problems with freedom of the press: He’s called for restricting free speech laws and he praises Vladimir Putin, a leader with no respect for a free press. This should concern all voters — especially conservatives who claim to believe in limited government.

As a conservative who is #NeverHillary, I’m often accused of aiding and abetting the Clinton cause by also being #NeverTrump. Admittedly, I am predisposed to want to vote for Trump. There were moments of the Hofstra debate that were music to my ears — namely, when Trump began speaking about cutting taxes. I want to believe that if he wins the White House he would surround himself by people like economist Stephen Moore, who understands the importance of free enterprise and innovation as forces for lifting people out of poverty.

Yet the music was incredibly short lived and quickly drowned out by juvenile, egotistical, small-minded tirades. So I cannot in good conscience vote for either candidate. By maintaining my #NeverTrump position, I am holding my ground against Trump’s shocking disrespect for women. I am also #NeverMisogyny — I do not want the White House to turn into a petri dish where we harvest a poisonous culture that disempowers and marginalizes women. We have been treated as second class in this country (and are still in many parts of the world) for centuries, and a Trump presidency would revive this despicable discrimination.

McCammond and others have also pointed out that after Hofstra, Trump willingly came into the spin room — typically the sign of a candidate on weaker footing — while Clinton did not. And as subsequent polls show, Trump is on the defensive. If he keeps up his "Miss Piggy" nonsense in the second debate, he’ll fall further into his pit of prejudice.