House Republicans have a woman problem: GOP leadership is at risk of being all white and all male in next Congress 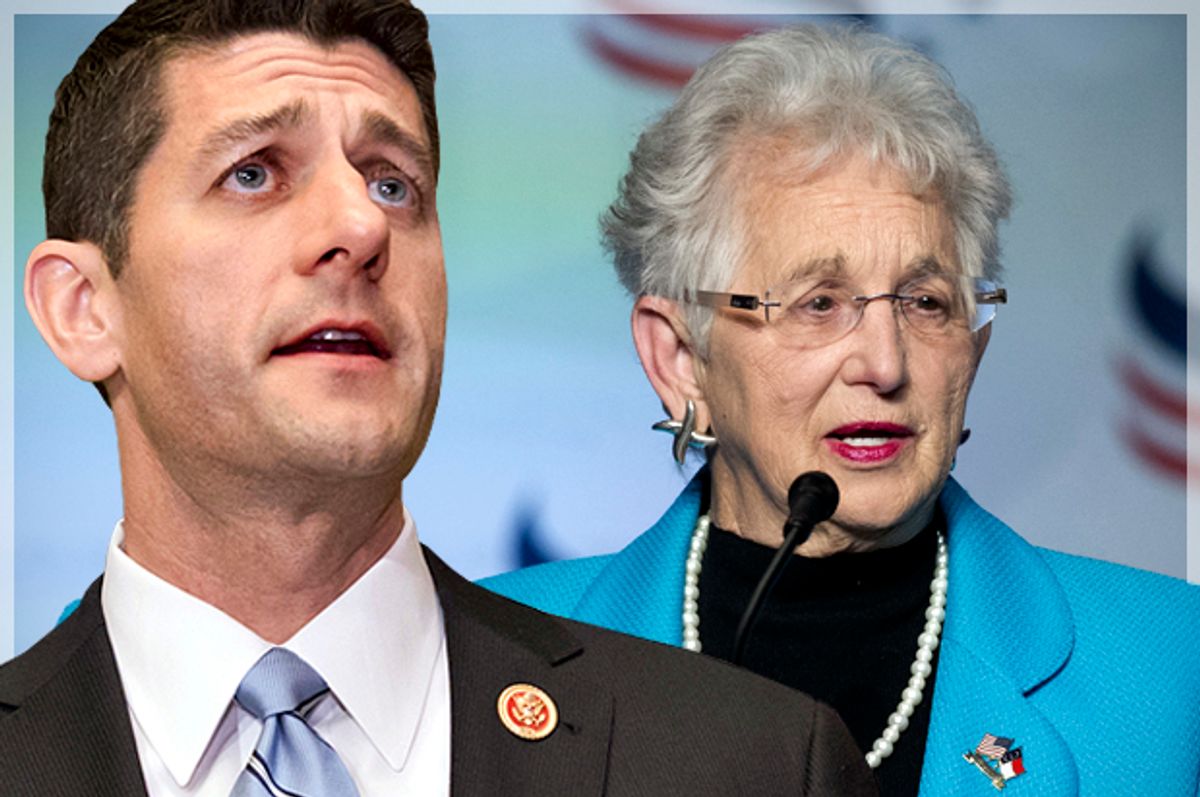 Unlike their Democratic counterparts, Republican women elected to federal office have struggled to make lasting gains in leadership positions over the past decade.

For more than a decade, the number of Republican women in Congress has remained roughly stagnant. The share of Democratic women — now nearly 33 percent — has continued to climb, while the Republican female share has leveled off since hitting 10 percent during the mid-2000s. Currently there are just 22 women in the Republican caucus of the U.S. House of Representatives. Democrats have 62 women in the House.

With the retirement of two female representatives and another congresswoman's losing her primary fight to a Republican man (nearly 14 percent of the women in the Republican House Conference), Politico Magazine recently noted exactly how unrepresentative House Republicans have become in 2016:

So far this year, Republicans have nominated women in just 26 of the 308 congressional districts that have held primaries. That’s a mere 8 percent — and it’s in line with the current makeup of the House Republican Conference, which is 91 percent male and 9 percent female.

In Congress, Republicans can boast only two additional female lawmakers and virtually no other women in high-ranking leadership roles compared with 2006. Of the 21 House committees in the Republican-controlled House, the only one currently chaired by a woman is the low-profile House Administration Committee. And Candice Miller, the seven-term congresswoman from Michigan who chairs the committee, is set to retire at the end of this term.

And House Republicans should hardly take solace in the fact that a woman is likely to replace another retiring congresswoman, Wyoming’s Cynthia Lummis, as it was undoubtedly Liz Cheney’s familial connection to the old boys’ club of the Grand Old Party that won her the primary for the state’s lone congressional seat.

Furthermore, only one GOP woman is currently in the running for the five openings for chairs of the House Energy and Commerce, Education and the Workforce, Appropriations, Veterans’ Affairs and Administration committees. The Hill reported on Tuesday that North Carolina’s Virginia Foxx is the only Republican woman in the House officially in the running to chair a committee.

It didn’t have to be this way. Similar to the GOP’s 2012 autopsy that identified the party’s weak appeal among voters of color and millennials, there was a failed 2014 effort to recruit more Republican women for Congress just a few years ago.

"Honestly, we just don’t have that many in the field at this point in time," Missouri Rep. Ann Wagner, the current finance chair of the National Republican Congressional Committee, said earlier this summer.