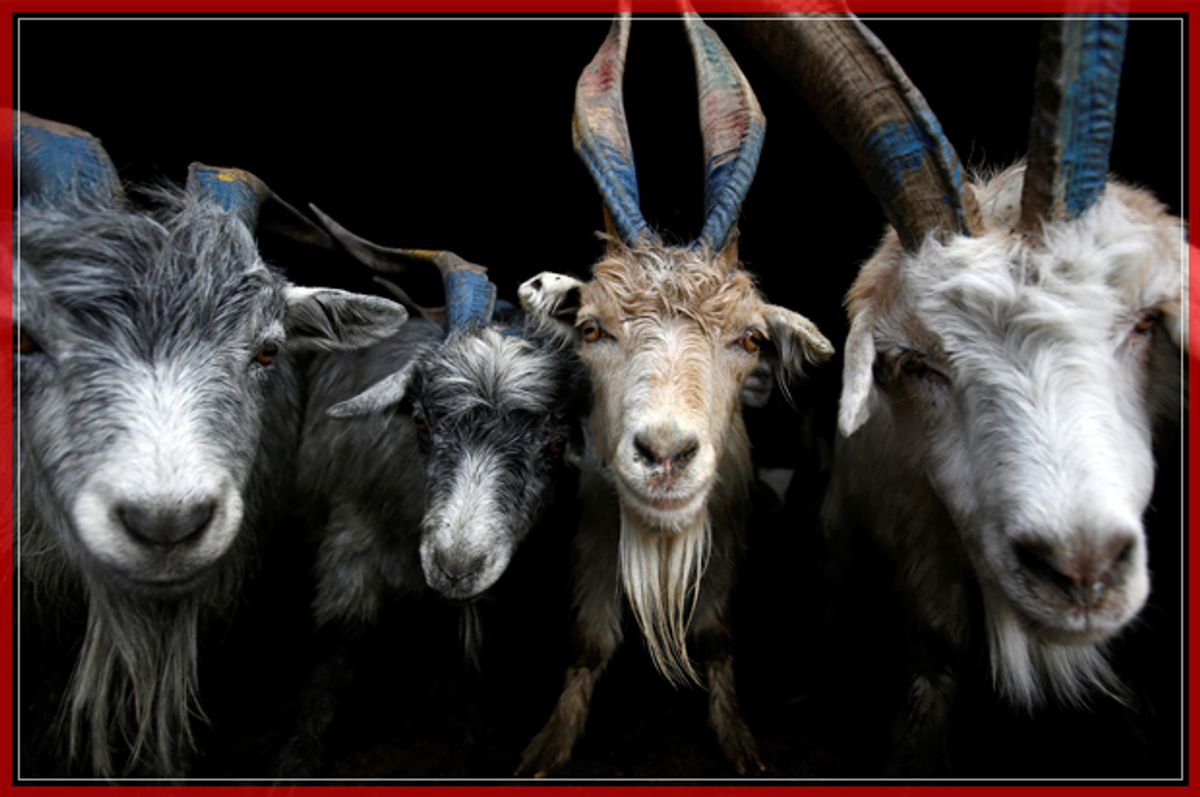 Qayyarah, Iraq   Bram Janssen/AP
Oil fields have been burning for a month “We should have kept the oil,” Trump can often be heard yelling, a nod
to the failed invasion of Iraq. The war created a vacuum that led to
the rise of ISIS, the terrorist group that is now burning oil fields
in towns like Qayyarah, Iraq, seen in the photo above. Iraq will be a
tense topic of debate in the final month of the election. Photos like
this remind Americans of the grave conditions in the Middle East.

Kathmandu, Nepal   Navesh Chitrakar/Reuters
Goats wait to get unloaded from a vehicle at a livestock market during Dashain How much better would American Horror Story: My Roanoke Nightmare be if instead of Kathy “The Butcher with a Ridiculous Accent” Bates and Lady Gaga the pig-heart eating sex-nymph, Matt and Shelby’s reenactors were being stalked by a band of demonic goats? Obviously, these goats would have to be sex-crazed ghost-goats from the 1500s that crave human flesh so Ryan Murphy doesn’t have a fit. Questions about the refugee crisis played a major role in the Vice Presidential debate. And this week, the European Union and Afghanistan came to an agreement to return an unlimited number of failed asylum seekers to Afghanistan. But consider the implications of returning people such as these Hazara protesters to a place that is not safe for them. This is the true heart of the immigration and refugee admission debate. At this point, Americans have the luxury of speaking about refugees as abstract “others”. Europe, however, does not. For these museum-goers wearing VR headsets, Jon Rafman's interactive
art installation features creepy humanoid figures in an otherworldly grid
universe. For anyone looking at this photo, though, it is an art
installation featuring humans sitting on a white winding serpent-bench
in a yellow room, moving their heads around seemingly at random.