"Luke Cage" and the racial empathy gap: "Why do they talk about being black all the time?"

If white viewers dislike the Marvel show's focus on black characters, it's because they're used to being catered to 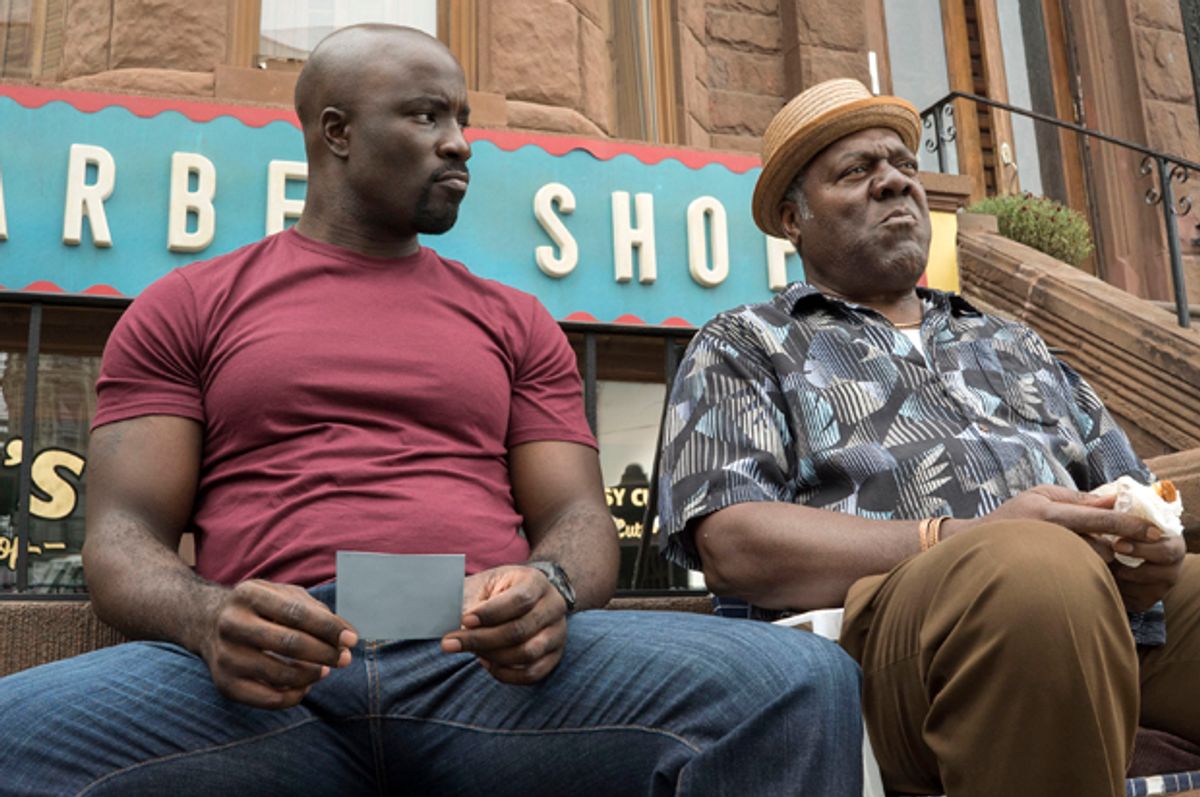 Netflix dropped Marvel's “Luke Cage” last Friday, and it's the streaming platform’s only superhero feature to date that stars a nonwhite lead. Luke Cage (played by Mike Colter) is a man gifted with extraordinary super strength, which gives him the ability to pick up a washing machine or withstand a round of bullets.

Created by Cheo Hodari Coker (“Ray Donovan”), the show is based on the classic Marvel series, and the first of the current Marvel Cinematic Universe shows to feature a black man at the center. The comic books first hit stores in 1972 under the name “Luke Cage, Hero for Hire.” It would later be amended to “Luke Cage, Power Man,” intended to cash in on the success of blaxploitation films like “Black Caesar” and “Coffy.” In “Sweet Sweetback’s Baadasssss Song,” Melvin Van Peebles played Sweetback, another indestructible man of color.

Although the show has received mostly positive reviews from critics, there’s one demographic that’s less jazzed about Marvel’s ode to black strength and resilience: white people. On Twitter, some viewers of the Caucasian persuasion took “Luke Cage” to task for its portrayal of white people — namely because the show doesn’t portray them at all. Featuring a deep bench of talented actors — including Alfre Woodard (“12 Years a Slave”), Rosario Dawson (“Grindhouse”) and Mahershala Ali (“Moonlight”) — only two white characters recur often enough to appear in six or more episodes of the freshman season.

Angered by the show's predominantly black cast, some white viewers took to Twitter to label it “racist.” Here’s a sample:

Even a "woke" white viewer had to confront her own initial discomfort with the show, which she then shared on Twitter:

The very thing that makes “Luke Cage” distinctive is precisely what upsets these viewers: It’s unapologetically black. Coker, who previously wrote the screenplay for the Biggie Smalls biopic “Notorious,” fills nearly every inch of his frame with black faces — particularly in scenes of the crowded Harlem nightclub where Cage works. Its commitment to blackness astutely flips the script on the racial status quo in Hollywood, where people of color are forced to the margins of the screen or rendered invisible. To watch “Luke Cage” is to be reminded that a great many films, even in 2016, don’t contain a single black character, let alone one as fully fleshed out as Cage.

The unbearable whiteness of the industry reared its ugly head recently during an interview with Tim Burton, in which the director appeared to be having what Twitter was having. Burton, responding to the lack of diversity in his new film “Miss Peregrine’s Home for Peculiar Children,” threw up his hands at the need to cast people of color. “I remember back when I was a child watching ‘The Brady Bunch’ and they started to get all politically correct,” the goth auteur said. “Like, OK, let’s have an Asian child and a black.”

The movie, starring Eva Green (“Penny Dreadful”) as an avian headmistress who watches over a group of children gifted with unusual abilities, finds Burton up to his usual twee, Hot Topic-styled antics. “Miss Peregrine,” however, is notable for one unfortunate piece of trivia: It’s the first film in the director’s 30-year career to feature a person of color in a lead role and the character is a cannibalistic villain. Samuel L. Jackson (“Pulp Fiction”) plays Barron, who eats the eyes of children in a quest to achieve eternal life. Jackson appeared in a similar role last year in Matthew Vaughn’s surprise hit “Kingsman: The Secret Service.” His billionaire megalomaniac in “Kingsman,” though, had a taste for McDonald's, not Justin Bieber fans.

While it’s easy to single out Burton, whose movies are whiter than a three-day-old corpse, he’s one of many directors who almost never casts people of color. Woody Allen hasn’t featured a black man in a consequential part since Chiwetel Ejiofor in “Melinda and Melinda,” which was released in 2004. He’s directed 12 films since then. Filmmakers ranging from the Coen brothers to Wes Anderson have been called out for the lack of black faces in their expansive ensembles. A Funny or Die video spotlighted the Coens’ “No Country for Old Men,” “The Big Lebowski,” “Fargo,” “The Man Who Wasn’t There,” and “A Serious Man” for featuring “almost no black people.”

A popular video series from Dylan Marron (“Welcome to Night Vale”) made a similar point: If you counted up all the lines spoken by people of color in a major motion picture — examples range from “American Hustle” and “The Lord of the Rings” to the “Harry Potter” movies — the total usually adds up to less than a minute. In Nicole Holofcener’s “Enough Said,” the only nonwhite character with lines is a maid. Films like “(500) Days of Summer” and “Her” cast people of color as waiters, bus drivers and nameless co-workers, all of whom appear for the briefest of moments.

White people are used to seeing people like themselves reflected in the entertainment they consume — whether as the leads, the supportive best friend, the busboy, the inspiring teacher or even the extra on his iPhone lingering in the background while the Avengers save New York for the 20th time. From 2007 to 2014, nearly three-quarters of characters with speaking parts in major Hollywood films were white, as researchers at USC Annenberg found. A separate study by McGill University and the University of North Carolina showed that of the 732 movies eligible for an Academy Award from 2011 to 2015, just 58 had two black leads. That rate comes out to an abysmal 7.9 percent.

While white audience members are accustomed to their stories and histories represented on screen, they become less comfortable when others are handed the mic. This concept is often known as the “racial empathy gap,” and it’s why your Polish grandmother might be more inclined to buy a ticket to see “Sully” than “Barbershop: The Next Cut.” You’ve probably heard this concept described as the theory that when presented images of black suffering, white people believe that people of color feel less than pain they do. But it’s also the reverse: They perceive that others like them feel more pain — because they are able to relate to the sufferer.

This has a profound effect on the way viewers engage with film. Audiences subconsciously look for films that reflect the pre-existing biases that define how they see the world. Who is worthy of empathy? Whose lives are important? In 2011, Wayne State University presented the film “Nothin’ But a Man” to a predominantly white audience. The little-seen 1964 movie, directed by Michael Roemer, breaks with many of the conventions of how black people were portrayed onscreen during the era. In the film, an Alabama railroad worker (Ivan Dixon) marries a preacher’s daughter (Abbey Lincoln), while battling the prejudice of the segregation-era South. IndieWire’s Andre Seewood claimed that many white viewers present at the screening snuck out or left early.

What made “Nothin’ But a Man” so objectionable to those who bailed on the screening was that the film doesn’t cater to the white gaze. Presenting a world where black characters are not slaves or the hired help forces white viewers to truly see the people harmed for decades by racial injustice. Similarly, “Luke Cage” is unapologetic about centering black life, including the black struggle in an era where black men are anything but bulletproof. It’s sadly fitting that the show debuts following the killings of Keith Lamont Scott and Alfred Olango, both of whom were unarmed when they were gunned down by police. Olango’s vape pen was mistaken for a gun.

“Luke Cage” makes its connection to police brutality explicit. In the original comic series, the superhero wore a form-fitting yellow dress shirt, unbuttoned to show off his chiseled torso. The Netflix series trades in the ensemble for a less flashy gray hoodie, one that becomes increasingly tattered as the show progresses. That iconography has become an explicit symbol for black America following the 2012 death of Trayvon Martin, who was wearing a similar sweatshirt when George Zimmerman fatally shot him. Zimmerman, a local neighborhood watch volunteer, believed that the attire made the 17-year-old look suspicious. In a 911 call placed before Martin’s death, the man claimed that he had feared for his life — all over a hood.

The trauma felt by the black community during an era when injustice dominates the news cycle permeates “Luke Cage,” which is greatly indebted to the blaxploitation genre that inspired the comics. In the first episode, Misty Knight (Simone Missick) is a detective investigating what appears to be a local gangland killing. She recognizes a familiar face, however, among the bodies. “Oh shit, Dante Chapman,” Misty laments. “I know his mama.” Each one of these young men gunned down is a person with a family and a community who will mourn their loss.

In a review for The New York Times, Mike Hale argued that Luke Cage should have remained a secondary cast member of Marvel’s “Jessica Jones,” starring Krysten Ritter (“Breaking Bad”) as a snarky private investigator suffering PTSD. Colter (“The Good Wife”) originated the character for Netflix on that program. “Mr. Colter was better served there, playing a stoic Cage in a supporting role,” Hale wrote. “Here he doesn’t seem comfortable carrying the show.” What makes “Luke Cage” so powerful, however, is exactly what has made so many uncomfortable about its existence: It places the state of America today directly in the center of the frame and forces the viewer to look away.