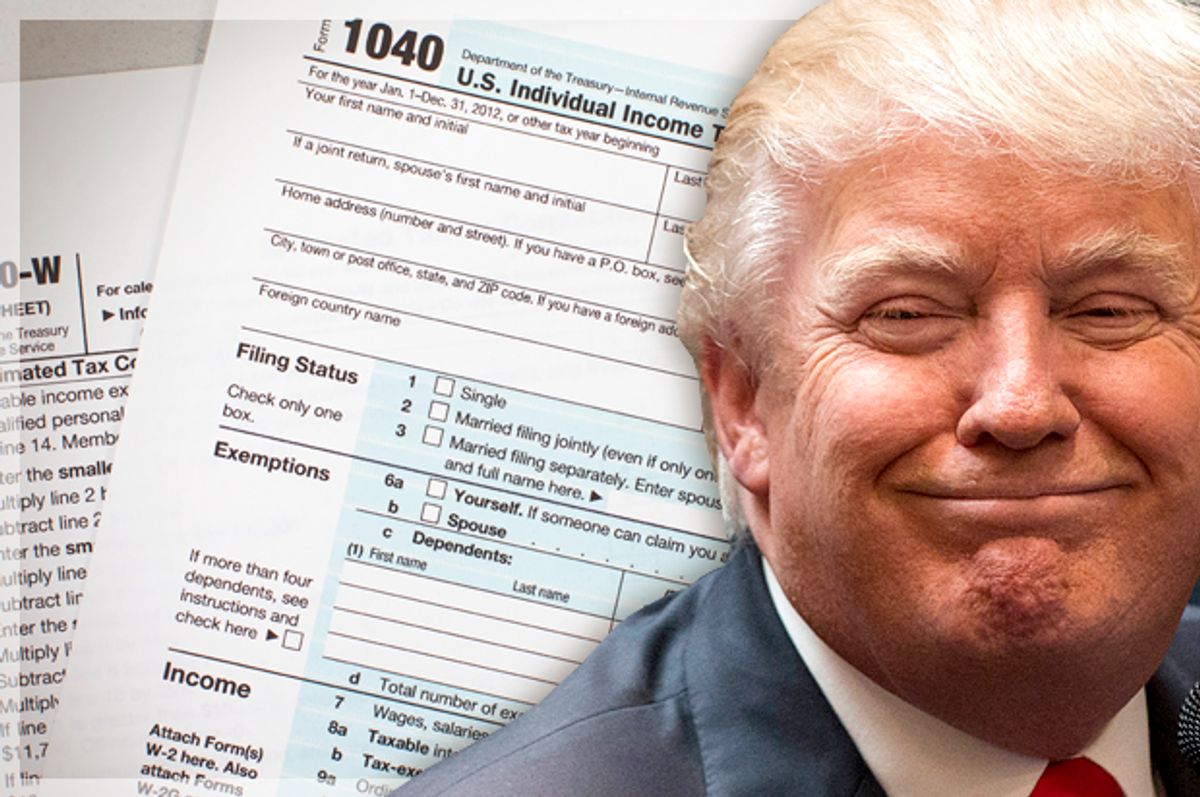 Donald Trump lost a lot of money in the mid-1990s. As The New York Times reported in its big scoop cracking through the wall of secrecy surrounding Trump’s tax information, the Republican presidential nominee reported close to a billion dollars in losses on his 1995 tax return alone. Thanks to the sheer size of the reported losses and some arcane provisions of the tax code, Trump might have enjoyed a two-decade federal income tax holiday, even as he pulled in millions of dollars in income from his businesses and TV gigs.

It’s a nice arrangement if you can get it — and you almost certainly cannot. Trump was able to turn those massive losses into a tax windfall because he is rich and because he works in real estate: two groups of people the tax code heavily favors. The perks that were available to him, even as he presided over the epically incompetent mismanagement of his business empire, just aren’t available to people of more modest means.

The key to understanding what Trump supposedly did lies in the types of businesses that he operates. As the Times noted, Trump’s business ventures are comprised largely of limited liability corporations, also known as pass-through entities, which can “carry forward” operating losses over a period of years and count them against taxable profits in future years. The policy grants some flexibility to businesses that are susceptible to boom-and-bust cycles (farms, for example) by allowing them to calculate tax liabilities over several years. On its own, there’s nothing especially problematic with that policy.

What Trump is thought to have done was to combine the carry-forward policy with a tax loophole created by Congress specifically for “real estate professionals.” As the American Prospect’s Justin Miller wrote in an excellent piece on Trump’s real estate tax shenanigans, “those who satisfy the IRS’s threshold for being a ‘real estate professional’ — which likely includes Trump — are allowed to write off an unlimited amount of paper losses against other income.”

That includes personal income, and the business losses can be used to offset such personal income for many years. This loophole was created by Congress in the early 1990s — when Bill Clinton was in the White House and Democrats held a majority on Capitol Hill — specifically for the benefit of real estate tycoons. Trump’s near-billion-dollar deduction is seen as an especially flagrant exploitation of it.

It’s also a glaring illustration of how the tax code acts as Robin Hood in reverse, treating the ultrarich preferentially as compared with the typical taxpayer. If an average person loses money on a real estate deal, he or she doesn’t get this sort of tax benefit. The taxpayer just absorbs the loss.

“The real estate [loophole] is a pretty clear and, I think, pretty potent example of a tax break where middle-income Americans look at it and just say, ‘Well, this doesn’t do anything, this is basically inapplicable to me,’” said Matthew Gardner, executive director of the Institute on Taxation and Economic Policy. “It’s legal; it probably shouldn’t be. And that ability to use these huge losses in one area to zero out your wages for tax purposes obviously is something that’s not available in any meaningful way to middle- and low-income families.”

That loophole stands alongside other provisions that the wealthy use to insulate themselves from tax liability. Experts I talked to also zeroed in on the “like-kind exchange,” a little-known loophole that began as a means for small farmers to avoid taxes when trading livestock. But it has since been used by wealthy individuals and businesses to buy and sell assets without paying capital gains taxes on them, even if those assets have appreciated in value.

Loopholes like these don’t get much attention because they’re exploited largely out of the public eye by attorneys and accountants who work quietly on behalf of the rich to minimize their tax payments. But they’re corrosive nonetheless: both to the revenues of federal and state governments and to public confidence in the tax system. The basic idea behind a progressive tax code is that the more money you make, the more you pay in taxes. These loopholes undermine that idea, and the fact that Congress either created them or refuses to act to close them gives the justified impression that the system is rigged to favor the rich.

If there’s a benefit to Trump’s alleged tax chicanery, it’s that a bright spotlight has been fixed on some previously obscure ways in which the wealthy game the tax code, enabled by legislators of both parties. (Nothing in Democratic presidential  nominee Hillary Clinton's proposed tax policies, at least so far, would close these loopholes.) The only way to move Congress to act is through sustained public outcry. And the best way to achieve that is to show everyone in ugly detail how the rich are using the tax code to, as one presidential candidate has put it, “get away with murder.”