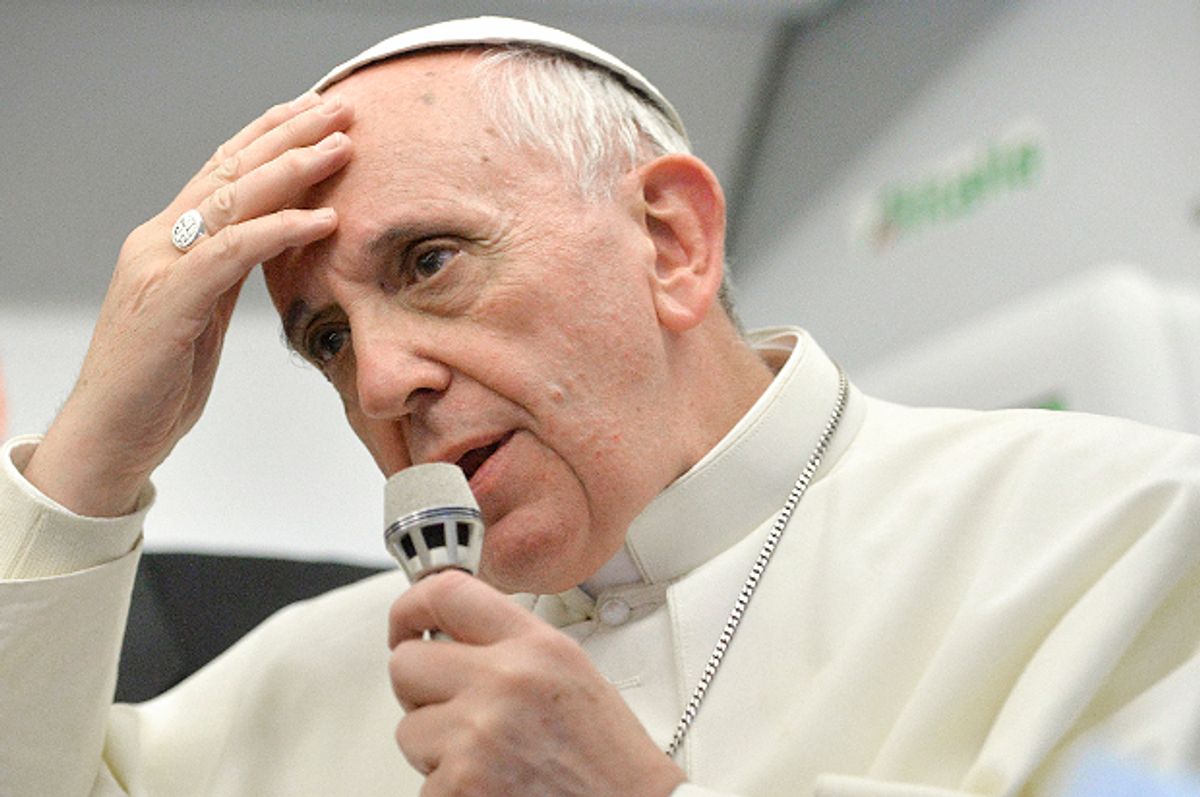 The Cool Pope may not be so cool after all.

Pope Francis, who has been lauded as pushing the church toward a more accepting view of the LGBT community, appeared to back off from that stance during a Sunday interview with reporters. While aboard the papal plane, the Associated Press reported, Francis referred to teaching gender theory or trans acceptance in schools as “ideological colonization.”

“It’s one thing if a person has this tendency and also changes sex,” the pope said. “It’s another thing to teach this in school to change mentalities.” The previous day he claimed that transgender people are launching a “world war against marriage.”

“What I was talking about was the nastiness that is present today in indoctrinating people in gender theory,” Reuters reported Francis claimed when pressed to elaborate his position.

These harsh words aren’t all that different than those of the right-wing extremists who have sought to prevent trans people from using bathrooms that correspond with their gender identity. Micah Clark of the American Family Association, the group that led a boycott against Target’s trans-inclusive bathroom policy, has referred to Gay-Straight Alliances and equal access for transgender students as “homosexual indoctrination programs.”

Sen. Ted Cruz, whom Clark endorsed in the Republican presidential primaries, added that trans people “don’t have a right to impose [their] lifestyle on others.” Cruz advised trans people to use the bathroom at home.

How can this be the same Pope Francis who was honored by the Advocate as the LGBT magazine’s “Person of the Year” in 2014? The one who — when asked about his stance on homosexuality — famously replied, “Who am I to judge?”

In truth, the Roman Catholic Church finds itself in a strikingly similar position to the Republican Party, pushing traditional, conservative values during a time when social progress has made those beliefs increasingly unpopular with its membership. Following the Supreme Court’s decision to overturn the ban on marriage equality in 2015, 55 percent of the U.S. public supports the rights of same-sex couples to wed. Intolerance, especially when the fight has already been lost, is bad optics. The public, however, has not yet caught up when it comes to transgender acceptance, meaning that trans and gender-nonconforming people remain vulnerable to being to singled out for ridicule.

The church may have lost the culture war, but the battle over trans rights remains the last available hill to die on.

Attacking the LGBT community used to be de rigueur for the Vatican, even as recently as a few years ago. In a 2003 letter titled “Considerations Regarding Proposals to Give Legal Recognition to Unions Between Homosexual Persons,” the church stated its clear and emphatic opposition to same-sex marriage.

“The Church teaches that respect for homosexual persons cannot lead in any way to approval of homosexual behaviour or to legal recognition of homosexual unions,” read the letter, which was issued under the tenure of Pope John Paul II. “The common good requires that laws recognize, promote and protect marriage as the basis of the family, the primary unit of society.”

The letter continued, “Legal recognition of homosexual unions or placing them on the same level as marriage would mean not only the approval of deviant behaviour, with the consequence of making it a model in present-day society, but would also obscure basic values which belong to the common inheritance of humanity.”

The resolution also said that “homosexuality is a troubling moral and social phenomenon,” adding that the legal recognition of same-sex unions poses a particular danger to the church because these couples may have “the possibility of adopting children.”

The Vatican would harden its stance toward the LGBT community under Pope Benedict, who co-wrote the letter during his time as a cardinal. Benedict (neé Joseph Ratzinger) would ascend to the papacy following John Paul’s death in 2005. While a prefect of the Congregation for the Doctrine of the Faith, the religious leader referred to LGBT people as “intrinsically disordered.”

“Although the particular inclination of the homosexual person is not a sin, it is a more or less strong tendency ordered toward an intrinsic moral evil,” he claimed in a 1986 memorandum, “and thus the inclination itself must be seen as an objective disorder.”

After Benedict stepped down in 2013, Francis’ papacy signaled an about-face for the church when it came to LGBT inclusion. Pope Francis struck a more tolerant, compassionate tone than his predecessors, repeatedly stressing compassion and forgiveness on both sides of the aisle.

In a March letter, Francis wrote that the church should accept and welcome populations that the religion has historically shunned, including gays, lesbians and even divorcees. “A pastor cannot feel that it is enough simply to apply moral laws . . . as if they were stones to throw at people's lives,” he wrote, adding, “By thinking that everything is black and white, we sometimes close off the way of grace and growth.”

The Pope expounded upon that message in June, urging Catholics to “apologize” to marginalized groups, stating that they “must be respected and accompanied pastorally.”

By bringing the church into the 21st century, Francis was merely catching up to his parishioners. In a 2015 survey, the Pew Research Forum found that Catholics were among the most tolerant religious groups when it came to the support of same-sex marriage. Fifty-eight percent of Catholics believe that all couples should have the right to wed, as opposed to 27 percent of white evangelicals who stated the same.

That’s also true globally: Many of the countries that are the most accepting of homosexuality are heavily Catholic. Whereas just 60 percent of the U.S. population said in a 2013 survey that relationships between people of the same sex are morally acceptable, homosexuality was OK with 88 percent of Spaniards. The Iberian country is estimated to be 70 percent to 75 percent Catholic.

Argentina is 71 percent Catholic and an estimated 74 percent of its population believes there’s nothing immoral about homosexuality. The same was true for the Philippines (80 percent Catholic), France (77 percent) and Italy (74 percent), countries in which more than 70 percent of the public stated the same.

Given the widespread support of gays and lesbians, the Catholic Church had no choice but to soften its rhetoric, even if none of its official policies have changed.

The trans community, however, has not yet benefitted from that wave of social tolerance, despite some progress in recent years. Actress Laverne Cox was nominated for an Emmy in 2014 for her groundbreaking role in Netflix’s “Orange Is the New Black,” while shows like “Transparent’ and “Strut” have brought trans issues to a national audience.

Meanwhile, trans people remain at a high risk for harassment and abuse. The Center for American Progress reported in 2011 that 90 percent of trans people have been discriminated against in their place of employment, while 70 percent have experienced negative interactions when using a public restroom. In 2013, the vast majority (73 percent) of hate crime killings in the U.S. were of trans women.

The pervasive bigotry that trans people face on a daily basis, as well as the community’s relatively small numbers, makes them extremely easy to demonize. The most recent estimate found that there were 1.2 million trans individuals living in the U.S., which means that many Americans simply don’t know (or know that they know) a trans person. A 2013 survey by the Public Religion Research Institute found that just 10 percent of respondents had a friend or close family member who is transgender. That number, however, appears to be growing.

Republicans, following the gay marriage defeat, have exploited that vulnerability by making trans people into the wedge issue du jour, giving conservatives a common enemy to fight. The GOP has cast trans people as dangerous “bathroom predators,” ones who will prey on women and young girls if allowed to use restrooms that are appropriate to their gender identity. This specter has been present in the nine states — including Illinois, South Carolina and Massachusetts — that have considered anti-trans bathroom legislation this year. North Carolina passed House Bill 2 in March, which blocks equal access in public accommodations for trans people across the state. That includes public restrooms.

Conjuring up a culture of fear and hate is ultimately a losing strategy for both the GOP and the Catholic Church. Every single anti-LGBT bathroom law that has been introduced in state legislatures has failed or stalled on the floor, and HB 2 has been a financial disaster for the Tar Heel state. UCLA’s Williams Institute has estimated that the controversial bill, which led to boycotts by companies like Apple, Microsoft and Google, will cost the state $5 billion for every year that it remains on the books.

Meanwhile, the Bible itself says absolutely nothing about transgender people, despite a brief condemning of cross-dressing in Deuteronomy 22:5. As Faith in America's director, Eliel Cruz, argued in a Washington Post op-ed, this has forced religious opponents of trans rights to get creative about their interpretation of biblical dogma.

“In the absence of any verses in scripture that actually address transgender identities, many Christians who claim to have religious objections against trans identities point to creation: God created Adam and Eve, male and female,” Cruz wrote, adding, “An anti-trans understanding of the Genesis story also lacks context.

The pope’s message on trans people boils down the old canard that the Catholic Church has been using against gays and lesbians for decades: “Love the sinner, hate the sin.” A message based on any kind of anti-trans hate isn’t just biblically inaccurate. As more people come to know and accept trans people, which is already happening, the church will be — once again — decades behind its own members.