To my kids, "Hamilton" isn't just a history lesson with cool songs. It's a timeless battle between good and evil 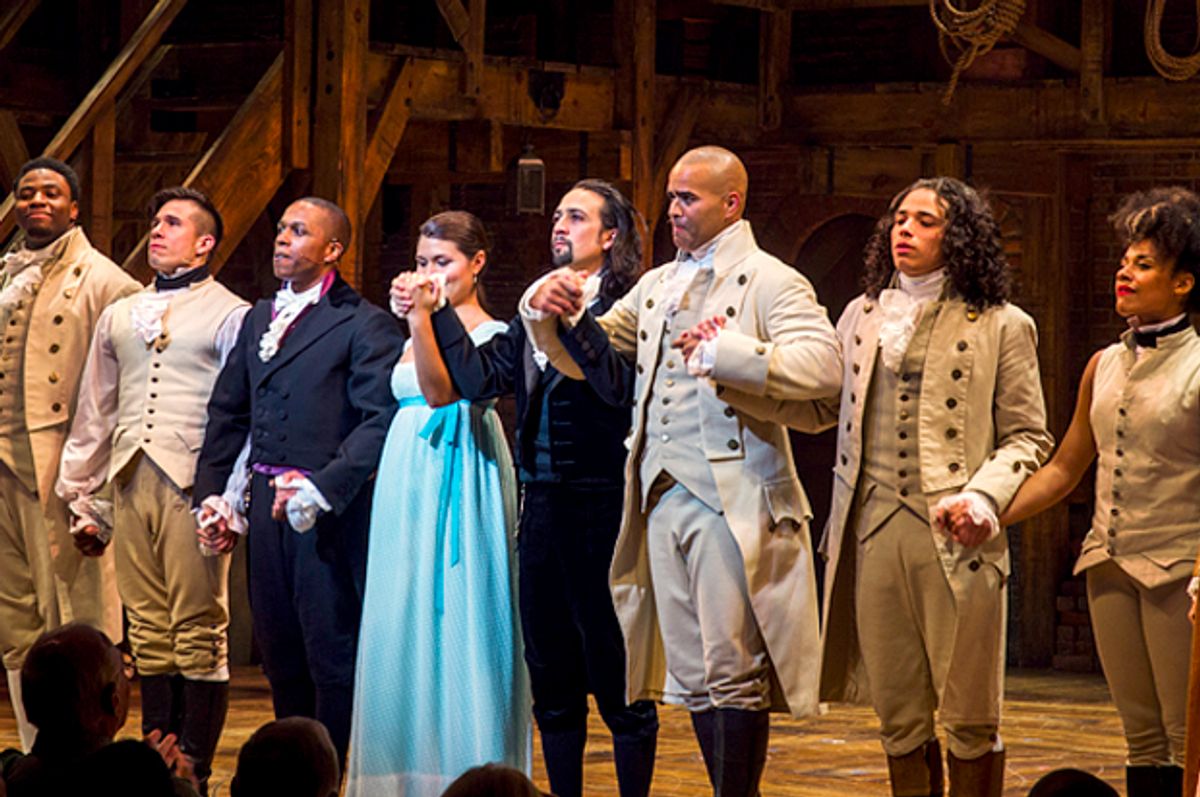 My 9-year-old thinks that Thomas Jefferson is a villain. There are several serious problems with Jefferson’s legacy, to be sure, but I don’t think that the typical view of one of our best-known and most accomplished presidents is that he is a mustache-twirling champion of evil. At least the typical view of those who have not, unlike my son, committed to memory the entire score of the hit musical "Hamilton."

Both he and his 6-year-old brother have developed a deep love, bordering on obsession, with the show — which they haven’t even seen. They have only heard the soundtrack, now going on hundreds of times. We have (legally purchased!) tickets for well into 2017, but I don’t worry that they will tire of the score, or Hamilton himself, before then. No other cultural phenomenon, not even "Star Wars," has stuck with them so indelibly, or for so long, as "Hamilton." Talking to my friends, they are far from the only obsessed Hamilkids out there.

We first heard the soundtrack on a long car ride to Vermont late last fall, me pulling over to the side of the road to download it after hearing about it on a podcast. I figured the kids wouldn’t be listening anyway — that they would be on their iPads, deep into some "Minecraft"-induced trance. And now, a year later, the question isn’t whether any of us have a song from "Hamilton" in our heads, but which one.

I have tired of their other previous obsessions, like, ahem, "Star Wars," and abstain entirely from others (ugh, "Minecraft"). I am happy, however, to share and encourage their infatuation with "Hamilton." Lin-Manuel Miranda’s music has completely captured their imaginations. It has ignited a love in them for hip-hop, Broadway and American history.

"Hamilton" pops up in our days in many ways. My 6-year-old has a special “Alexander Hamilton voice” that he puts on when he wants his words to achieve maximum impact. It sounds a little like Pee-Wee Herman, and he uses it in school too. Sometimes he just yells out “Eliza!” apropos of nothing. Sometimes I point a wooden spoon at a child while I am cooking dinner, and accuse them: “What did they say to you to get you to sell New York City down the rivaaaaah?” Other times, it’s “Cabinet Battle #1” at the bus stop, debating the villainous qualities of the man on the nickel, which the 6-year-old is learning about at school that day.

As they potter around the house, they often spout out lyrics from “My Shot,” in which Hamilton’s band of merry men introduce themselves. “I’m John Laurens in the place to be,” the 6-year-old shouts. “Two pints of bakalaka, but I’m working on three.” "Bakalaka," here, stands in for Sam Adams, as in the beer. That’s what they do with the few instances in the play where the lyrics wander into R-rated territory. They skim right past it; having no reference point in life for Sam Adams, “bakalaka” will do instead. We don’t dwell much on “Say No to This,” in which Hamilton outlines his affair; they just know he has done some unkind bakalaka that he shouldn’t have. That’s enough explanation for now. Yet they can pinpoint each of the two f-words in the play. I had to explain to my 9-year-old that the actual name of Jefferson’s political party was not, officially, “Southern Mother-F’ing Democratic-Republicans.” He was disappointed.

Why is it, I wondered, that a musical about America’s first Treasury Secretary has surpassed, and outlasted, every other boyhood fascination that they have yet had? I think they love the music, first of all. Beyond that, "Hamilton" has that particular element that appeals to them in books, movies, television, or even video games: the timeless, endless, epic battle between good and evil. For them, as for most kids, everyone in the world, be they superheroes, teachers, or even parents, fall cleanly to one side or the other: hero or villain. In "Hamilton," they’ve found both: the daring, brilliant Alexander Hamilton, and not one, but two dastardly dandies who dare step to our man: the nefarious Jefferson, who openly tries to take Hamilton down through the medium of rap battles, along with his toady James Madison, and oh, yeah: Aaron Burr. Hamilton’s evil twin, and his murderer. That guy.

The best thing about the boys’ Hamillove, for me as their parent, is that what began as a piqued interest in mouthy villains and dueling at dawn has turned into sustained conversations about the making of America. And the more they listen, the more complex their questions have become. How did the Revolutionary War begin? What is manumission? When did women get the right to vote? What are states’ rights? Why are immigrants, like their grandmother, so vital to the American story? And of course, what is the Compromise of 1790? Thanks, Wikipedia, for the refresher on the subject of their favorite song: “The Room Where it Happens.”

Last spring, we took a family trip to Washington, D.C., with that song, as ever, in our heads, and on the car stereo. We duly noted the Alexander Hamilton rest stop on the New Jersey Turnpike. Speeding past it, we looked out into the bleak distance, the Hudson River somewhere below the industrial fields near Weehawken. Beyond, there is a patch of green, and a stone, where Burr fired his fatal shot. We paused the soundtrack to reflect. “Is there still blood on the stone?” my 6-year-old asked, hopeful and wide-eyed.

That’s just it. Because of "Hamilton," these people — Hamilton, Burr, Jefferson, the Marquis de Lafayette, Angelica Schuyler, “Hercales Muggle-an,” and George Washington himself — are now, to these boys, just that: flesh and blood. Through the music, they have come to know them all as people who, in their time, got angry, forged friendships, joked around, and loved their children. That has proved a powerful tool to teach them not just history, but that history matters. That it is more than a cold stone in a park somewhere. It affects, and reflects, their lives.

"Hamilton" has started a conversation that I hope will last their lifetimes. Come next year, at the Richard Rodgers Theater, I can only hope to stop my sons from standing on their seats and hurling a whole lot of saved-up bakalaka Thomas Jefferson’s way. Or you know what? Let them. That guy…

Jeanna Lucci-Canapari is a freelance writer near New Haven, Connecticut. If she were a Schuyler sister, she would insist on being Angelica. She blogs about her attempts at cooking for her two young boys at fussymother.wordpress.com.