Radical resurgence: In Afghanistan, the Taliban is becoming more powerful

How the U.S. failed in making long-lasting change 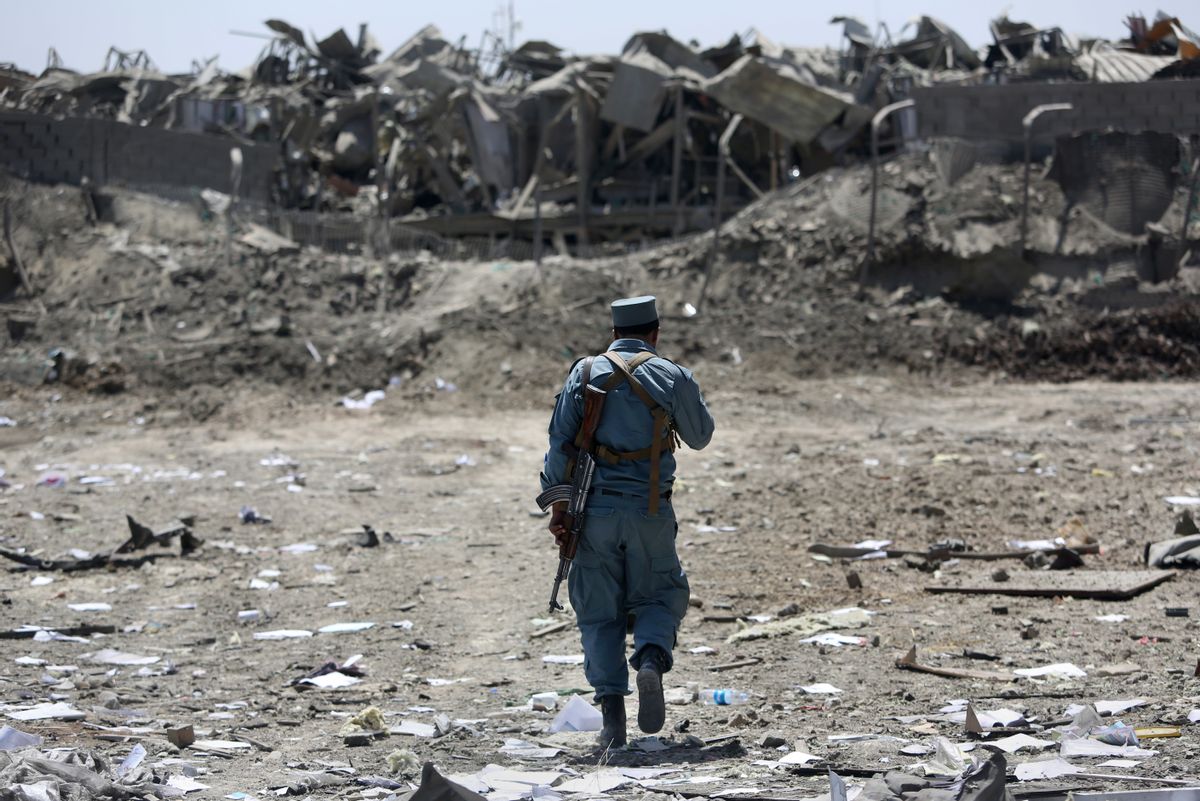 FILE - In this Monday, Aug. 1, 2016 file photo, an Afghan Security policeman inspects the site of a suicide truck bombing, in Kabul, Afghanistan. (AP)
--

Fifteen years ago, the United States went to war on Afghanistan. It was the opening salvo in the Global War on Terror. Massive U.S. bombardment chased the Taliban and al-Qaeda into the mountains as well as into neighboring states — such as Pakistan. Amongst those who fled the scene was Osama Bin Laden, who was not killed until 2011 — 10 years later. The U.S. war aims were simple: prevent Afghanistan from being a haven for al-Qaeda and bring democracy to Afghanistan by ejecting the Taliban. There were also noises made about liberating women and educating the Afghan citizenry.

A decade and a half later, the Taliban is back in force. It commands large parts of the countryside, and threatens major urban areas. Kunduz, in the north, has been going back and forth between the Taliban and the Afghan National Army. Just this week, the Taliban forces took the center of the city, only to be ejected a day later. In Helmand Province in the south, home of the US Surge, the Taliban threatens the provincial capital of Lashkar Gah. It already holds six of the fourteen districts of Helmand — Baghran, Dishu, Musa Qala, Nawa, Now Zad and Khanashin). The rest of the district is almost entirely dominated by the Taliban. Just north of Helmand, the Taliban threaten the provincial capital of Uruzgan — Tarin Kot. Much of southern Afghanistan, in other words, is in the craw of the Taliban.

Not only is the Taliban back in large parts of Afghanistan, but also elements far more radical than the Taliban formed the Islamic State’s Khorasan brigade. Near the Pakistan-Afghanistan border — in Nangarhar — the Islamic State operates with virtual impunity. On Oct. 4, 2016, a U.S. soldier on foot patrol died when an Islamic State bomb exploded in his path. He was the third U.S. soldier killed in 2016. The Islamic State initially collaborated with sections of the Taliban, but then broke with it. It is just one more of the little outfits in the borderlands of Pakistan and Afghanistan that fly the black flag. My friend and colleague the late Saleem Shahzad wrote that by 2008 "al-Qaeda’s ideology was too deeply entrenched in the minds of the mountain men, their strategy so clearly marked on every mountain, rock, and stone in the tribal areas, that the militant leaders felt little worry facing the world’s best armies." It does not matter if the local outfit is linked to al-Qaeda, the Haqqani network or the Islamic State — all of them serve their purpose.

Neither of the main war aims of the U.S. has been met: Afghanistan remains a haven for militancy, and democracy seems impossible to foster in these conditions. Surely there have been gains around Kabul, where the city has grown and various services are available to its population. It is here that the former World Bank executive Ashraf Ghani rules — reading data books to create policies that do not run further than the outer reaches of the capital city. Ghani knows that security is the first priority. Shortly after he came to power in 2014, Ghani reached out to Pakistan — whose intelligence services and military continue to provide support to the Taliban. He wanted Pakistan to deliver a peace deal with the Taliban and other militants. The creation this year of the Afghan Quadrilateral Coordination Group (QCQ) — which comprises Afghanistan, China, Pakistan and the United States — was to help pressure the militants to come to the table. Nothing has come of it as yet. Ghani no longer seems to have good relations with Pakistan. His forces fight as fiercely as they can but they are mainly holding territory, or winning it back after gains made by the Taliban. There is no sign of momentum on their behalf.

The United States has certainly withdrawn its land forces, but it continues to hit the Taliban and other militants from the skies. These — mainly drone — attacks kill leaders but do not dent the Taliban. When the Taliban confirmed in 2015 that their leader — Mullah Omar — had died two years previously, they hastily announced that their new leader was Mullah Akhtar Mansour. On May 21, 2016, a U.S. drone strike in the Pakistan province of Balochistan executed Mullah Mansour. The killing made no impact on the Taliban. He was quickly replaced by the cleric Mullah Haibatullah Akhundzada. His deputies are the son of Mullah Omar — Mullah Yaqoob — and Siraj-ud-din Haqqani, who leads the Haqqani network. This is a Taliban that is not going to be defeated by the execution of its leaders. That means that the only weapon in the US arsenal — execution by drone strike — is not going to dissolve the Taliban.

Peace talks with the Taliban are not on the cards. Military victories across the country embolden them to expect greater territory under their command before they need to return to the table. President Ashraf Ghani meanwhile has made a deal with one of the most repellent of the mujahideen leaders – Gulbuddin Hekmatyar who leads the Hizb-e-Islami. Many years ago, the Afghan communist leader Anahita Ratebzad told me that of all the mujahideen leaders Hekmatyar was the most dangerous. He had made his name by throwing acid on the faces of young women at Kabul University. The Americans feted him during the jihad against the Communist government, making Hekmatyar a "freedom fighter." It was a disgusting spectacle then and is now a sign of the complete failure of the American project and of Ghani’s data-based "good governance." Hekmatyar is Pakistan’s man in Kabul, a shadow of his military strength previously and a repudiation of any liberal pretensions of the current government.

The United States has conducted over seven hundred airstrikes this year — all in support of the Afghan army. It has conducted nearly 300 drone strikes in Pakistan against Taliban and al-Qaeda leadership. The strike that killed Mullah Mansour was in Balochistan, outside the kill zone agreed upon between the United States and Pakistan in 2010. This is not the only indication that the United States link to Pakistan is strained. The United States has openly told Pakistan not to expect F-16 fighter jets or its military aid without strict conditions. The National Defense Authorization Act of 2016 specifically tells Pakistan to continue to hit the Taliban in North Waziristan, to disrupt the Haqqani network and to prevent the movement of Pakistan-based militants into Afghanistan.

Ghani might cavil at the failure of Pakistan to meet these conditions, but he nonetheless was willing to bring in Pakistan’s man – Hekmatyar – into his orbit. Tension between the United States, Pakistan and Afghanistan continues. Everyone is aware of the Pakistani intelligence’s role in bolstering the Taliban. No one seems to be able to do anything about it. An old friend who is now quite senior in the Afghan government suggests that Pakistan is his country’s major problem – the unfinished tension with Pakistan over the boundary (the Durand Line) as well as Pakistan’s fear that India might be too influential in Kabul. If Afghanistan and Pakistan would settle these problems, he says, then Kabul has a chance.

It is too much to hope that a deal between Afghanistan and Pakistan would be sufficient to solve the problem. Decades ago, the West aligned itself with people like Hekmatyar to thwart the Afghan left. Today, that left is almost non-existent. It was wiped out — sent into exile or killed — and its memory is erased. The resources for Afghanistan to emerge out of the nightmare of its recent part are lessened by the absence of the forces of the left. The social forces unleashed by the West, Saudi Arabia and Pakistan have tormented Afghan society. This social transformation – with the mujahideen as the pinnacle of Afghan patriotism – took place with immense resources and over time. No countervailing force is available today. There might be windows of peace in Afghanistan, but there should be no illusion about any long-term stability and development. Anahita Ratebzad, the Afghan Communist, told me that the excision of the Afghan left produced a society without the resources for a peaceful and prosperous Afghanistan. When the left governed the country women held 70 percent of the teaching jobs and 50 percent of the civil servant posts. It might surprise one to know that in those days 40 percent of the doctors in Afghanistan were women. It was the West that disrupted this positive dynamic. That it returned to Afghanistan in the name of liberating women is an obscenity. That Hekmatyar is back in Kabul and that the Taliban makes its gains across the country should not be seen as an indicator of some form of essential Afghan brutality. The fingerprints of the West and the Saudis are all over the social morbidity in Afghanistan. That there are no easy solutions should not be blamed on Afghanistan. People like Anahita Ratebzad, true Afghan patriots, had a vision for their society. If she were alive today, she would weep once more in anger for her country – now 15 years into the Global War on Terror.