A Human Rights Watch researcher condemned U.S. "stonewalling" on use of American weapons in Saudi-led war 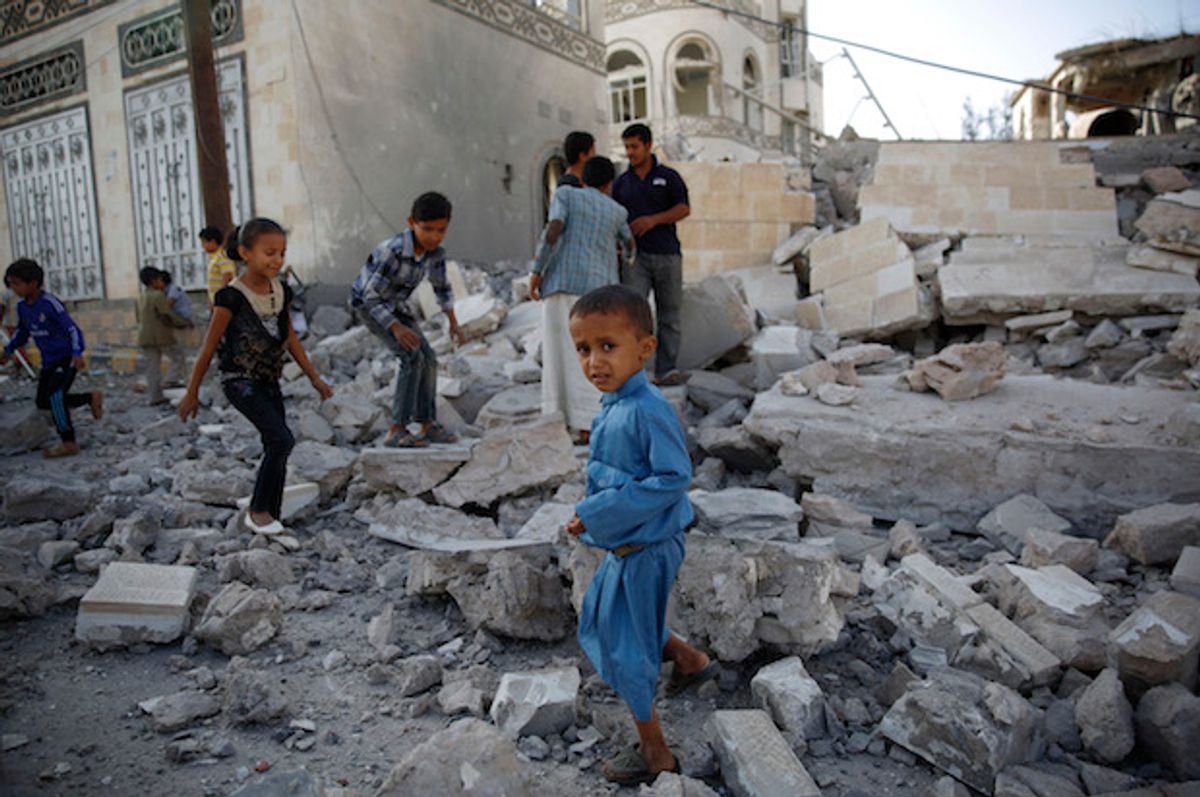 Yemeni children play in the rubble of a house destroyed by a Saudi-led airstrike in Sanaa, Yemen on Sept. 8, 2015 (AP/Hani Mohammed)
--

Human Rights Watch has criticized the U.S. government for "making excuses" for the atrocities committed by its close ally Saudi Arabia in its war in Yemen.

"Despite rising outrage over the bloody civilian toll in Yemen’s war, the United States administration is showing no signs of breaking with — or attempting to check — the actions of its ally Saudi Arabia," Priyanka Motaparthy, senior emergencies researcher at Human Rights Watch, wrote on Thursday.

Since March 2015, a coalition of Middle Eastern countries led by Saudi Arabia and armed and supported by the U.S. and the United Kingdom has brutally bombed Yemen, the poorest country in the Middle East.

"The U.S. has supported the Saudi-led campaign with aerial refueling and targeting assistance without criticizing Saudi Arabia and its allies for repeatedly and unlawfully bombing civilians, committing apparent war crimes," Motaparthy wrote.

The Human Rights Watch researcher stressed, "The nature of this support makes the U.S. a party to the armed conflict, and potentially culpable in unlawful strikes."

More than 10,000 Yemenis, including at least 4,000 civilians, have been killed in the 19-month war, according to the United Nations. Thousands more civilians have been injured, and the war has destroyed much of the country's infrastructure, creating what the U.N. says is one of the worst humanitarian catastrophes in the world.

Several reports were published this week warning that Yemen is on the brink of famine. Salon reported on the threat of famine in January. More than half of Yemen's population, at least 14 million people, are going hungry.

In a recent article in the Washington Post cited by Motaparthy, titled "Civilian casualties in Yemen bring charges of U.S. responsibility for Saudi actions," U.S. officials defended their alliance with Saudi Arabia. They claimed Saudi war crimes in Yemen have been “errors of capability or competence, not of malice.”

“When we see civilian casualties, it puts us in an extremely awkward position, because Saudi Arabia is a close ally,” a State Department official told the Post on condition of anonymity.

When faced with criticism, the State Department has frequently reaffirmed its close partnership with Saudi Arabia, a repressive absolute monarchy that bases its laws on an extreme interpretation of Islam known as Wahhabism.

Human Rights Watch is not buying this excuse. "Whether Saudi targeteers were malicious or simply poorly trained does not absolve the government of responsibility," Motaparthy pointed out.

She added, "Indiscriminate attacks that fail to distinguish between civilians and military objectives as well as those that cause disproportionate loss of civilian life or property are also illegal under the laws of war."

Saudi Arabia has only been able to carry out the war in Yemen because of U.S. support. Since Obama entered office in 2009, his administration has offered more than $115 billion in arms deals and military support to Saudi Arabia — including more than $20 billion since 2015.

In addition to the massive weapons sales, the U.S. has done more than 1,000 refueling sorties for Saudi planes, providing tens of millions of pounds of fuel. And U.S. officials have given targeting advice, sometimes while in the same room as Saudi military personnel.

The Human Rights Watch researcher noted that when she visited Washington, to share the group's findings on Saudi attacks on civilians, U.S. officials insisted the Saudi military was just bad at targeting. "This belief strains credulity," Motaparthy said.

Research by Human Rights Watch and other rights groups like Amnesty International, along with a report by a panel of U.N. experts, has documented U.S.-backed, Saudi-led coalition airstrikes on a host of civilian targets, including hospitals, schools, homes, factories, refugee camps and more.

The Saudi-led coalition has been fighting Yemen's Houthi rebels, who in early 2015 ousted former president Abd Rabbuh Mansur Hadi, an ally of Saudi Arabia who took exile in the country when the war began.

Both the Houthis and the Western-backed coalition have been accused of war crimes. The U.N. has repeatedly reported, however, that the Saudi-led coalition is responsible for most of the civilian casualties.

Human Rights Watch noted that there have been "no serious investigations" into the atrocities committed in Yemen. In fact, Western allies of Saudi Arabia have blocked multiple U.N. attempts to launch independent inquiries — first at the U.N. in September 2015, and again in September of this year.

Motaparthy emphasized, "U.S. officials will need to provide better answers for Saudi actions, rather than making excuses or stonewalling on the U.S. role and how U.S. weapons have been used."