Basest instincts: Donald Trump’s apology sounds like a rapist saying “she asked for it”

Will Trump’s lewd comments and "apology" even hurt him with his racist, misogynist "basket of deplorables"? 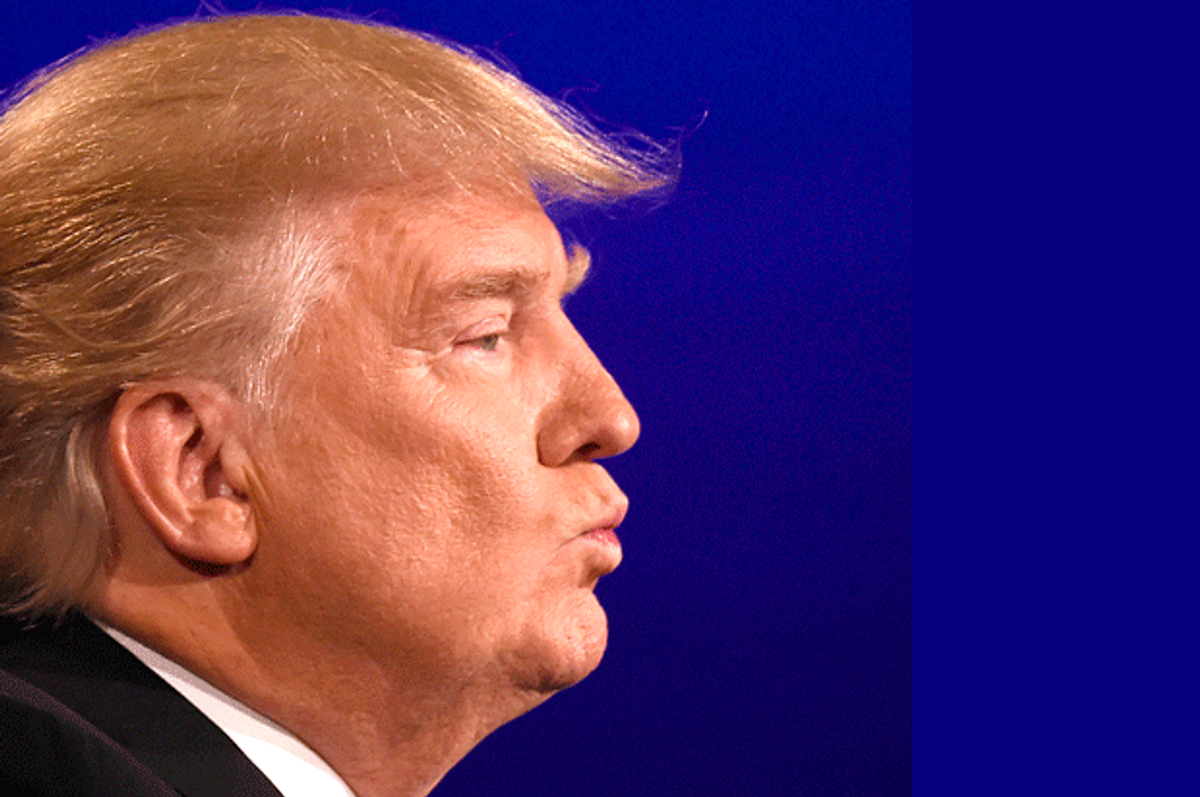 The 2016 Republican presidential campaign is an Adam Sandler comedy. Donald Trump is the lead character — an amalgam of Happy Gilmore and Billy Madison and any number of others.

On Friday, the Republican presidential campaign turned scatological comedy movie would crescendo to a new low. The Washington Post released a recording of Donald Trump during a 2005 taping of the TV show “Access Hollywood.”

There, alongside Billy Bush, Donald Trump was shown saying:

Here, Trump is speaking — joking, he would try to claim — about sexually assaulting a woman because he believes that he is empowered to do so by his stardom, fame, and inherited money.

Such comments should further imperil Trump’s presidential candidacy with suburban white women and college educated white voters—two groups that his brand of Right-wing faux populism, assault on normal politics, bullying behavior, ill-temperament, and hostility to “political correctness” have, to this point, alienated.

However, the 2016 presidential race is an outlier where anything seems possible and many of the standing rules and norms of modern American politics have been broken.

Could Donald Trump’s most recent instance of crude behavior actually boost his support?

To wit: There is recent research in the journal of Political Psychology which suggests that disrespectful behavior may actually be rewarded by some voters.

We already know that Trump is an avatar and idol for the "basket of deplorables" that have flocked to his banner. As demonstrated by numerous public opinion polls and other research, Trump’s voters are racists, sexists, misogynists, nativists, and bigots. They are compelled to Trump because he rejects “political correctness.”

Or alternatively stated: Trump’s voters have little to no respect for non-whites, Muslims, women, gays and lesbians, or any other group that they feel are their social and political inferiors. Trumpthuglicans are authoritarians possessed of social dominance behavior.

Trump’s voters do not support him because of his policy expertise or experience. No. Trump is a celebrity and supposedly “successful” businessman that they can live vicariously through as he blows up the system and demeans their fellow Americans.

After Trump’s statements about grabbing the genitals of unwilling women grew into a cacophony of condemnation across the American news media, he issued two statements. The first was contrite. The second was far more damaging.

In the latter, Donald Trump sounded like someone reading a forced confession with a gun pointed at his or her head.

"Hillary Clinton and her kind have run our country into the ground. I’ve said some foolish things, but there’s a big difference between the words and actions of other people. Bill Clinton has actually abused women, and Hillary has bullied, attacked, shamed and intimidated his victims."

This so-called “apology” has the tone of a convicted rapist admitting to the crime but then saying that “she asked for it.”

I have written many essays about Donald Trump. And I return to a basic question: How can any decent person back Donald Trump? They cannot. Any Republicans or Independents who support Trump are (again) demonstrating that his “basket of deplorables” is far larger than Clinton so modesty suggested several weeks ago.

The American presidency is not a comedy skit or a stage for frat boy humor. The adults — if any remain in the Republican Party — need to send the crass man-child Donald Trump back to his room before he embarrasses them (and himself) anymore.