Crisis of faith: Donald Trump's revelations and the hypocrisy of the Christian Right

Why did it take this for one of this campaign's great lies — that Trump is a fine Christian man — to be laid bare? 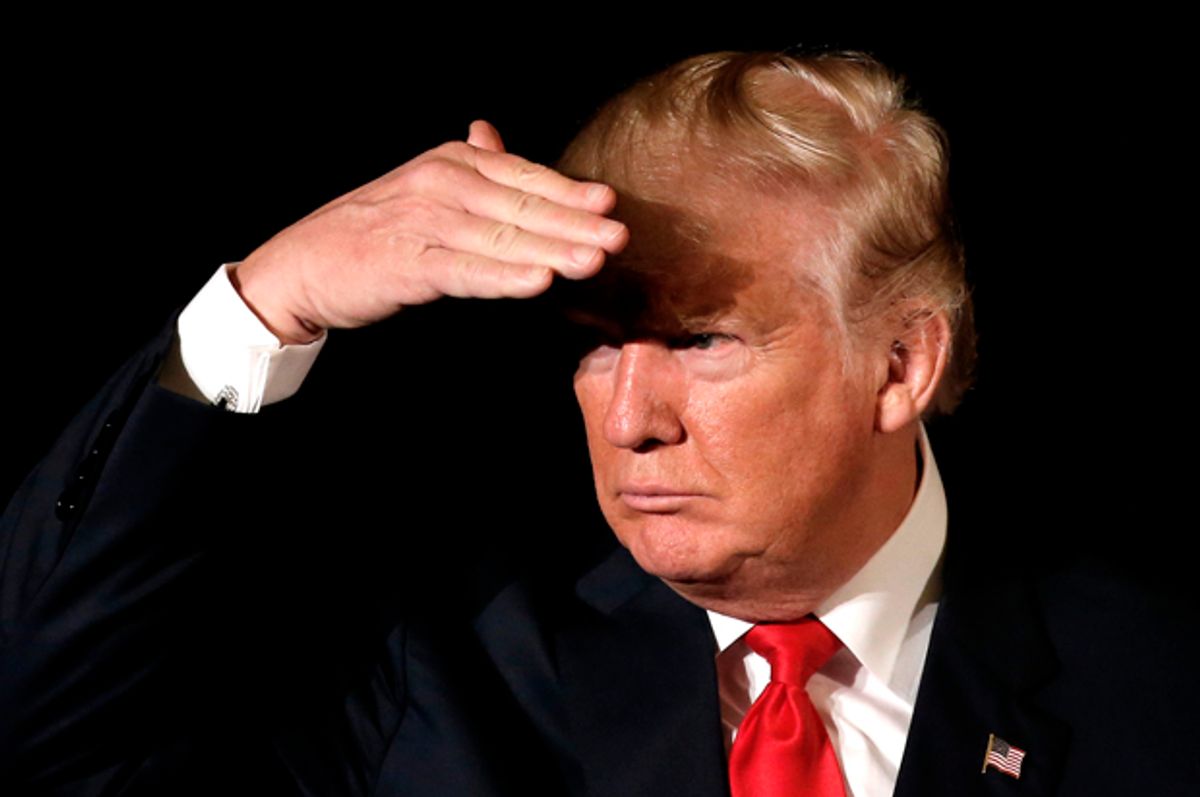 Now that Donald Trump has failed twice in the space of a day to demonstrate the ability to apologize for criminal conduct he was caught boasting about on a hot microphone, let’s step back and ponder, to use his words, what the hell is going on.

How did the party that says it is for family values make such a vile old man its standard bearer? Why do so many leading Republicans stay with him or, gingerly, distanced themselves only after this latest revelation? How can any pastor endorse him, much less praise him as “a fine Christian man” and “unwavering in his commitment” to Christian concerns?

And why didn’t our major news organizations vet him, telling viewers, readers and listeners what the public record shows about his lifelong conduct from embracing violent felons to giving answers in interviews and presidential debates that are gibberish?

These questions all point in the same direction: our democracy is in deep trouble because we fail to respect the liberties and opportunities America makes possible as millions have come to view politics as nothing more than a reality television show.

For millions of people, strategy in a football game is worthy of occupying a large part of their brains. But politics, no way.

Republican politicians who are timid say they are appalled by Trump, but do not disavow him. Most of the few who have are Mormons, whose moral upbringing leaves no room to tolerate boasts about grabbing women by their genitals.

Pastors who favor the prosperity gospel, some of whom serve on Trump’s “evangelical executive advisory committee,” preach sacrifice and the duty Christ imposed on them to not just pray, but to provide for the poor. Like the apostate Muslim zealots who hate America, they are at one not with the Christian god but with Trump in spewing hatred of Muslims.

Consider the stance of Governor Mike Pence, Trump’s running mate, who says on the campaign trail that first he is a Christian and that Trump "tells it like it is."

How can Pence not recognize that the man he embraces – and lies for, asserting Trump never said things that recordings show he did — espouses a philosophy that is aggressively anti-Christian. Jesus said to love everyone, even your enemies. Trump spews hatred against Mexicans (“they’re killers and rapists”) Muslims, Chinese, African Americans (“the blacks”) and he has been found in official proceedings to have discriminated against Asians, blacks, Puerto Ricans, and women.

Trump does this because as a world-class narcissist, and the son of a bigot arrested in a 1927 pitched battle by KKK members and supporters against New York City’s finest, he perceives others not as human beings but objects. Trump so loves money over people that he has complained about how much it cost him to have access to one of his second wife’s body parts.

It’s not Christian to cheat workers out of their wages, but Trump has done it all his life. He fought for 18 years to not fully pay illegal immigrants hired to demolish the old Bonwit Teller department store to make way for Trump Tower.

The Bible is full of admonitions to pay workers in full. Romans 4:4 says “to one who works, wages are not reckoned as a gift but as something due” and I Timothy 5:18 says “The laborer deserves to be paid.”

Trump’s more than 150 illegals were so desperate that some slept in winter cold in the unheated building they were demolishing. They were promised a mere $4 an hour (about $13 an hour in today’s money) the Old Testament at Deuteronomy 24:14-15 is especially on point, emphasis added:

You shall not withhold the wages of poor and needy laborers, whether other Israelites or aliens who reside in your land in one of your towns. You shall pay them their wages daily before sunset, because they are poor and their livelihood depends on them; otherwise they might cry to the Lord against you, and you would incur guilt.

That Trump does not feel the guilt he has earned was obvious when he tried for the first time in his public life to say sorry and blew it both times. First he issued a statement about his vile remarks that shifted responsibility from himself to us, saying he was sorry “if” he offended. The second time he said it happened a long time ago and he is not really like that and then read a statement attacking his opponent and her husband.

To actual Christians, seeking forgiveness from God is a constant and thus familiar experience.

Trump told CNN’s Anderson Cooper he has no such need. "Why do I have to repent or ask for forgiveness if I am not making mistakes?" Trump said.

Worse, Trump lied in his second attempt at apologizing. Trump, clearly reading from a script, said "I've never said I'm a perfect person, nor pretended to be someone that I'm not. I've said and done things I regret.”

So which is it? Trump never made a mistake and never needed to seek forgiveness? Or Trump says he is not perfect?

Welcome to the mind of Donald Trump, a 70-year-old man trapped for decades in the emotional maturity of a crude, nasty and insecure 13-year-old boy. That was when daddy sent him off to a military academy because he was what was known in the day as maladjusted. In The Making of Donald Trump, I take note of reports that Trump liked to throw rocks at toddlers in playpens, among other early signs that as an adult he would be manifestly unfit for any public office.

For Trump being emotionally stuck for decades in the worst year of pubescence has been awful and it has made him miserable, mean and lonely. But for America his immaturity has been a disaster. Cheating other businesses, wives, employees, tax rules and attacking others who point to this misconduct has hurt not just those individuals, but now that he is the Republican Party’s nominee for president he is damaging our democracy.

The many foreign journalists who have interviewed me about Trump it be past year all ask how could a country so great as America pay any attention to such a buffoon?

What Trump said on the tapes is not just crude, but an admission of criminal behavior.

Most crimes are never even investigated by police so it’s no surprise Trump has never been arrested. I once spent days with an aged hitman, his stories all verified by FBI and local police reports, who was immensely proud that he had never been booked.

Need any pastor know more to recognize that Trump is no Christian, but a deceiver who beguiles them with flattery as he commits not just adultery, but criminal sexual assaults on women?

Trump at great length, in different forums and over many years has declared a philosophy antithetical to the teachings of Jesus Christ.

“I always get even,” Trump wrote in the opening of chapter 6 in his book Think Big. He also writes, and said in a profanity-laced Colorado speech, that it gives him pleasure to ruin the lives of those who do not show absolute fealty to him.

“If someone screws you, you screw ‘em back ten times over. At least you can feel good about it. Boy, do I feel good,” Trump declared.

Revenge is anti-Christian. Pastors all know Matthew 5 where Christ, in the Sermon the Mount, instructs the faithful to turn the other cheek. Trump says those who follow this teaching are fools, idiots and, making clear he means the vilest definition of the Yiddish word, schmucks.

Of course since forgiveness is central to the Christian faith nonbelievers might think that Trump’s conduct must be forgiven. But in neither Old Testament or the New are the faithful told to enable or look the other way. Consider 1 Corinthians 5:11:

But now I am writing to you not to associate with anyone who bears the name of brother or sister who is sexually immoral or greedy, or is an idolater, reviler, drunkard, or robber. Do not even eat with such a one.

Trump’s claims to care about others are a fraud. He cheats people, he put the life of a sickly infant in jeopardy to get more money. And he says wages are too high.

Trump’s claims that he alone can fix America’s problems are a fraud. He doesn’t know anything about how democratic government works, not the duties, limits and powers of the presidency or how no bill becomes law without the approval of the Speaker, Paul Ryan, whom Trump gratuitously attacks.

Finally, be aware that Trump’s campaign has been a fraud from the get go.

Trump announced his campaign on June 16, 2015, with a racist, xenophobic rant at Trump Tower, a crowd clapping its approval.

How did the national politics reporters covering this fail to report the disconnect between this diatribe and Trump Tower being in Manhattan, the center of what Trump calls “political correctness?”

The seemingly adoring Trump Tower crowd broke into applause 43 times but it was not because they are members of the KKK or read Daily Stormer.

Those clapped on cue because they were actors paid fifty bucks each.

Ask not who is ruining your country, ask what you are doing to save it from Donald Trump and his enablers.