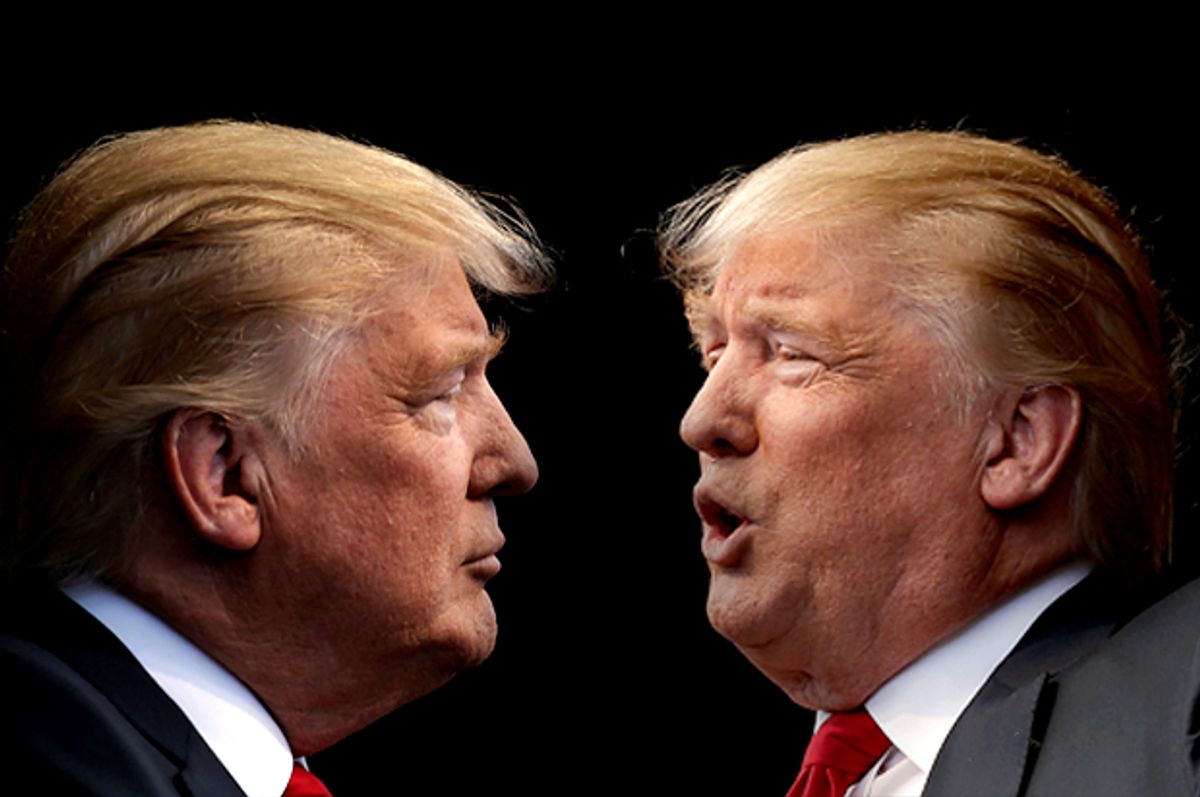 To prevent a repeat of the first presidential debate and keep their candidate focused and engaged, Donald Trump’s advisors have agreed to his debate prep demands, which are that he be allowed to debate himself and be the moderator.

TRUMP: The first question is about race. Who is the least racist person you’ve ever met?

TRUMP: Get a load of this guy….

TRUMP: I meant I didn’t hear you call them “You people….”

TRUMP: Okay, then. It’s fine. I thought I heard a pop. You know, you people walk down the street, you get shot.

TRUMP: The Benevolent Association of Policemen endorsed me. All of them. Even the fat ones. Even the bowsers.

TRUMP: I know a guy, he makes microphones. Has a beautiful microphone factory. I buy microphones from him. The best. I use them in all my hotels. In the banquet rooms. In the showrooms. When I sent a karaoke machine to Putin. Now, I haven’t paid this guy and he’ll end up having to settle for 30 cents on the dollar, but that’s because it’s called business. It’s not called “paying people what you're contracted to pay.” It’s called business. The point is I could have gotten a much better microphone from this guy for this thing, and nobody would have had to pay. And that’s what we need.

TRUMP: I know the same guy. He’s a good friend. He’s actually a better friend of mine. Ask him. I saw him last week. I said, “How’s it going with the microphone business?” He makes microphones. He said, “Fantastic. You wouldn’t believe it. We just opened a new microphone factory. In Bimini. You won’t believe what’s happening down there. Bimini. Bimini.” And then he thanked me for asking him how it was going. And he called me his best friend. This is the thing we’re trying to do, this thing.

TRUMP: Bimini is where a lot of people hide their money so they don’t have to pay taxes.

TRUMP: Where’d you get that?

TRUMP: Next question: Where’d you get that?

TRUMP: Mr. Trump. Same question. Where’d you get that?

TRUMP: Degeneres is French. And I think we all remember what happened in France. Should never have happened. I called it. And if it hadn’t happened, I would have called that.

TRUMP: I never said that.

TRUMP: But a lot of people are saying you said that.

TRUMP: You got that from me.

TRUMP: Where'd you get that?

TRUMP: On to foreign policy. This question concerns Germany, where I’ve done some fabulous deals and met some misunderstood Nazis. So misunderstood.

TRUMP: Of course, I remember the dress. You think I’m an idiot? You think I’m too stupid not to remember a dress, or the strings my father pulled to get me into an Ivy League school?

TRUMP: Staying on the topic of the world stage, because I am disciplined and on message. Incredibly disciplined. Maybe the most disciplined person you’ve ever met. By the way, the world stage, which Hillary Clinton may have infected with bacterial meningitis. What would you do to restore stability to the Middle East, the instability you predicted, and how important are our Muslim allies in the region, of whom you know many and they are sensational?

TRUMP: I see exactly what you’re doing. You don’t think I do? Nice try. I recognize this question from the Miss Universe pageant six years ago. It is a blatant attempt to bait me. I’m not going to take the bait. I’m not going to answer the questions you ask. I’m going to answer the questions I ask. And my question, which is terrifically insightful, is a two-parter. Part One: What are you, a moron? Yes. And Part Two: Have you ever heard of a little school called Wharton? No.

TRUMP: Ask anyone. I stabilized all the beautiful women of the universe, except one who had an unreported, undocumented rampant glandular problem. So, I think I can stabilize a few countries that have hated each other for centuries. Give me 72 hours. Would it kill you? As for the Muslims, all of the problems disappear if the women, and this is nothing, if the women pop a button or two on that burqa.

TRUMP: This next question comes from a lot of people. A lot of great people who feel left out, who you’ve had to shake hands with against your better judgment. A lot of people are asking how you can use the tax code to your advantage so brilliantly, then fix it so it benefits everyone else. The question is how can one man be so selfless?

TRUMP: Who I am to disagree with you, but I don’t think it’s selfless. I think it’s magnanimous. If you ask anyone, or if you save time and just ask me, they’ll tell you my best quality is my magnanimity. I know my opponent has said my best quality was my temperament, but he’s….

TRUMP: I have a 10-year-old son who I know about. He’s 10. And a 10. You should see him on the computer. The other day, he showed me, I guess they call it a program, which proves that Miss Univision could not fit into the dress, you remember the dress, unless she took the same pay-for-play when she made the Goldman Sex Tape. Not only that, she destroyed a dozen piñatas with a hammer.

TRUMP: Can I add something since my name was mentioned?

TRUMP: It wasn’t, but sure.

TRUMP: If elected, on Day One, Hour One, Minute 42, I will open this nation’s strategic Purell reserves.