In "Divorce," Parker proves she's done with Carrie Bradshaw, but brings none of her old joy to her new series 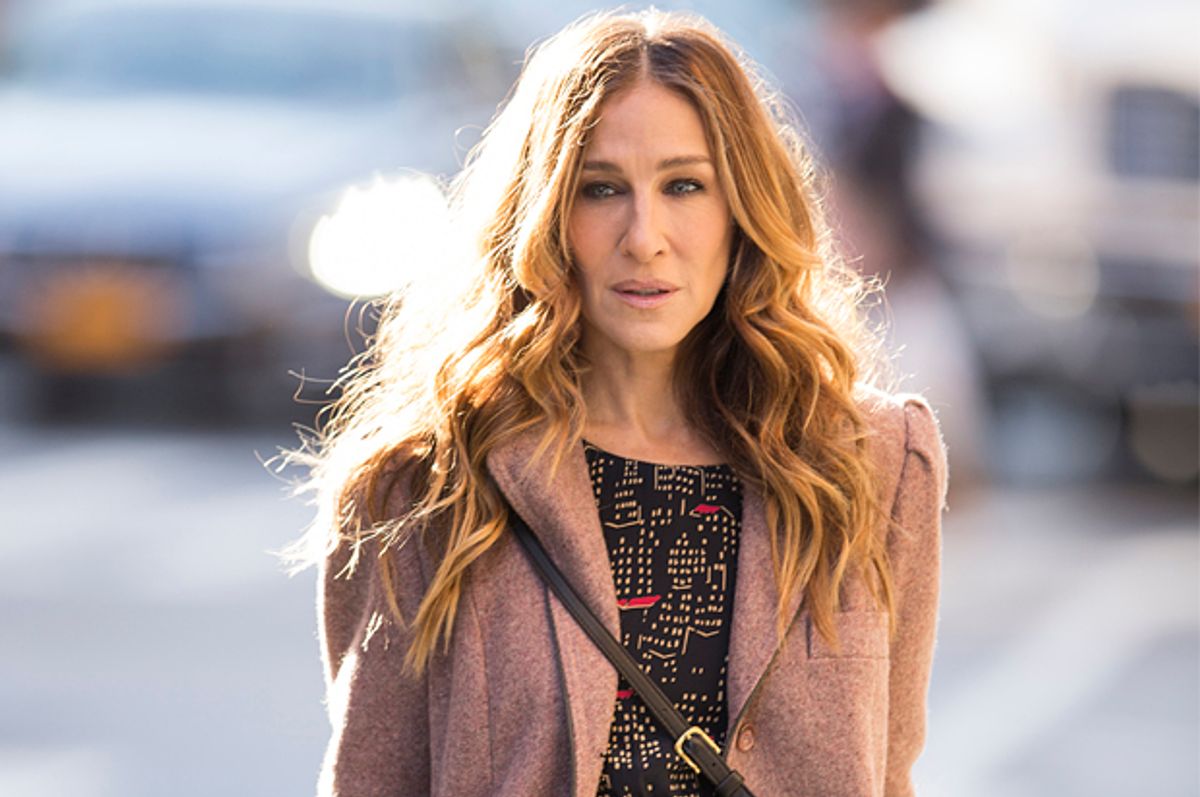 In the intervening years between the end of “Sex and the City” in 2004 and today, women have been bombarded with a raft of conflicting messages about how to be our best selves. We’re advised to prioritize a work-life balance, but we also need to lean in. We can’t have it all, but must always be in the process of transformation while we’re raising children and tending our careers. There’s always a new horizon to reach for, an unfamiliar bend in the river to ford, something else out there, always out there, and it’s never too late to pursue it.

The constant barrage of Oprah-esque dictates can numb a person into a state of hollow ennui — a condition that also falls under that wide umbrella of the midlife crisis, the main propellant of HBO’s “Divorce,” premiering Sunday at 10 p.m.

The title — “Divorce” — may portend a “War of the Roses”-scented conflict, and if the show continues beyond its 10-episode first season, we may get there yet. But the opening episodes careen between pain, discomfort, cruelty and dark, deadpan comedy while portraying the last days of a long marriage, one set in upstate New York during the frigid pre-holiday season.

Doesn’t that sound like a barrel of laughs? No? That’s the core conundrum with “Divorce,” which was created by Sharon Horgan, the star and creator of Amazon’s delightful “Catastrophe.” It would seem that Horgan has a fixation on anxiety-inducing titles, but “Catastrophe” has an upbeat pulse that permeates its humor that is sorely lacking in “Divorce.”

Fewer people are familiar with Horgan than they are with Sarah Jessica Parker, the star of “Divorce,” whose “Sex and the City” character Carrie Bradshaw still casts a long shadow over television, fashion and Parker herself.

Over the last decade the actress has appeared more frequently on fashion pages than in films or television series that weren’t somehow linked to Carrie. Funnily enough, one of her cinematic vehicles, “I Don’t Know How She Does It,” embodied the frazzled quandary of womanhood described above. (It also famously tanked at the box office.)

Parker’s character in “Divorce,” Frances, could not be more different in temperament and outlook than the adventurous sex columnist she played previously on HBO. And yet, the affection for Carrie Bradshaw, and Parker herself, will likely attract audiences to this new gig.

That’s the benefit of being closely associated with an iconic role, but it’s also problematic. Whether viewers are willing to start fresh out of consideration for Parker’s versatility, or whether they reductively think of Frances and her husband Robert (Thomas Haden Church) as what would happen if Carrie and Big moved to the suburbs and began shopping for chunky knits and sensible boots, the answer is the same: Their story is kind of a downer.

The title itself serves as a warning to anyone who has been touched by divorce, whether as a spouse or a child – and, indeed, a lot of us are in that boat. Even Horgan herself admitted in a press conference that her husband was so queasy after viewing the pilot that he couldn’t bring himself to watch more.

Instead, we should view “Divorce” as a commentary on that American misapprehension that confuses settling down with settling — it gives us more to chew on. Or perhaps fewer choking hazards. In its most thoughtful moments, “Divorce" is a reflection of many peoples' feelings upon reaching certain junctures in life and marriage, which is to say that sometimes we open our eyes to a new day and can’t help but wonder how the hell we got there and where the hell we’re going.

Taking that perspective makes the premiere’s inciting moment into the comedy’s most clarifying one, as a nerve-fraying shock inspires Frances to declare to Robert, “I want to save my life while I still care about it!” Parker delivers the line with her hands crossed over her heart and radiating waves of quiet desperation, and in that moment, one might be tricked into thinking an uplifting journey of discovery is about to begin for our girl. If only this were that kind of show.

The joke of “Divorce” is that nothing in the arena of break-ups ever goes as smoothly as one hopes and imagines. The initiator may have a plan, but if it involves other flawed people — like, say, a possible companion who isn’t on the same page (played by Jemaine Clement of “Flight of the Conchords”) there’s no guarantee that it’ll pan out.

The jilted party may still harbor feelings that can’t simply be turned off like a faucet, the flow of which can sour into petty spite in no time at all. Clearly the death of a marriage is a prickly subject to mine for laughs, and Horgan deserves credit for actually managing to find humor in its most awkward moments.

But best scenes in “Divorce” aren’t carried by Parker, which is a shame and an error, considering her role as the center of this off-kilter miniature galaxy. Instead, Church generates most of the comedy in the show’s opening episodes, which is terrific. He’s the kind of likable actor who is perfectly cast in the role of a solid man who’s been wronged, and his signature straight-faced delivery makes Robert enjoyable to watch even when behaving ignobly.

The other heavy lifter here, Molly Shannon, steals the spotlight as Frances’s immodest and selfish friend Diane, a woman so delightfully awful that her terrible behavior makes us more acutely aware of Frances’s graceless suffering. As unbearable as Diane can be, Shannon’s turbulent energy froths up every scene she’s in — which is most welcome, especially to balance out Frances’ suffering.

Frances’ other close friend Dallas (Talia Balsam) exists as a living cautionary tale, having come out of the other side of divorce and widowhood battered, bruised and emotionally closed off. She’s the pal who warns Frances that the fields beyond marriage aren’t as lush and verdant as Frances pictures them to be, and it’s telling that her character is one that a viewer would be least likely to miss, an unfortunate position for an actress of Balsam’s talents to be in.

It’s likely that “Divorce” is on the verge of remarkable transformation and growth, of course. Worthwhile television evolves its themes quickly and mindfully, rewarding the audience’s patience with any ungainly writing at the start by transforming into something audiences neither expect nor see coming. And while nobody is expecting Parker’s new character to channel the same verve as the iconic “Sex and the City” columnist, maybe season one will bring Frances to a place that’s a bit more optimistic and carefree.

Luckily those of us missing the poignancy and heart of Parker’s previous series need only stick around to watch “Insecure” at 10:30 p.m. “Divorce” might not have much of those assets, but HBO’s other new comedy has more than enough to spare.