Storm surge: The benefits of cleanup and recovery after a major hurricane

Major storms inflict immense damage on property and lives, but cleanup and rebuilding can also be an economic boon 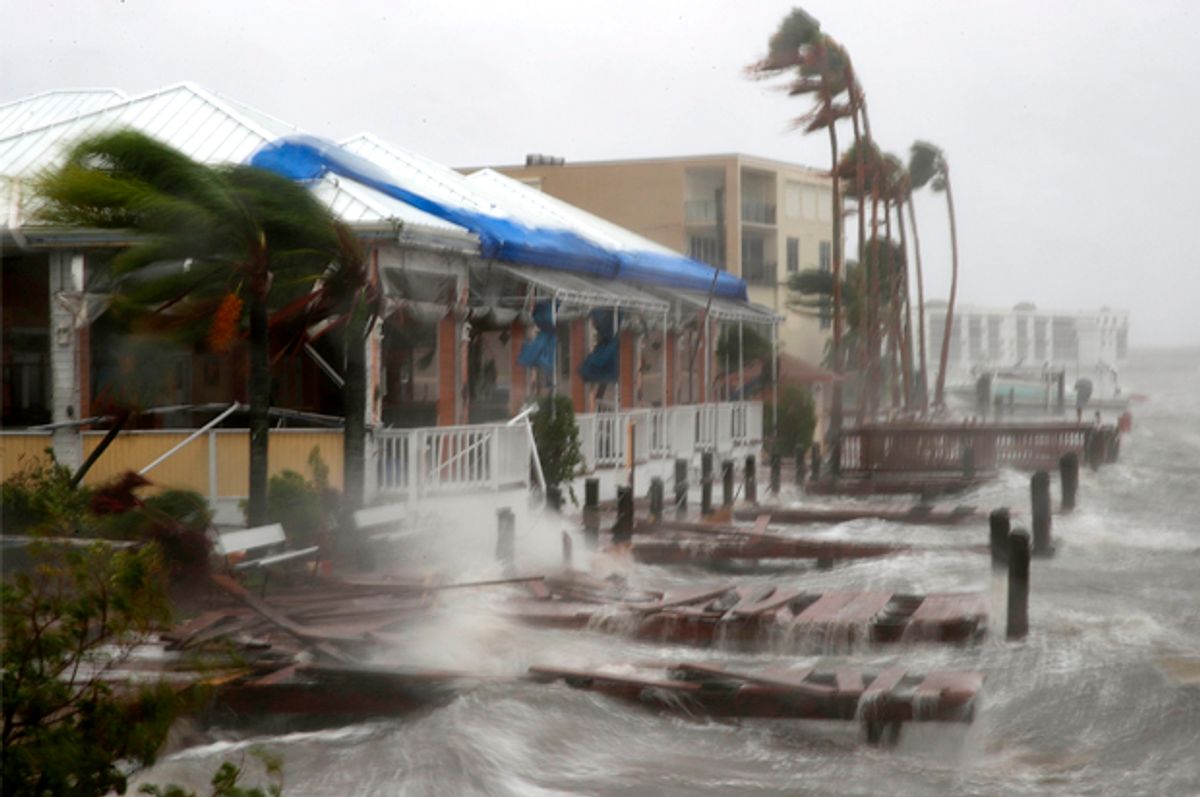 The most powerful hurricane to hit Florida in more than a decade began to lash the state’s east-central coastline about 130 miles north of Miami on Friday morning. Nearly a million people lost power within hours as Matthew, a powerful Category 3 hurricane with sustained winds of 120 miles per hour, spun northward, moving parallel to the coast. By the time Matthew heads back to sea, as it’s expected to do on Sunday, coastal communities in four southeastern states will begin to assess extensive wind, flood and other damage that could put Matthew among the 10 costliest hurricanes ever to hit the U.S.

Early estimates put the damage to this highly developed and populated region in the tens of billions of dollars, and it could rival the $70 billion cost of Hurricane Sandy, which ravaged the eastern seaboard in 2012, according to Moody’s Analytics. More conservative forecasts put the potential losses at around $25 billion, about the same as Hurricane Andrew, the Category 5 storm that sucker-punched the Bahamas, South Florida and Louisiana in 1992 and bankrupted several Florida insurance companies that were overwhelmed by claims. Regardless, by the time Hurricane Matthew dissipates in the Atlantic Ocean next week, it’s likely to be the third most destructive hurricane to hit the U.S., after Hurricane Katrina in 2005, which caused more than $100 billion worth of damage, and Sandy.

The economic impact of hurricanes is devastating, especially to poorer countries such as Haiti, where at least 842 people have been killed and hundreds of thousands displaced. But in wealthier countries like United States the arithmetic of natural disasters comes with some silver linings, at least economically speaking.

A 2008 study published by the Institute for the Study of Labor in Bonn, Germany, looked at the impact of Gulf Coast hurricanes on economic growth. It found that hurricane damages are partially offset by the economic benefits of having so many things in need of repair and the resources to repair them.

“The subsequent receipt of disaster assistance, clean-up and recovery activity, and the production of replacement capital will serve to act as a counterweight to any losses,” writes the study’s author, Eric Strobl. The researcher concluded that major hurricane strikes drive down U.S. economic growth by 0.8 points in the wake of the storms. But this loss is partially offset by growth of 0.2 points from recovery efforts.

In other words, about a quarter of the value of a storm’s economic damage is recovered by jobs created in the recovery efforts, the influx of recovery aid and insurance payouts, as well as the increase in demand for building materials and the purchase of goods lost in the storms.

Earnings from major retailers help to confirm this.

“For the third quarter and first nine months of fiscal 2004, we experienced comparable store sales increases in building materials due in part to the impact of several hurricanes in the Southeastern United States,” Home Depot, the world’s largest home improvement retailer, said in a quarterly earnings report in 2004 after Hurricanes Jeanne, Charley, Frances and Ivan inflicted about $50 billion in damages to the Gulf Coast region, mostly in Florida. Home Depot’s average per-customer sale receipt also hit a record high that quarter, while building materials had the strongest sales increase. Home Depot’s rival Lowe’s, too, attributed a jump in sales toward the end of 2005 to “the three hurricanes that hit the Gulf Coast and Florida,” referring to Hurricanes Katrina, Rita and Dennis.

Of course, while contractors and retailers can benefit from the storms, it comes at a cost to the underwriters of storm damage repair costs, including federal and state assistance and insurance payouts. Insurers paid out about $28 billion in claims after Hurricane Sandy. Payouts for Katrina topped $40 billion. And the federal National Flood Insurance Program, which extends coverage to homeowners when private insurers won’t, has itself paid out tens of billions of taxpayer dollars over the years, including $16 billion for Katrina alone.

By next week the U.S. will have a better idea of the extent of the damage Matthew has inflicted. By the end of the year we’ll have a better picture of how much economic activity is spurred in the storm’s wake thanks to the influx of recovery funds and the rise in demand for labor and goods. It’s of little comfort to millions impacted by these storms — especially right now — but recovery efforts do bring their own economic benefits, hopefully sooner rather than later.