Technocratic for the people: What Hillary Clinton gets wrong about Bernie Sanders' political revolution 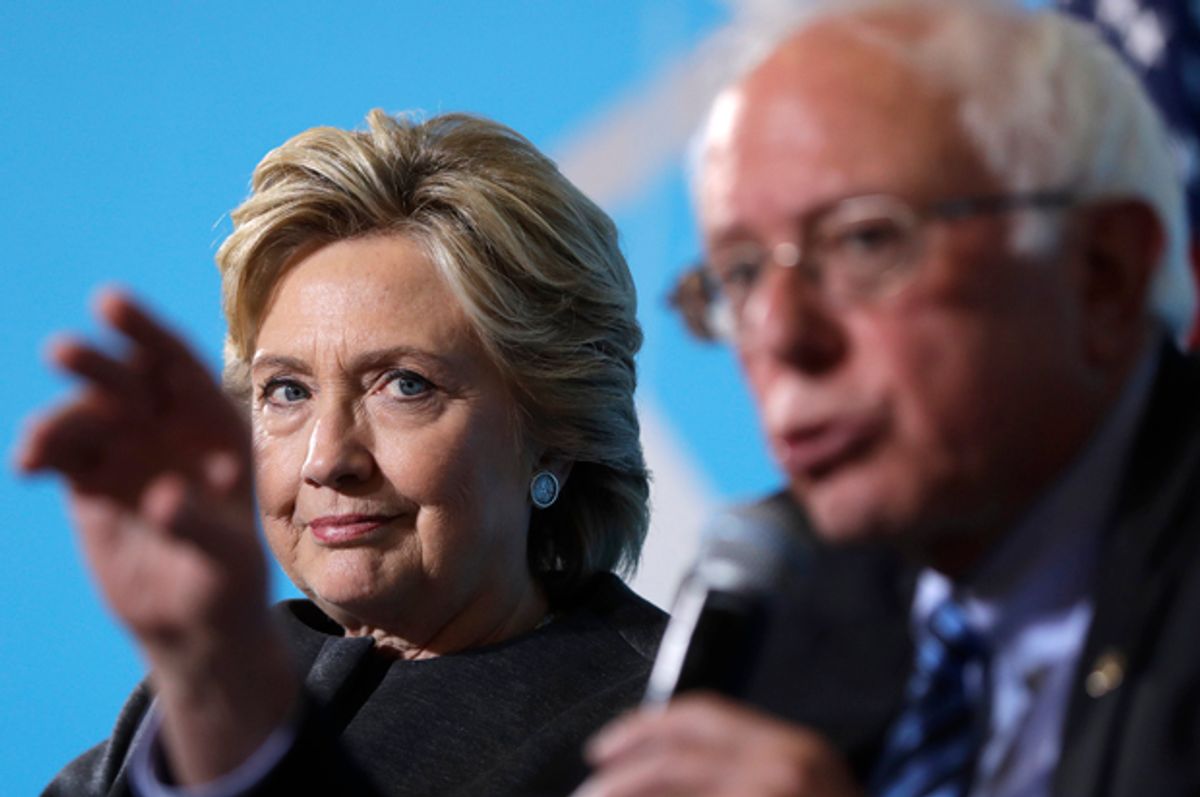 Facebook
Twitter
Reddit
Email
view in app
Although the recently leaked audio of Hillary Clinton speaking to campaign donors back in February about her rival Sen. Bernie Sanders (I-Vt.) and his basement-dwelling millennial supporters is hardly as damning as some have suggested, it does serve as an important reminder of the sharp divisions that surfaced during the Democratic primaries between progressives and Democratic partisans, and why many Sanders supporters remain deeply skeptical of Clinton one month before the presidential election.
Clinton, who admits in one of the soundbites to occupying “the center-left to the center-right” of the political spectrum, comes across as mildly condescending — yet also sympathetic — to Sanders’ millennial base. None of what she says is at all surprising, and most of her commentary is accurate when it comes to understanding why so many millennials supported the democratic socialist.

“Some are new to politics completely,” says Clinton. “They’re children of the Great Recession. And they are living in their parents’ basement. They feel they got their education and the jobs that are available to them are not at all what they envisioned for themselves. And they don’t see much of a future. … So I think we should all be really understanding of that and should try to do the best we can not to be, you know, a wet blanket on idealism.”

Clinton, ever the realist, goes on to call Sanders’ entire campaign a “false promise,” and mockingly remarks that she is still trying to figure out what he means by a "political revolution."

Eight months later, many people continue to misconstrue what Sanders meant by calling for a political revolution, and assume — like Clinton — that the senator’s campaign was pie in the sky idealism at best, demagoguery at worst.

Of course, while Sanders had a historic run, he didn't win the nomination — and many of his younger supporters remain bitter about this fact (especially after it was revealed that the DNC has been pulling for Clinton behind the scenes). Recent polling shows that Clinton continues to be very unpopular with millennials, albeit not quite as unpopular as the Donald, whose blatant xenophobia and sexism are repellent to most people under 30. Millennial voters (18-29) dislike both Clinton and Trump so much that only 41 percent of them say that they are certain to vote in November, according to an ABC/Washington Post poll from last week. The survey also found that under-30 voters prefer Clinton over Trump by only 2 points, compared to a 30-point preference for President Obama over Mitt Romney in 2012.

So did the Sanders campaign simply bring about more disillusionment and cynicism among young voters? And was the senator making false promises that he knew he couldn’t keep?

If you assume that Sanders was running to further his own political career, this might seem plausible enough. But this assumption is at odds with everything we know about Sanders and everything that he said during his presidential campaign. Consider one of his favorite aphorisms: “Change never takes place from the top down, it comes from the bottom up.”

This is essentially what Sanders meant by a political revolution, and it’s a message that has long been espoused by those on the left, from socialists and anarchists to unionists and civil rights activists. Put simply, political and social change is in the hands of the people, and no meaningful or radical reform will happen as long as the populace passively accepts the status quo and assumes that revolving-door bureaucrats and billionaire-backed politicians have their interests at heart.

This is hardly idealism; it’s reality. Sanders never made false promises or sold himself as a savior. In fact, he made a point of telling his supporters the very opposite. “If there is any person here, any person here that thinks I'm coming to you as some kind of savior, that I'm going to do it all — all myself, you're wrong,” said Sanders at a campaign rally in May. “No president, not Bernie Sanders or anybody else, can do it alone. We don't need a savior. We need a political movement with millions of people.”

Hillary Clinton takes more of a top-down approach to politics, and gladly stands in the political center (leaning more toward the left or right depending on who she’s talking to). The former secretary of state considers Sanders’ populism naive and unrealistic, and accepts the technocratic method that has dominated the Democratic Party for the past 30 years.

But what exactly has modern technocratic liberalism achieved? Some of the Democratic Party’s most important achievements — most notably the Affordable Care Act — are also some of the most jumbled, bureaucratic and corporate-friendly pieces of legislation in modern history (Bill Clinton slipped up a few days ago when he called Obamacare the "craziest thing in the world," which he has since walked back). A fine example of the technocratic liberal is MIT professor and Obamacare architect Jonathan Gruber, who said in 2014 that "Lack of transparency is a huge political advantage,” and that “the stupidity of the American voter” was critical for ACA to pass.

Of course, this kind of convoluted legislation, watered down by special interest demands and intentionally opaque, is almost inevitable in the current political system. And this is exactly why Sanders was calling for a popular movement to combat the status quo. It is naive to think that revolving-door bureaucrats and politicians desperate for campaign cash would ever agree to radical reform without a popular movement demanding it from below. With this in mind, is it not more accurate to describe Sanders as a realist than a utopian?