Stop believing this myth: No, Native Americans are not "anti-science"

American Indians have always been fluent in scientific thought and practice, contrary to damaging misconceptions 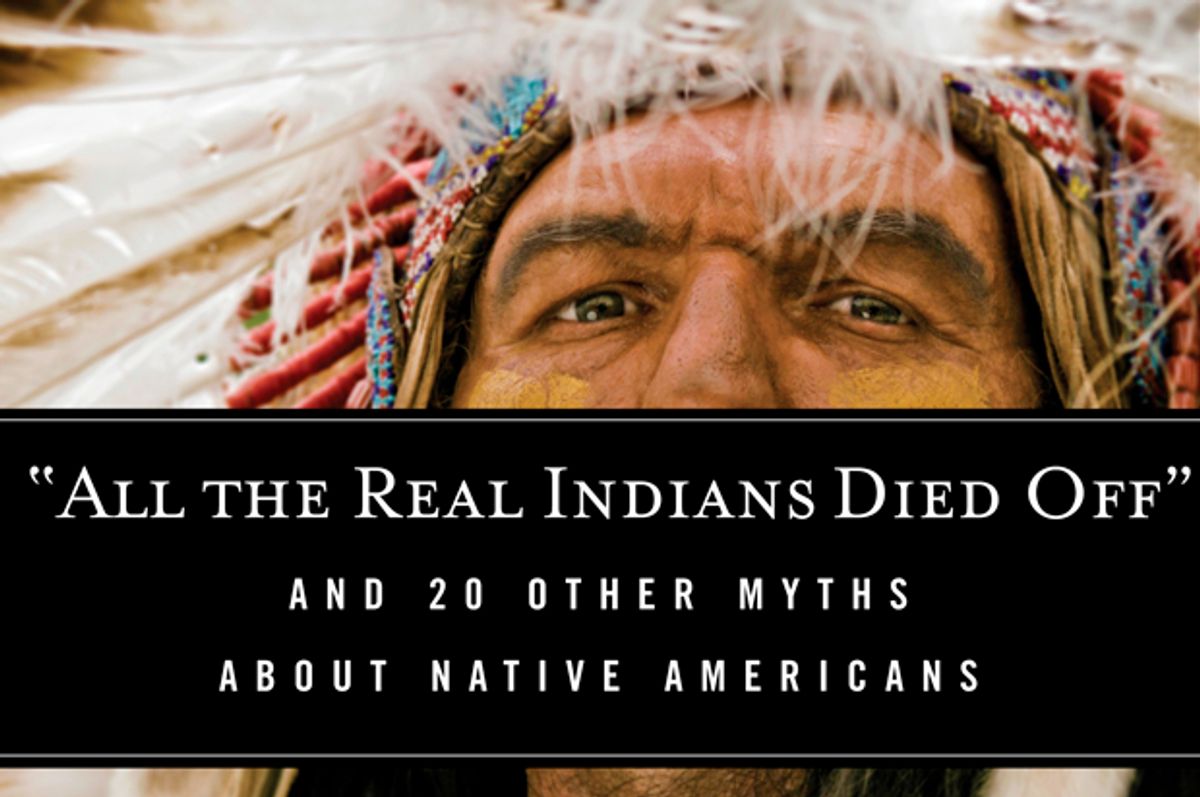 Excerpted from “'All the Real Indians Died Off': And 20 Other Myths About Native Americans" by Roxanne Dunbar-Ortiz and Dina Gilio-Whitaker (Beacon Press, 2016). Reprinted with Permission from Beacon Press.

Few people in the world have more reason to be anti-science than American Indians, given the history of the way science was used in service of U.S. political agendas to dispossess them of their lands and subjugate them. It was a point alluded to in 2012 by Jason Antrosio, a professor of anthropology at Hartwick College, in a blog on an anthropology website. Specifically, Antrosio expressed his understanding about why many Native Americans refuse to participate in genetic studies. He was responding to a post on another anthropology blog in which the author, writing under the pseudonym Dienekes Pontikos, claimed that the “big hole” in genetic sampling of Native groups in the United States is due to “petty identity politics contra science.” Echoing this, a commentator at the Discover magazine blog wrote that “Native Americans are not special snowflakes” (because they are not the only ones who have been subject to historic injustices) and that “holding a grudge is no excuse for anti-science.” The arrogant condescension of these and other science writers reflects a belief that Indigenous Americans somehow owe their DNA to genetics studies and that when they disagree, they are automatically deemed to be against science.

While experience has taught Native Americans that there are very good reasons to be leery of genetic testing, flippant statements about being anti-science are at best unfair and at worst not just incorrect, but also inflammatory and provocative. These statements are irresponsible and only build obstacles between Native peoples and Western-based science communities, and genetic science is only the most recent realm to exhibit such anti-Indian antagonism. There is an abundance of evidence embedded in Native cultures — and scholarship to back it up — that is the opposite of these vitriolic claims, highlighting the fact that Native people have always had their own forms of science and modes of knowledge production, even if they aren’t recognized as such by positivist, Cartesian-based Western systems.

One of the biggest challenges for Indigenous people in North America (and elsewhere) is being seen by dominant populations as peoples with legitimate systems of knowledge, a problem thanks to centuries of white supremacy that constructed Indigenous peoples as inferior in every way. As one of the preeminent scholars on Native science, Gregory Cajete, points out, elders, activists, scholars, and intellectuals have told a different story. The word “science” as it is commonly used refers narrowly to complex, specialized, and mechanistic systems of measurement to understand what we call reality. Literally translated, however, science refers simply to systematized knowledge. In this sense, all Native peoples have their own structures of empirically based knowledge. From their observations they developed technologies that made their lives easier, in characteristically sustainable ways. The following are five of the most ancient, well known, and influential of those Indigenous technologies.

Astronomy is one of the oldest forms of science. Consistent with Native worldviews that recognized the interdependence of all life, even the stars and other celestial bodies were seen as relatives who guided the lives of the people in tangible ways. The movement of celestial bodies could determine ceremonial cycles and festivals, or war and other events of political or religious significance. They also figure prominently in the creation stories of many peoples. Like peoples all over the world, Indigenous peoples read the heavens to keep track of time.

Calendar systems like Plains peoples’ winter count and other forms of pictographs, drawings, and rock art (such as those found throughout the American Southwest and the painted caves of the Chumash) were records that allowed people to maintain important traditions year after year. Some, like the Nazca geoglyphs in Peru, are thought to possibly be manifestations of geometry and mathematics. One of the most pragmatic applications of astronomical knowledge was its ability to guide cycles of planting and harvesting.

Many Indigenous cultures in pre-contact North and South America were known to have complex irrigation systems that could sustain communities of thousands of people. Archaeological evidence from the Hohokam culture (ancestors of the Tohono O’odham people in today’s Arizona) and Peruvians in pre-Incan and Incan times suggests irrigation technology that includes canals, pipelines, aqueducts, dams, reservoirs, and check valves dating back to 300 B.C., far earlier than European technological advances.

Contrary to the popular colonial myth of Indians as nomadic wanderers, many (if not most) Native nations were agriculturalists of the highest degree. What we today call “permaculture” is, as Cajete wrote, “in reality applied Indigenous science.” Indigenous knowledge of bioregional sustainability sometimes even included game management. Great Lakes peoples cultivated rice, cattails, and pond lilies. All over North and South America, Indigenous peoples experimented with farming techniques, resulting in many of the world’s most widely consumed food crops today. For example, Iroquois and other Native North Americans planted the Three Sisters — corn, beans, and squash — together to ensure long-term soil fertility and maximum output. Growing these crops in small mounds prevented soil erosion compared to linear plowing, and the technique was adopted by some European immigrant farmers.

Furthermore, Native peoples practiced hybridization techniques long before researchers like Gregor Mendel and Luther Burbank popularized them, resulting in many varieties of corn, chilies, beans, and squash. And the so-called Mississippian Mound Builders in the U.S. South, the predecessors to today’s Cherokee, Choctaw, and other Southeast peoples, have long been the subject of archaeological and anthropological study in complex pre-Columbian civilizations. Cahokia, located in today’s Illinois, is exemplary. A city at the time larger than London, it is thought to have supported a population of between twenty thousand and fifty thousand people at its height in around 1250 to 1300 because of the ability to produce surplus food.

In North America after the last ice age, Native peoples had no use for the wheel because species that might have been draft animals had gone extinct. But Native Americans were highly mobile and constructed a network of trails that are still evident today. What became pioneer wagon trails such as the Santa Fe and Oregon Trails, the Central and Southern Overland Trails, the Wilderness Road (through the Cumberland Gap), and the Natchez Trace are still visible on maps as highways.

In Mexico, the Mayans built a network of roads centered in the Yucatán city of Cobá around AD 623. These roads were remarkable for their rubble-filled raised construction that ranged from two to eight feet above ground and were lined with limestone concrete. Roads were as long as sixty-two miles, and archaeologists have found a five-ton cylindrical roller for packing the ground, similar to steamroller equipment used today.

In South America, the Incas constructed a 24,000-mile complex of roads centered around the city of Cuzco, roads that extended as far away as the Amazon and Argentina. These included suspension bridges, solid bridges with stone piers and wooden decking, and even tunnels cut through solid granite. Bridges crossed gorges, marshes, and other seasonally wet areas and incorporated culverts to prevent water from flooding them.

Wherever there was water, Indigenous peoples developed watercraft. In North America, canoes were common among coastal, lake, and river populations. Great Lakes peoples built bark-covered canoes, and Arctic peoples constructed sealskin kayaks. Pacific Northwest peoples constructed elaborate dugout canoes big enough to hold as many as 20 people and thousands of pounds of cargo, and their maritime history is among the oldest in the world. The Chumash and Tongva peoples of coastal Southern California were known for their tomol, a sewn plank canoe that is considered one of the oldest forms of seafaring craft in North America. It is believed by some scholars to be influenced by ancient Polynesians. Recent discoveries on Santa Rosa Island off the coast of Southern California confirm the ancient ocean-navigating abilities of the Chumash people dating back at least eleven thousand years, far predating the seafaring cultures of ancient Egypt, Europe, and Asia.

As is true for peoples globally, the technological innovations of ancient Indigenous peoples were grounded in particular worldviews. They were formed by their experiences within specific places over millennia. Scholarship from Indigenous peoples everywhere emphasizes that there are different ways of knowing the world, beyond the dominant educational paradigms that privilege Eurocentric philosophical foundations. These foundations can be traced to (among other things) Judeo-Christian traditions that construct and continually reinforce social hierarchies and views through a lens of domination and alienation from the natural world. Indigenous knowledge construction broadly speaking, on the other hand, rests in a view of the world grounded in relational thinking, respect, and reciprocity, which translates as a sense of responsibility to life in all its many and diverse forms. Scholars actively assert these differences within contemporary academic discourses — even within the hard sciences — through associations, curriculums, and educational approaches that reflect these values.

Take as an example the American Indian Science and Engineering Society (AISES). Founded in 1977, the group sees no inherent conflict between American Indian values and those embodied in the sciences. Quite the opposite, in fact, says Cherokee engineer and educator George Thomas:

I feel [science] is actually a natural thing for Native Americans because of our relationship to the Earth, our spiritual beliefs, and respect for The Creator’s great laws. Science is really just a way of understanding what The Creator has put here. It’s not just an academic pursuit for us; science and theology are one and the same. It is also a mistake to assume that technology is exclusive to one culture or another. Take for example the teepee. It’s a very aerodynamic shape that can withstand high winds and snow loading, with strong convection heating and cooling properties.

According to the AISES mission statement, the group sustains 186 chartered college and university chapters, 14 professional chapters, and 170 affiliated K–12 schools supporting American Indian students in the disciplines of science, technology, engineering, and math (STEM). Similarly, the Society for Advancement of Chicanos/Hispanics and Native Americans in Science (SACNAS) is a collaboration dedicated to supporting the educational success of Hispanic and Native American people in science.

Native American perspectives have woven themselves into college-level education throughout the United States as evidenced by the Native American Science Curriculum. The curriculum engages Indigenous research methods that are applicable in tribal contexts such as resource management, while also working to break down derogatory stereotypes and biases. And innovative projects at the K–12 level are infusing Indigenous traditional environmental knowledge (TEK) into conventional Western-based environmental education. With a multi-million-dollar grant from the National Science Foundation in 2010, for instance, the Indigenous Education Institute partnered with the Oregon Museum of Science and Industry to create a traveling exhibit called “Generations of Knowledge” that blends TEK with Western science, showcasing “culturally relevant contexts as valuable, complementary ways of knowing, understanding and caring for the world.”