Donald Trump's bizarre parade of Hillary Clinton hate: That debate summed up everything wrong with his campaign

From the press conference with Clinton accusers to repeated threats to jail Hillary, it was Trump at his worst 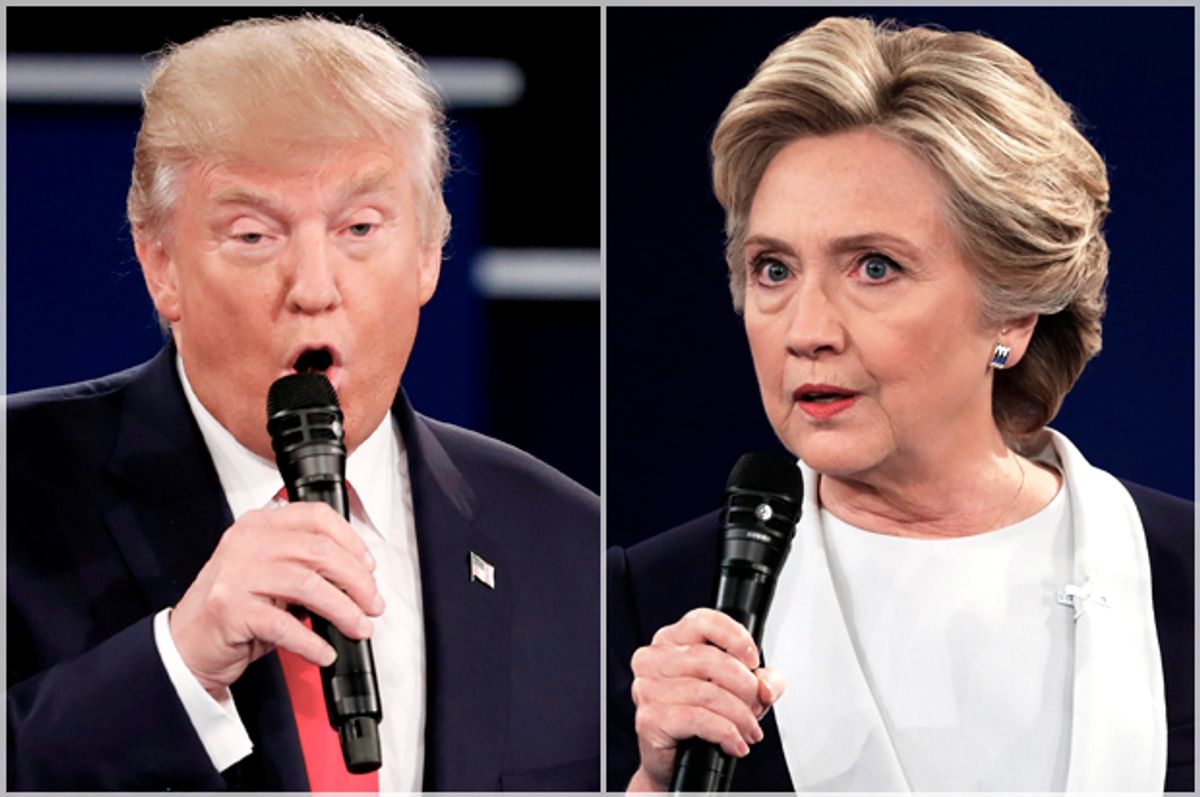 I don't think there's ever been a more highly anticipated presidential debate than the one that happened Sunday night in St. Louis. The campaign of Republican presidential nominee Donald had been drastically losing altitude since the first debate and the week after when he proved that he was unprepared, unknowledgeable and unfit for the job. Everyone wondered if he could pull out of it. And then Friday happened. That tape showing Trump coarsely bragging that he could kiss women against their will and "grab 'em by the pussy" sent the campaign into a full tailspin.

By Sunday, GOP leaders were defecting en masse, with many demanding that Trump withdraw from the race. Nobody knew if he would broach the topic of the tape or fulfill his threat to go after the Clinton scandals of the '90s in the debate, now that new and disturbing revelations about his own behavior had been seen by millions.

Well, he did. Just before the event he held a "press conference" in what appeared to be an airport hotel conference room with four women who said Democratic presidential nominee Hillary Clinton had viciously attacked them for accusing her husband of sexual harassment and assault. (I'm not going to litigate those cases here, but suffice to say that they were part of independent counsel Ken Starr's thorough investigation and the details are easily accessible.) In what looked disturbingly like a North Korean hostage video, the women spoke about their complaints against Clinton while the man who had just been revealed on tape saying that he liked to grab women "by the pussy" sat in the middle.

It was, to say the least, a bizarre tableau that electrified the political world and signaled that Trump planned to take the gloves off in the debate. (Robert Costa of The Washington Post reported late last night that the campaign had planned to put the women in the family box and confront Bill Clinton on national TV until the debate commission pulled the plug.)

Trump was asked about the tape right off the bat and he dismissed it as "locker room talk," then did an impressively weird pivot to ISIS' chopping off heads. It didn't improve from there. Trump stalked Clinton around the stage, constantly sniffing for emphasis, whining to the moderators and basically reprising his grotesque caricature of a presidential candidate on the national stage one more time. For reasons that remain obscure, many pundits declared that he had performed well, suggesting that unless his head had twirled around on his shoulders and he vomited Andersen's split pea soup all over the stage there was no way he could have failed.

He did come close to an "Exorcist" moment at one point, in claiming that Clinton had stolen the election from Sen. Bernie Sanders and saying, “I was surprised to see him sign up with the devil.” He even said she had "tremendous hate in her heart." But then Trump made a specific threat that finally got the attention of the political world. He said:

I’ll tell you what, I didn’t think I’d say this and I’m going to say it and hate to say it: If I win, I’m going to instruct the attorney general to get a special prosecutor to look into your situation because there’s never been so many lies, so much deception.

Clinton said a few minutes later: “It’s just awfully good that someone with the temperament of Donald Trump is not in charge of the law of our country,” to which Trump interjected, “Because you’d be in jail.”

A lot of people are horrified by this statement and rightfully so. Former Attorney General Eric Holder sent out this scathing tweet:

Threatening to jail your political rivals is something you don't see in advanced democracies. That's the way it's done in banana republics and totalitarian dictatorships, and it says everything you need to know about Trump.

But I cannot help but wonder, what did people think all those "Hillary for Prison" T-shirts and "Lock her up" chants at the Republican National Convention were about? Did they not hear the speeches by former prosecutors Rudy Giuliani and Chris Christie "making the case" to put Hillary Clinton behind bars?

If this is really the first time that people have heard Trump saying this, they haven't been listening. I wrote about this last June for Salon, quoting Trump saying these words at a rally in San Jose, California:

I used to say, leave it up to the lawyers. I have watched so many lawyers on so many different networks. I have read so much about the emails. Folks, honestly, she’s guilty as hell. She’s guilty as hell. . . . It’s called a five-year statue of limitations. If I win . . . everything’s going to be fair but I’m sure the attorney general will take a very good look at it from a fair standpoint, OK? I’m sure. I think it’s disgraceful.

He told John Dickerson on "Face the Nation" in June:

In February, Trump had this exchange with Sean Hannity on Fox News:

Hannity: If you win, you’ll have an attorney general. The statute of limitations will not have passed.

Trump: Six years, actually. Well, look, you have no choice. We have to solve all sorts of problems. In fairness, you have to look into [Hillary Clinton]. Maybe she can prove her innocence, but it just seems to me that I think the public knows everything that they are going to know.

One of Trump's major campaign promises, as he put it last November, is "to look into that crime very, very seriously, folks." The fact that so few people heard this or noticed it until last night's debate is astonishing. It's Exhibit A of Trump's authoritarian impulse and when people ecstatically chant, "Lock her up," this is what they're talking about. It's never been a joke. The good news is that people have finally stopped laughing.