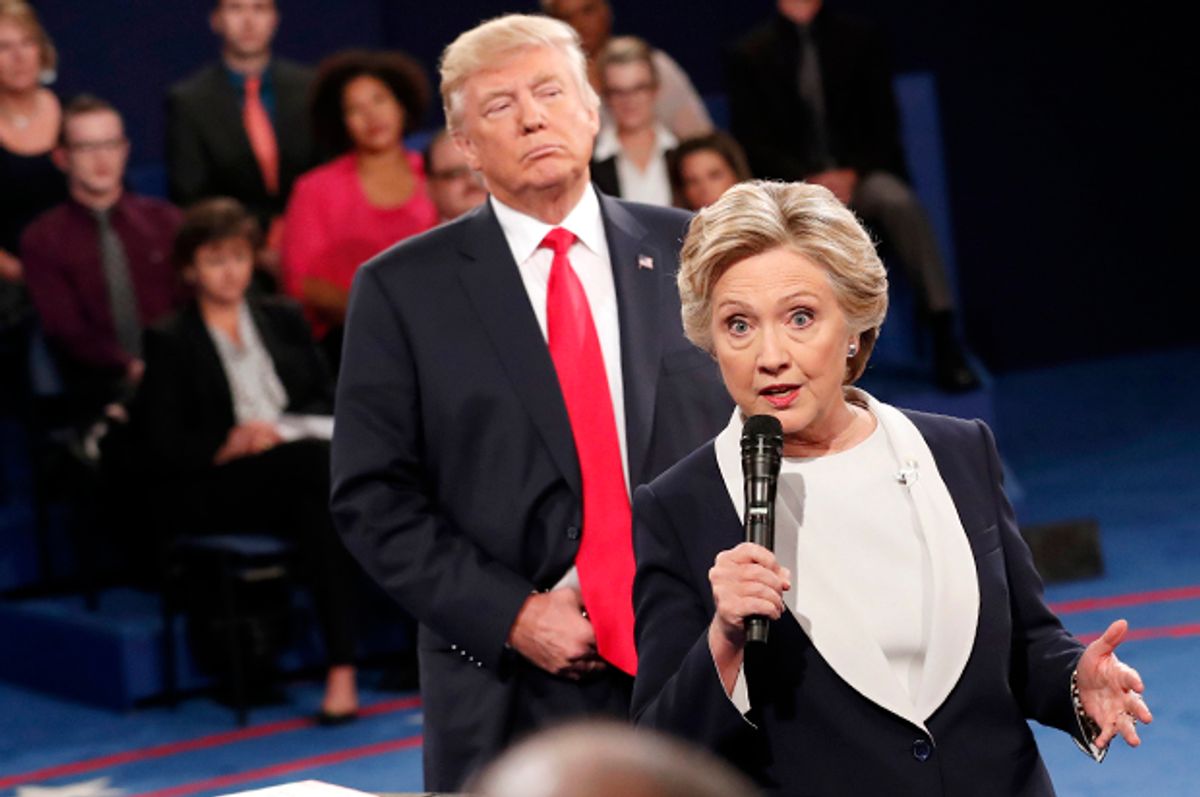 The second presidential debate of the 2016 election is over, and if whatever cosmic force governs the universe is merciful, there will not be a third. I lost count pretty early on of the ways this campaign ritual sank into ridiculous farce, thanks to the determined efforts of Donald Trump. Following the release of a recording of Trump boasting of how easily he can leverage his celebrity to sexually assault women, the Republican nominee found himself completely unmoored from any impulse toward moderation.

Again, it’s tough to pick a nadir, but if we’re viewing this travesty through the lens of “how much damage was done to democratic norms,” then there’s a clear winner: Trump’s pledge that, as president, he would instruct his attorney general to appoint a special prosecutor to investigate his rival Hillary Clinton and throw her in prison.

That’s flat-out authoritarian. It’s the sort of thing you see in fraudulent democracies and dictatorships where political opposition to the head of state is punishable by imprisonment.

“Lock her up” has been a favorite chant of Trump supporters at his rallies, but the candidate himself had never really signed on to that sentiment until recently. After The New York Times broke news that Trump had quite likely not paid income taxes for nearly 20 years (news Trump himself appeared to confirm during the debate), he announced at a Pennsylvania rally that “she should be in prison.”

And at Sunday night’s debate, in the aftermath of the sexual-assault tape, Trump promised to do everything he could as president to make sure Clinton goes to jail:

And I’ll tell you what. I didn’t think I’d say this, but I’m going to say it. And I hate to say it. But if I win, I am going to instruct my attorney general to get a special prosecutor to look into your situation. Because there has never been so many lies, so much deception, there has never been anything like it. And we’re going to have a special prosecutor.

“It’s just awfully good that someone with the temperament of Donald Trump is not in charge of the law in our country,” Clinton said in response.

“Because you’d be in jail,” Trump shot back.

Then there’s the “temperament” issue that Clinton brought up, which is actually very important. Remember that Trump started with the “lock her up” stuff only after The New York Times dropped a bomb on his campaign. And his promise to use the Justice Department to exact retribution on his political adversary arrived in the immediate aftermath of another massive jolt to his campaign.

Trump would receive a lot of bad news as president; it is a defining characteristic of the job. It should terrify everyone that his reaction to bad news is to issue threats against his political opponents and to promise to use the power of his office to carry them out.

Lastly, let’s not pretend for a second that Trump would not make good on this threat or that he’d staff his government with people who wouldn’t follow him down this corrupting path. Let’s say, for example, that Trump toady and former federal prosecutor Rudy Giuliani is tapped as attorney general. This is the same Giuliani who, when asked if Clinton should have been imprisoned, said, “She lied about it over and over again and she destroyed 34,000 emails she had no right to destroy. I have convicted people on 20 percent of that evidence.”

Trump surrounds himself only with people who bend themselves to his will. There’s every reason to believe he would staff up his administration with enablers who would prioritize his diktat over the health of our democratic institutions.

The Republican Party and the conservative movement that support Trump should be at least somewhat attuned to how dangerous it can be for a president to use the power of the office to punish political enemies. They have spent the past few years convinced (against all evidence) that President Barack Obama had the IRS target and harass Tea Party groups applying for nonprofit status and they’ve been howling bloody murder at this imagined abuse of authority.

A lot of those same people will praise Trump and celebrate his promise to abuse the power of the presidency.