Hillary Clinton can't win the debate: She showed grace and intelligence, but he won because he didn't grab anyone's junk

The debate showed that Clinton is eminently qualified and Trump is a clown. Why is anyone confused about this? 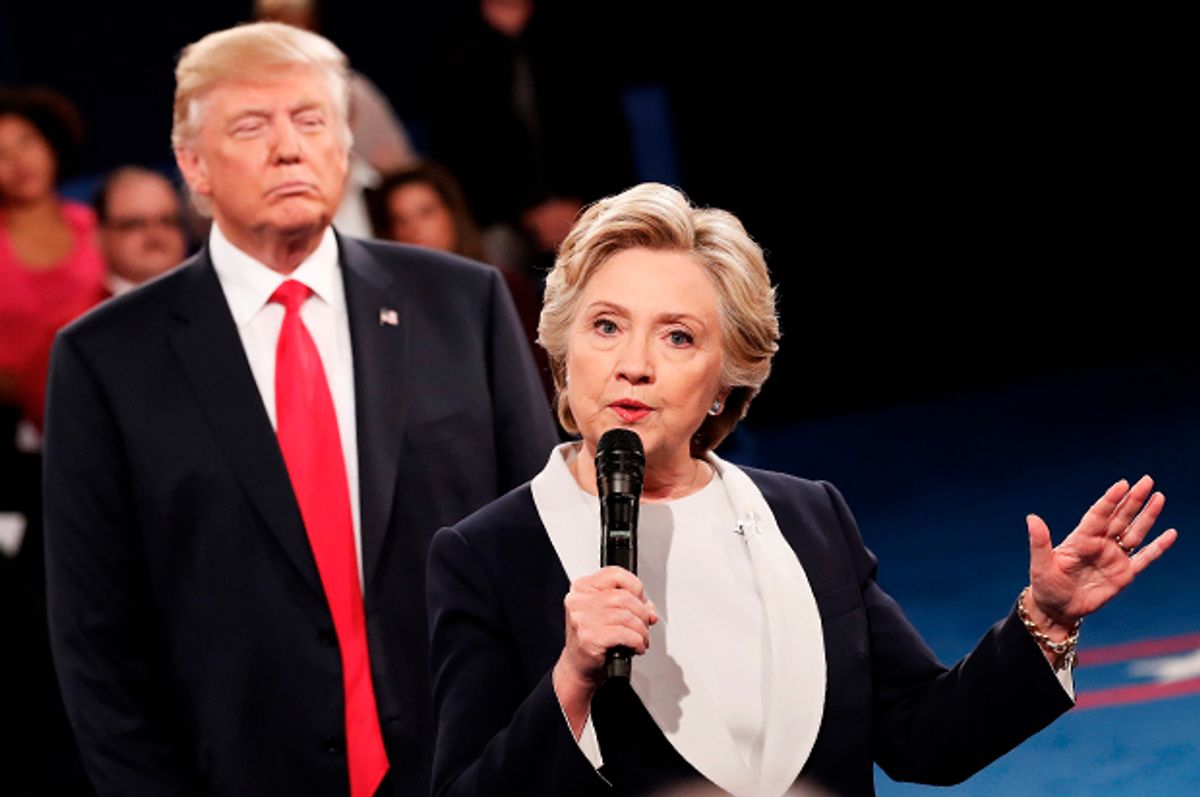 Democratic presidential nominee Hillary Clinton held it together during Sunday night's debate, speaking intelligently and passionately about policy, despite having to endure her rival Donald Trump and his team trying to deflect his on-tape admission of sexual assault by throwing two decades of right-wing conspiracy theories about her husband at her for two days.

Trump, on the other hand, made it through a 90-minute debate without grabbing anyone's pussy, though he stood menacingly close enough to Clinton that there were some concerns. Sadly, this plus his ability to get a little closer to former vice presidential candidate Sarah Palin levels of coherence — though still falling short of the mark — was enough to score Trump rave reviews from some corners and even some claims that he won the debate.

But make no mistake: By any reasonable measure, Trump lost that debate. In many ways, his performance was worse than the first time around. Trump repeatedly exposed that he knows less about good governance than a 5-year-old who has watched some "Schoolhouse Rock" videos.

Take, for instance, this bit of babble from Trump:

One of the greatest provisions for people like me, I give up a lot when I run because I knock out the tax code. She could have done this years ago. She's a United States senator. She complains that Donald Trump took advantage of the tax code. Well, why didn't she change it? Why didn't you change it when you were a senator? The reason you didn't is all your friends take the same advantage that I do.

Well, no. The reason she didn't do it is literally because, as a senator from New York, she didn't have the power to do it. Which led to Clinton having to explain how our Constitution works to Trump because he doesn't understand it.

Clinton: Because I was a senator with a Republican president. I will be the president.

Trump: You could have done it if you were an effective —

Anderson Cooper: Please allow her to respond. She didn't interrupt you.

Clinton: Under our Constitution, presidents have something called veto power.

Repeatedly, Trump spoke about Clinton as if she's been the queen of America for 30 years, ruling with what he seems to believe is absolute authority. He held her solely responsible for the Iraq War, not seeming to understand that it was actually President George W. Bush that made the decision to invade — a decision Clinton warned against at the time. He repeatedly blames her for the formation of ISIS.

Trump's sense that Clinton has had almost godlike powers for decades — and simply has declined to use them for good — reached epic proportions during this debate. Take, for instance, this rant:

If she had a problem for 30 years, she's been doing this, Anderson. I say it all the time. She talks about health care. Why didn't she do something about it? She talks about taxes. She doesn't do anything about anything other than talk. With her, it's all talk and no action.

Clinton, of course, was the head of the task force that tried to pass health care reform in the '90s and, when that effort failed, she worked to pass Children's Health Insurance Program, a program that obtained health insurance for 8 million children. She did this as first lady, which isn't even an elected office. As she noted, there's a lengthy record of her votes and her work on a series of issues. In a sense, this is classic Trump projection because he literally was doing absolutely nothing on any of these issues while Clinton was literally and demonstrably working her ass off on this stuff.

This matters. Trump is a walking ignoramus of the first order, the kind of man who thinks he can sit around doing nothing for decades, walk into a room and face someone who has actually done the work and successfully accuse her of being lazy and stupid. That is terrifying behavior. This debate was a reminder that these two shouldn't even be in the same room together.

As satire of what women have to put up with to convince the world they're competent, this is too on the nose. But folks, this is real life.

Trump's endless babbling about the Syrian war, in particular, was frightening, as it became immediately clear that he thought all he needed to bullshit his way through this was just memorize a few geographic names and then just coast through on a sea of rock-bottom expectations. Even then it didn't really work and his face got redder and redder as he seemingly grasped that everyone had, for a brief and shining moment, remembered that this guy is a reality TV star who somehow lost a billion dollars running a casino.

The answers to the questions about the Supreme Court were particularly telling. Clinton gave a thorough, detailed, intelligent response that hit on many issues: campaign-finance reform, voting rights, marriage equality, abortion rights, labor and environmental issues versus corporate profits.

Trump, on the other hand, vaguely promised to appoint someone "in the mold of Justice Scalia," but failed to explain what that meant. He simply said his short list of judges had been "very beautifully reviewed by just about everybody," declining to say what that meant. Sadly, there were no follow-ups to find out what specific qualities of Scalia he liked, much less decisions Scalia had made that Trump was hoping to repeat. Does anyone doubt that he would have stumbled around, unable to answer such a question?

This is the presidency we're talking about here, even though Trump has successfully convinced many this is a game show called "How Big of a Dumb Asshole Can You Be?"

The last question — one of those tedious softballs asking the candidates to say something nice about each other — only managed to expose that Trump can't even keep straight the talking points he invented.

"I will say this about Hillary. She doesn't quit. She doesn't give up. I respect that. I tell it like it is. She is a fighter," Trump said.

As many a Twitter wit noted, this directly contradicted the campaign message that Trump has been pushing for months now, which is that Clinton is weak, lacks "stamina" and is practically on death's door. Of course, those words are just coded language to shame Clinton for being female, as is Republican vice presidential nominee Mike Pence's repeated language about the need for "broad-shouldered" leadership. But Trump can't even remember the very basic lessons about the constitutional separation of powers, so remembering that he's supposed to pretend to believe Clinton is weak is beyond his limited capacities.

Even though he tried to spin it as a bad thing, Trump is right that Clinton has been in public service a long time. He said 30 years, but it's more than 40 and most of it was during a time when Trump was too busy bankrupting businesses and manipulating the legal system to foist the losses on others to care about public service. She is a fighter, as evidenced by the fact that she worked to create CHIP even after Congress destroyed her health care reform package.

And Clinton is a grown-up person who doesn't think it's cute to brag about sexually assaulting women. She doesn't threaten to have political opponents arrested on false charges, as Trump did during the debate. She doesn't become red in the face upon hearing political opponents disparage murderous dictators like Vladimir Putin, as Trump did during the debate.

These things should be obvious by now. But the bar has been set so low for Trump that, despite all that, we must endure chatter about how well he did — or even that he won.