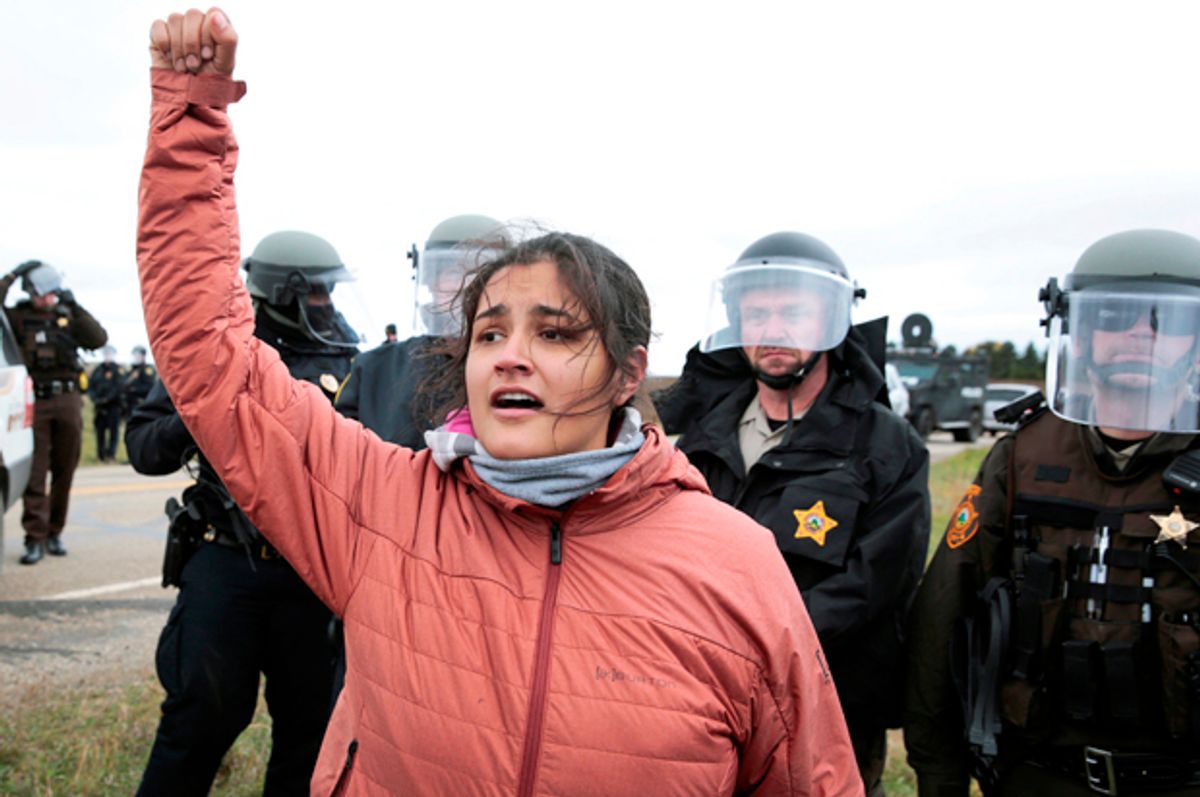 When I was a child, my late mother would call today’s holiday “Genocide Day,” in honor of the many ancestors of ours who lost their lives or were raped and pillaged when they were “colonized” by Cristobal Colon (Christopher Columbus) and his men during discovery voyages to the Americas.

Today is Columbus Day in many states, and the institutional genocide against Native people is still happening everywhere in the world. Lands and vital natural resources are being stolen — what's left of them, that is.

Few situations are more visible than the ongoing Dakota Access pipeline protests at Standing Rock, North Dakota. Though thousands of concerned citizens, both Native and non-Native, have traveled to support the Standing Rock Sioux in their quest to protect their water source from oil contamination, riot police have been called out today on protesters, some of whom have chained themselves to construction equipment.

Today on Columbus Day, many of us Natives are calling for special attention to situations like the Dakota Access pipeline because those in power still have a conqueror's mentality. Just a few hours ago, actress Shailene Woodley was arrested at Standing Rock, an event which she live streamed on her Facebook page.

There, protesters were handcuffed with plastic ties. As of this writing, her post had 2.3 million views, which means the world — or at least a decent online piece of it — is watching.

Because Columbus Day is an outmoded holiday that few people still want to celebrate, I encourage a shift to recognition of Indigenous Peoples’ Day. Instead of watching TV with your kids during dinner tonight, talk with them about the non-revisionist history detailed in texts like Howard Zinn’s classic overview of colonization.

By the time I was age 12 or so, my copy of Zinn’s “A People’s History of the United States” was dog-eared. I had read its astute retelling of Columbus’ arrival, and it was in stark contrast to what had been taught in my fairly progressive New York City public school. (I could only imagine what others had been taught in more conservative places.)

Columbus, my school's textbook said, was a brave, skilled sailor. He arrived on foreign shores and treated the Natives with respect. When I brought that text home, my mother was livid. She told me to read Zinn’s treatise on colonization, and, basically, weep. I did. The two versions of the past did not match up in the least.

As anyone who has taken elementary social studies knows, when Columbus crossed the Atlantic hoping to discover a new way to India, he ran into what is now the Dominican Republic. It was full of Taíno people, who were doing just fine on their own island without Columbus, thank you very much. He renamed the people and their land, and raped and pillaged its inhabitants. He called the Taíno “Indians” after his intended destination and the island Hispaniola.

Spanish settlers arrived soon after, and the Taíno were enslaved. As the enslavement went on for years, the Taíno population was reduced from the hundreds of thousands (some literature suggests far more) to around 30,000. The population’s precipitous decline was wrought by European diseases and violent attacks.

True, my mother and I are not of Taíno heritage, but as indigenous peoples we share a sad legacy, and it’s one that Columbus Day only serves to remind us of. For the past few years, a movement to replace Columbus Day with Indigenous Peoples' Day has surged forward, with states, cities and towns across America doing so. Indigenous Peoples' Day is nothing new (it began as a discussion about alternative protests and celebrations in the late 1970s and was first adopted in Berkeley), but the increased acceptance of it is.

Each year, Native and sympathetic journalists write about Indigenous Peoples' Day, and how and where it’s being celebrated instead of Columbus Day. Last year on "This Week Tonight," John Oliver put together a funny segment lambasting various American cultural celebrations tied to different heritages:

While initially, only South Dakota chose to celebrate Native folks instead of Columbus, in the past few years there has been a record increase in adoption of Indigenous Peoples’ Day on the second Monday of October. Just this year, Vermont and Phoenix have joined the list of places celebrating Indigenous Peoples’ Day. It is surprising to note that in spite of all the voices — primarily of Italian-American heritage — who indignantly support the recognition of Columbus as a national and international hero of their people, only 23 states give employees a paid day off today. Columbus Day remains one of 10 official federal holidays.

Everyone likes a day off.  But if you had occasion to not be obligated to go to work or your children did not have school today, consider spending some time educating them about real American history — Native American history. If your young child did have school, but came home reciting the age-old mnemonic rhyme about Columbus: “In fourteen hundred ninety-two, Columbus sailed the ocean blue/ He had three ships and left from Spain/ He sailed through sunshine, wind and rain,” please tell them that indeed Columbus did those things, but he also hurt the original inhabitants of our lands immeasurably.

The damage done thousands of years ago still resonates in places like North Dakota.  And this should not be forgotten, especially today.