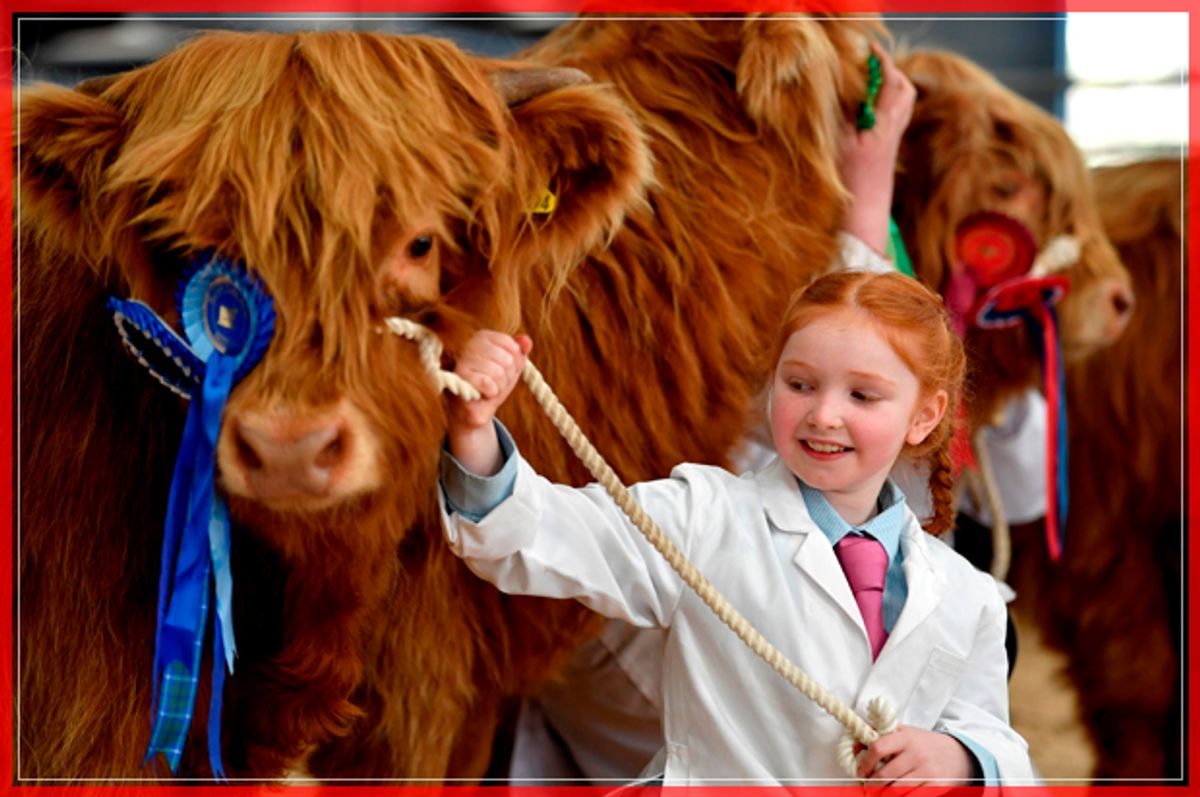 OBAN, SCOTLAND - OCTOBER 10: Eight year old Kate Cameron stands with Abernethy at the one hundred and nineteenth annual autumn sale of pedigree highland cattle on October 10, 2016 in Oban, Scotland. The show and sale is held over two days and is open to all highland breed enthusiasts, attracting many buyers from across Europe and North America. (Photo by Jeff J Mitchell/Getty Images) (Getty Images)
-- The Highland cow — or Heilan' coo, as the Scots say of their native beast — is the oldest registered breed of cattle in the world, with breeding records dating back to 1884. To the observer more used to American breeds of dairy and beef cattle, these shaggy-haired, hearty creatures can look as fanciful as a Jim Henson creation — Ludo, the rock-summoning, tortured monster of "Labyrinth," looks a bit like a bipedal Heilan’ coo — but their blood also runs through many American breeds, too, thanks to cross-breeding by New World cattle ranchers. There’s already something magical about the visible pride farm and ranch kids have in showing off the animals they help raise — imagine being able to say, as young Kate here can, that you have your own herd of Labyrinth Ludos at home, too. The ingenuity and civic engagement demonstrated here are admirable, as is this gentleman's deep understanding of how to effectively monetize irrational liberal panic. Of all the places to try and leverage a threat to vote for Trump, Manhattan seems like it would be one of the worst: a deeply blue city in a deeply blue state where one hundred thousand extra Trump votes wouldn't make a bit of difference. But none of that registers with cloistered Manhattanites who think every minor dip in Hillary Clinton's national polling average is a harbinger of President Trump, and who also think giving a dollar to a street mendicant is striking a blow for positive social change. I heard recently that the term 'seeing red' refers to chickens' tendency to cannibalize their own at the sight of blood. It seemed wrong but she owns several chickens and I didn't feel it was my place to question. I'm dictating this while driving. T-levels sky high.

Port Salut, Haiti   Rebecca Blackwell/AP
A salvaged chair hangs in a tree amidst nearby homes destroyed by Hurricane Matthew This was once inside someone's home. This was a place where someone sat and ate dinner, or played cards, or talked with friends. This was a place of a little rest at the end of the day. This is what remains now in Port Salut, Haiti, in the wake of Hurricane Matthew. A fragment, a wisp, a remnant of human life, shaken out and blown apart.