Re-thinking man's best friend: Why cats are fighting for the top spot of human affection 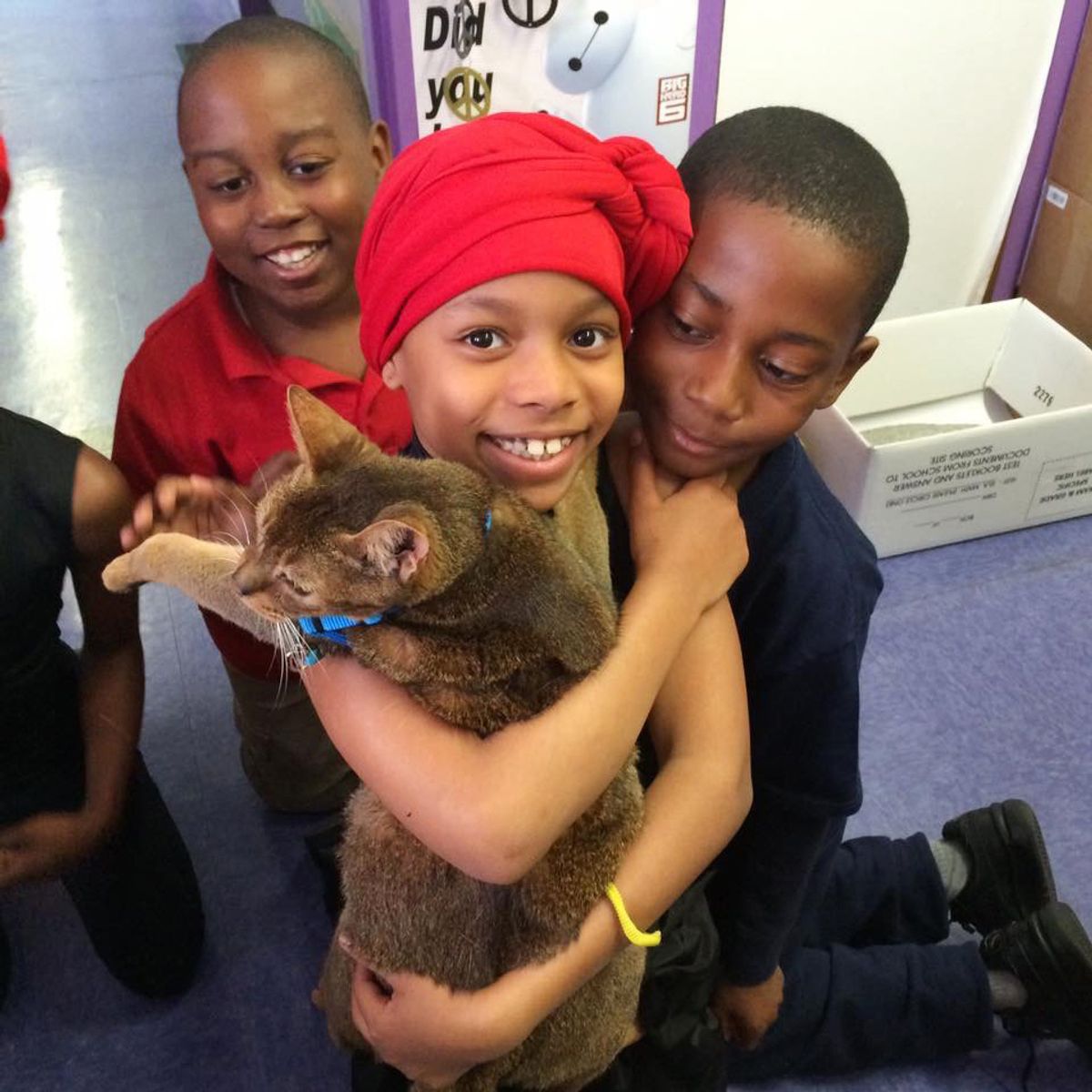 In this May 19, 2016 photo provided by Lisa Fernandez, school children interact with "Rubio," who is a poster cat for The Paw Project, an advocacy organization against feline declawing. Fernandez, a Brooklyn elementary school principal, leads a program to teach the schoolchildren about declawing and help them stage action against it. At rear left is Jacques Cadeau, Suleila Clarke, is in the foreground and Brandon Blue is at right. (Lisa Fernandez via AP) (AP)
--

The bird experts and authors of the book Cat Wars recently called for all free-roaming cats to be euthanised or kept on a lead. They argue that cats’ tendency to kill birds and small mammals has lead to a catastrophic decline in the numbers of these creatures. As humans’ most popular pet, it’s inevitable that cats would have some effect on the environment, but when it comes to cats we have lots to be thankful for.

Anthrozoology, the study of human-animal interaction – which encompasses aspects of medicine, veterinary science, education and social work – has revealed the significant benefit to people and the economy of pets, or “companion animals” to give them their preferred title. As cats are such common pets and their relationship with humans so culturally embedded, it’s not surprising to find that they have been the subject of many studies.

For example, The Cats Protection charity summarises the wealth of scientific findings highlighting the benefit of cats, including reducing childhood allergies and school absenteeism in children, improving mental health, especially in those with depression or post-traumatic stress, aiding diabetes control, and cutting down hospital stays. Caring for pets can promote independent living among the elderly, and help rehabilitate offenders.

Saving our health, and wealth

Florence Nightingale recognized the benefits of pets in aiding recovery, though her “pet” of choice was an owl, Athena, which she apparently carried in her pocket. Her beliefs have been supported by more recent research that found that pet-owners recover better from heart attacks than those that don’t own pets, are at a lower risk from coronary heart disease, suffer fewer minor ailments and make 15-20% fewer visits to their GP. Estimates in 2000 for cost savings to health care systems from pet ownership were for €5.6 billion (£3.6 billion) in Germany and $3.86 billion (£1.5 billion) in Australia.

With an aging population, the effects of dementia and similar illnesses is increasing. The National Institute for Health Research recognizes the promise of pets as alternatives or additions to medication to enhance cognitive function, language, motor skills and mood, and therefore improve the quality of life of those with dementia. However, other studies suggest robot cats even robot seals can have a similar affect (and are less likely to ladder your tights while kneading your lap or form a trip hazard in care homes, and as such may even be preferable to real cats).

The International Federation on Ageing acknowledge the “extensive and therapeutic benefits to elderly people provided by pets … and the associated positive social and economic influences for local communities and society as a whole”. It suggests more research in the area should inform better policies around healthy ageing.

The young benefit from experience of pets too. Children benefit from greater engagement in the classroom and through fostering empathy with animals become more compassionate to fellow humans

From persecution to purrfect

Undoubtedly the popularity of cats is high – just look at the cat take-over of Clapham Common tube station’s advertising hoardings. But although more households now own cats than dogs across Europe and America, we have not always appreciated them.

Cats were persecuted in Europe during the Middle Ages due to their lasting association with witches and witchcraft, and like witches were often burned at the stake. Pope Gregory IX even declared cats to be heretical. This antagonism towards cats wasn’t felt elsewhere in the Middle East or Asia, and was perhaps less strong in the nascent American colonies, as the colonists were grateful to cats for their part in ensuring the Mayflower’s safe passage. By that time, cats had become vital parts of a ship’s crew, keeping vermin at bay and preventing them from chewing through ropes or eating food that couldn’t be replenished at sea.

We still don’t understand our companions’ full capabilities. Take for instance Oscar the cat, whose uncanny ability to predict the coming death of elderly residents in a care home was even reported in the New England Journal of Medicine. It seems, through their prehistoric association with humans, dogs have hogged the research limelight, perhaps because they are considered more able to be trained to work within the human world. But, given their easier management and growing popularity, cats could yet become top dog in this research field.

From keeping us sane and healthy to protecting foodstuffs from vermin and people from plague, cats have done lots for us. What have we ever done for cats? We should repay their companionship with high-welfare cat-friendly environments and careful breeding – avoiding for example, breeds like the Scottish fold that appeal to our sense of cuteness but live unhealthy and painful lives. Even if you don’t, personally, like cats, consider the overall benefits they confer to society.