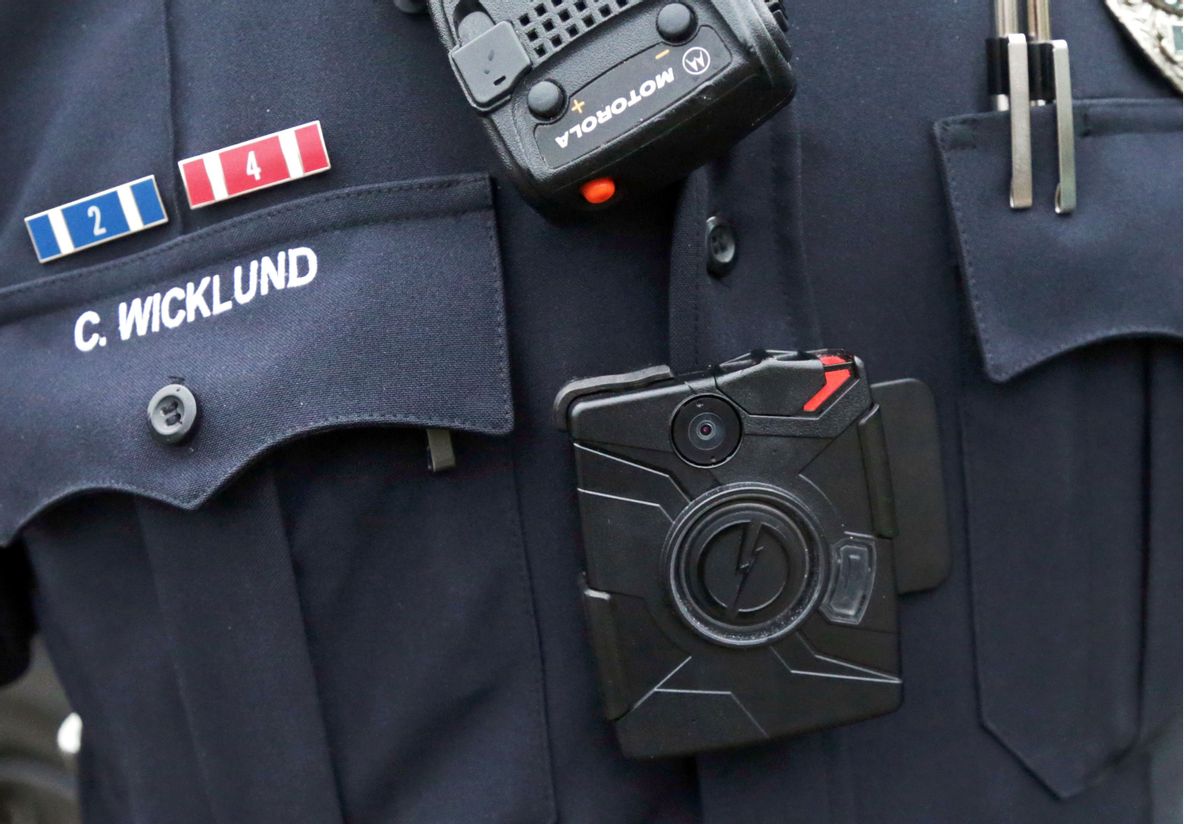 In this Nov. 5, 2014 file photo, Sgt. Chris Wicklund of the Burnsville, Minn., Police Department wears a body camera beneath his microphone. Cleveland's move to buy 1,500 police body cameras and data storage could cost up to $3.3 million over five years, a higher price tag than previously known and an illustration of the long-term costs of such programs with Taser International. (AP)
--

Body cameras were going to be black America’s saving grace. Technology was going to bring to light the horrors of police violence in communities of color, while the cameras would provide enough transparency to help rebuild trust in law enforcement in historically over-policed communities. But instead, police departments are simply finding ways to render body cameras useless in the fight for accountability.

Officials in every level of government have lauded body cameras. In 2013, 75 percent of law enforcement agencies were not using body cameras, but the following year, in the wake of the Ferguson grand jury electing not to bring charges against Officer Darren Wilson for the shooting of Michael Brown, an unarmed 18-year-old black man, President Barack Obama advocated for an increase in their usage. Even though the use of the cameras, in addition to the dashboard cameras installed in many police vehicles, has become more common, in subsequent killings of black men by police, there are notable instances of police either not activating the cameras or stalling the release of video footage to the public.

Last year, the Department of Justice awarded more than $23 million in funding to police departments in dozens of cities to implement body camera programs. Tulsa, Oklahoma—where Terence Crutcher was shot and killed by a cop after his car broke down—was awarded $600,000 through the program, but has yet to purchase any cameras. (Video of his death was recorded by cameras in a helicopter and on the dashboard of a police vehicle.) Other jurisdictions have spent funds from other sources for the purchase of body cameras for their police officers.

The Baton Rouge Police Department spent $105,000 on 100 body cameras. In July, two BRPD cops shot and killed Alton Sterling in a store parking lot after a homeless man allegedly called 911. Both of the responding officers were wearing body cameras, but claimed the cameras fell off during their interaction with Sterling. The storeowner also said the police department subsequentlyseized the surveillance camera footage from the store.

In one notable instance, a police officer in the nation’s capital simply did not turn on his body camera before responding to a call. In the second week of September, Terrence Sterling was shot and killed by police in Washington DC after a call was made to 911 about a man driving erratically. The officer’s body camera wasn’t turned on until after the shooting, prompting DC mayor Muriel Bowser to update the city's body camera policy; now, officers must verbally affirm with a dispatcher that their body cameras are turned on before responding to calls.

Perhaps the most telling recent incident involving body camera footage occurred in Charlotte, North Carolina, in September. Keith Lamont Scott was sitting in his car when Charlotte-Mecklenburg police officers approached the vehicle. As he exited the car, police shot him four times. Police first alleged he had pointed a gun at them, but witnesses said it was a book. After the police chief declined to release the body-camera footage of Scott’s shooting, protests and riots broke out in Charlotte. Marchers demanded to see the tape, and Governor Pat McCrory declared a state of emergency. Scott’s wife subsequently released her own cell-phone video to media outlets of the aftermath of the shooting. In the recording, viewers can hear her shouting that her husband does not have a gun.

When the Charlotte-Mecklenburg Police Department finally caved and released the police video, it provided the community with more questions than answers. There was no gun visible in the video, though police insisted it was there.

It is not uncommon for law enforcement agencies to fight the release of videos when the action on the recording doesn’t line up with the story they’ve told the public and the press. In 2014, Officer Jason Van Dyke shot and killed 17-year-old Laquan McDonald in Chicago. The city’s police department fought the release of the footage recorded on a dash cam for an entire year. When the footage was finally released to the public, it contradicted nearly everything Van Dyke said. He was subsequently charged with first-degree murder.

Now some states are trying to make it nearly impossible for the public to access body-cam footage. The shooting of Keith Lamont Scott came just days before a new state law blocking access to body camera footage went into effect. House Bill 972 removes from the public record video recordings made by law enforcement with body- and dash-cams; release of such footage to the public will require a court order. During the signing of the bill, McCrory said that allowing body camera footage to be a part of the public record can somehow "mislead and misinform" the public, because nothing says misinformation like full transparency. Louisiana tried to pass similar legislation earlier this year, but it was ultimately narrowed only to block public access to videos that violated privacy laws.

For too many law enforcement agencies, accountability is not on their list of priorities. In Oklahoma City, the municipal cops have not worn body cameras for three months due to a contract dispute between the city and the police union over when officers should be required to turn on their body cameras, and the terms by which videos are be released to the public. The dispute has held up contract negotiations between the city and the union. When the city of Boston launched a voluntary body camera program, the police commissioner was forced to randomly assign the 100 cameras because not a single officer volunteered.

Body cameras worn by police can be a very useful tool in documenting the facts of police interactions with members of the communities they police. But the tool is only as good as the rules that govern its usage, and the willingness of politicians and police chiefs to ensure that those rules are enforced.