BULLSH**TER OF THE DAY: Paul LePage, for delivering the most ludicrous Trump adulation yet

The Maine Governor sees a Constitutional crisis, and he knows just the authoritarian to solve it 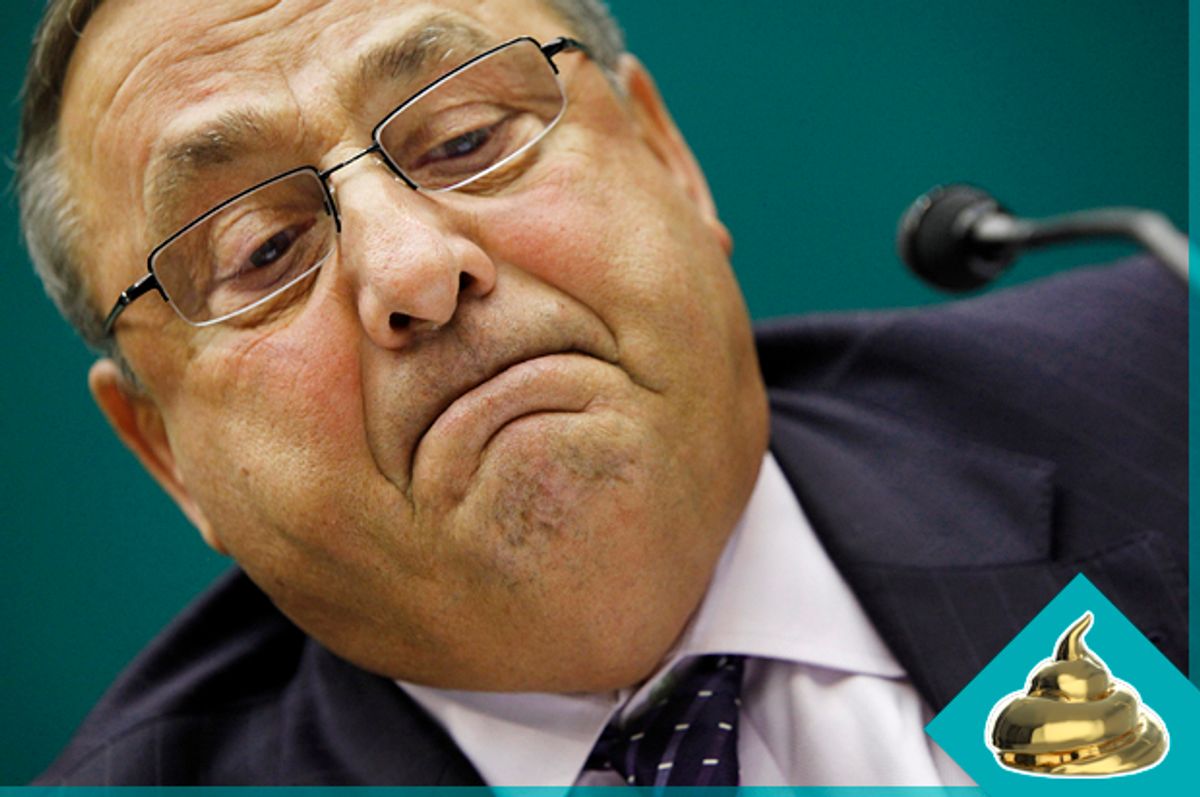 "Sometimes, I wonder that our Constitution is not only broken, but we need a Donald Trump to show some authoritarian power in our country and bring back the rule of law because we've had eight years of a president, he's an autocrat, he just does it on his own, he ignores Congress and every single day, we're slipping into anarchy."

Just as a parade of Republicans is marching backwards, away from Donald Trump, LePage went on CNN to make sure the world knows he continues to give his full support to a candidate who makes vulgar and degrading comments about women and thinks sexual aggressions are something to brag about.

This whole interview is such a load of bullshit that it is almost overwhelming to try to make sense of it. There are lies, opinions-turned-facts and – perhaps worst of all – condoning of Trump's lewd behavior. And then there is his twisted logic. First, there's his misguided notion that a broken constitution needs an authoritarian leader to fix it, which is to say that a democracy needs a dictator in order to function. Then he somehow manages to criticize Obama for being an autocrat (which is bullshit in and of itself) and proposes the "authoritarian figure" of Donald Trump as a solution to that problem. How is an authoritarian leader not essentially the same as an autocrat? But let's say we overlook that, and accept his bullshit definition of Obama as an autocrat. How do we square the notion of an autocrat turning the country into anarchy? Please, Mr. LePage, help us out here!

LePage belongs on the Mount Olympus of bullshit shovelers. His political record is a bullet list of one self-inflicted crisis after another. For example, there's the time he said that the vast majority of drug dealers in Maine were black or Hispanic, claiming to keep a binder of charged criminals to prove it – and then the binder appeared and it was overwhelmingly white people. Or the time he threatened State Representative Drew Gattine, saying "I'm after you" in an obscenity-laced voice message (no wonder he endorses a presidential candidate who also threatens opponents with promises of abuse of power). Or when he said that asylum-seekers brought disease and the “ziki-fly.” These are just SOME of his gaffes from 2016 alone, but you get the idea.